As Attorney General Barr travels the globe to pressure our allies into supporting conspiracy theories about the origins of the Trump-Russia investigation, we should all keep in mind that the entire episode that led to Trump’s impeachment inquiry is also rooted in conspiracy theories. In his written complaint, the whistleblower outlined them.

* that Ukrainian officials—namely, Head of the National Anticorruption Bureau of Ukraine Artem Sytnyk and Member of Parliament Serhiy Leshchenko—had “interfered” in the 2016 U.S. presidential election, allegedly in collaboration with the DNC and the U.S. Embassy in Kyiv;

* that the U.S. Embassy in Kyiv—specifically, U.S. Ambassador Marie Yovanovitch…had allegedly obstructed Ukrainian law enforcement agencies’ pursuit of corruption cases, including by providing a “do not prosecute” list, and had blocked Ukrainian prosecutors from traveling to the United States expressly to prevent them from delivering their “evidence” about the 2016 U.S. election; and

Those allegations are what Rudy Giuliani is talking about when he waves documents around during his appearances on Fox News. He was fed that information by Ukrainian prosecutors: Viktor Shokin and his successor Yuriy Lutsenko. We’ve heard a lot about Shokin, who was fired at the request of everyone from Joe Biden to our Western allies and anti-corruption groups in Ukraine. Here is what the whistleblower wrote about Lutsenko.

The allegations by Mr. Lutsenko came on the eve of the first round of Ukraine’s presidential election on 31 March. By that time, Mr. Lutsenko’s political patron, President Poroshenko, was trailing Mr. Zelenskyy in the polls and appeared likely to be defeated. Mr. Zelenskyy had made known his desire to replace Mr. Lutsenko as Prosecutor General. On 21 April, Mr. Poroshenko lost the runoff to Mr. Zelenskyy by a landslide. See Enclosure for additional information.

In other words, Lutsenko was fighting for his political survival at the time he made the allegations, which he later retracted.

Back in July, Buzzfeed reporters wrote an in-depth profile of the two men who arranged for both Shokin and Lutsenko to meet with Giuliani in order to bring their allegations to the attention of the Trump administration: Lev Parnas and Igor Fruman.

Both men were born in the Soviet Union and had immigrated to the United States — Parnas in 1976, when he was 4, and Fruman as a young adult.

Both eventually settled in South Florida, where Parnas worked for three stockbrokerages that were later expelled by regulators for fraud and other violations — though he was never individually charged — and racked up nine court judgments for failing to pay loans and other debts. One of his businesses, Fraud Guarantee, set up to help people safeguard against fraud and other financial crimes, was evicted in 2015 for not paying the office rent, records show.

Fruman, 53, continued to make his money in Ukraine, running an export business that ships goods to and from the United States and a boutique hotel in Odessa — long known as a hub for both tourism and organized crime. One of his investments, a milk canning plant, was declared bankrupt seven years ago over debts that reached nearly $25 million.

Given that these two men are not only fraudsters, but bad fraudsters, it might seem surprising that last year they began pumping big dollars into the coffers of Trump super PACs and Republican campaigns. For example, in May 2018, a company owned by Parnas and Fruman, Global Energy Producers, made a $325,000 donation to America First Action, a political action committee supporting Trump’s re-election. ABC News reported that “the company has no listed office address or phone number, no announced deals or contracts, and a bare bones one-page website that features only a countdown clock that long ago ticked down to zeros.”

Because of a lawsuit alleging fraud brought against Parnas, he was forced to turn over bank records “that showed a company he owned had received a payment of $1.26 million from the client trust account of a lawyer specializing in real estate and foreign investments.” The donation to America First Action was made two days later and within a week, Parnas and Fruman posted a photo of themselves at breakfast with Donald Trump Jr. at the Beverly Hills Polo Lounge. 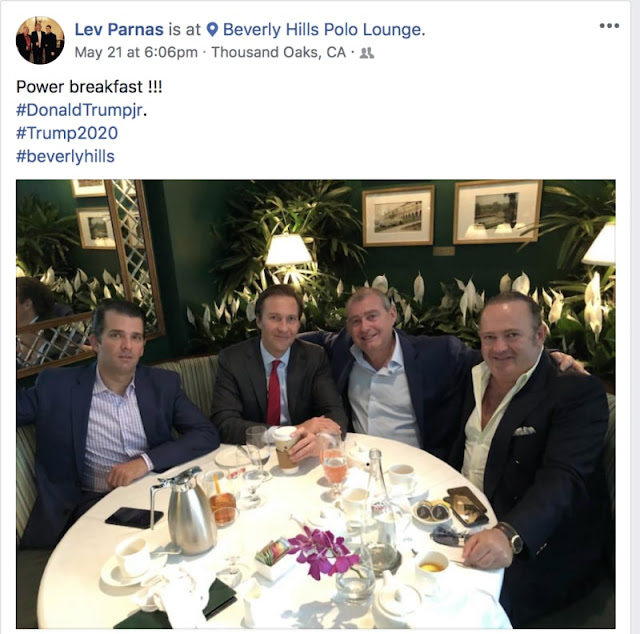 It was also in May 2018 that Parnas and Fruman began their “tour of four countries to meet with Ukrainian authorities and unearth critical information on Trump’s potential 2020 challenger Joe Biden as well as Trump’s former opponent, Hillary Clinton.” What they unearthed were the conspiracy theories that were then relayed to Giuliani.

According to the Miami Herald, both Parnas and Fruman have received subpoenas this week from House committees “seeking documents and noticing depositions.” One of the most important points of inquiry should be to identify the source of the $1.26 million that landed in their bank account.

A couple of days ago, Josh Marshall tweeted this.

a small little prediction: this'll all come back to russia https://t.co/pyVuIZRni6

I suspect that he will eventually be proven right about that.

UPDATE 3:05 p.m.: The Buzzfeed article linked above tells the story of how Parnas and Fruman tried to get Ukranian oligarch Ihor Kolomoisky help them set up a meeting between Giuliani and the new Ukranian president, Volodymyr Zelensky. On Thursday, Josh Rogin updated the story (emphasis mine).

In May, Kolomoisky told Ukrainian media, in an interview barely noticed in Washington, that two of Giuliani’s business associates, Lev Parnas and Igor Fruman, came to visit him in Israel in April to “demand” he set up a meeting between Giuliani and Zelensky…

“They wanted to have a meeting with Zelensky and show Giuliani that they had organized everything,” Kolomoisky said. “A big scandal may break out, and not only in Ukraine, but in the United States. That is, it may turn out to be a clear conspiracy against Biden.”…

Kolomoisky, in his May interview, claimed to have lots of evidence about Giuliani’s efforts with Parnas and Fruman to dig up dirt on Biden and get various Ukrainian officials to help. He claims to have text messages from Parnas and Fruman detailing Giuliani’s motives and receipts of money they were paid.