The conventional response by pundits to presidential debates is to pick winners and losers. From the lists I have seen after Tuesday night’s debate, the names that pop up as winners include Warren, Sanders, Buttigieg, and Klobuchar. But given that there were twelve candidates on stage, it is impossible to extricate the discussion about who won from the amount of time they had to express their views. Here is what the New York Times reported on how that broke down Tuesday night. 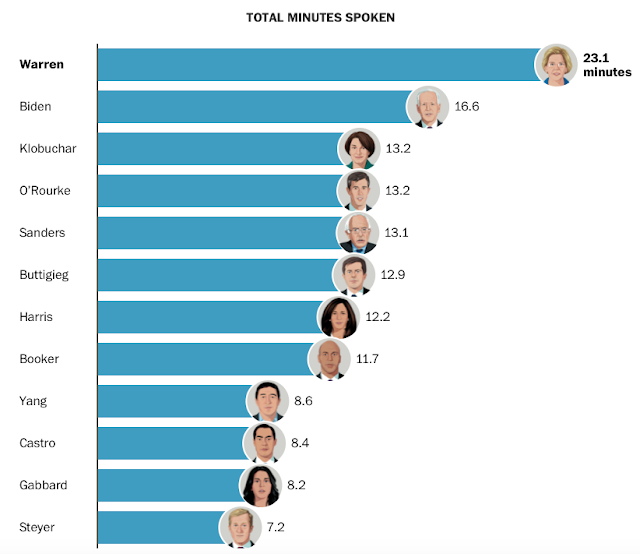 As the perceived frontrunner, it is only natural that Warren got the most time. That is because the moderators focused on her, as well as the fact that she was given time to respond when other candidates referenced her positions. The fact that Biden came in second on the amount of time, but didn’t make the cut when it comes to winners, indicates that he didn’t make the best use of his opportunities.

The person who tied for third in the amount of time, Klobuchar, is a bit of a surprise, given that she is definitely not a candidate who ranks in the top tier of contenders. So she was given an opportunity and did a fairly good job of using it. You can’t say the same for O’Rourke.

One of the reasons Sanders has been declared a winner is that he was perhaps even more animated than he has been in previous debates, which did a good job of addressing the concerns that had been sparked by his recent heart attack.

The time allotted to the rest of the field is pretty commensurate with their position in the race. That means that, in order to be considered a winner, they had to create a break-out moment with the few minutes they were allotted. A lot of people saw Buttigieg as the candidate who was able to do that. He engaged in confrontations with Warren, O’Rourke, and Gabbard that, at times, became combative. When judging winners and losers, that is exactly the kind of thing pundits tend to zero in on.

Left out of this kind of analysis are a couple of moments during the debate that stood out to me. They happened when candidates who aren’t considered top-tier used their small amount of time in ways that were powerful statements. Because they weren’t combative, they didn’t get as much attention.

The first came after Warren, Sanders, Biden, Buttigieg, and Klobuchar had once again engaged in the kind of debate we’ve heard several times about health care. The moderators then turned to Harris.

Republican legislatures need to keep their hands off of women's bodies. #DemDebate pic.twitter.com/YVywwyu1vY

You could almost hear women across America standing up to cheer that one. But then, Booker put an exclamation mark on the point.

First of all, Booker basically called out Anderson Cooper for beginning the debate by asking Biden about his son’s involvement in Ukraine. Then he took up the cause of women’s reproductive health care and said, “God bless Kamala, but women should not be the only ones taking up this cause and this fight.” You can see Harris smile and say, “that’s right.” What struck me was that she wasn’t responding as a competitor, but as a woman. I doubt that many men understand what it means to women for someone to stand up that strongly as an ally.

The other moment that stood out to me was during a discussion of Warren’s proposed wealth tax. She ended her defense of the policy with this.

Warren suggested that the candidates who are proposing other tax plans are doing so in order to protect billionaires. That is straight out of Sanders’ 2016 playbook and is nothing more than an attempt to end debate by accusing your colleagues of being corrupt.

Klobuchar responded immediately with this.

She was referring to Steyer, who had already said this.

Well, first of all, let me say this. Senator Sanders is right. There have been 40 years where corporations have bought this government, and those 40 years have meant a 40-year attack on the rights of working people and specifically on organized labor. And the results are as shameful as Senator Sanders says, both in terms of assets and in terms of income. It’s absolutely wrong. It’s absolutely undemocratic and unfair.

I was one of the first people on this stage to propose a wealth tax. I would undo every Republican tax cut for rich people and major corporations.

Once again, Cory Booker used his time wisely to address the issue.

While not naming Warren specifically, Booker pointed out that “how we talk about each other in this debate really matters” because Democrats have one shot at ensuring that Trump is a one-term president. He went on to say that he’s seen this script before, it didn’t work in 2016, and will be a disaster in 2020. Booker then brought up the violence of child poverty, noting that the United States ranks last on that issue among industrialized countries. He ended by saying that Democrats shouldn’t define themselves simply by what they’re against, but by talking about who and what they are for.

Booker followed that up with an email the campaign sent out on Wednesday.

I woke up this morning with a feeling that, for voters tuning in for the first time to see what Democrats have to offer, a lot of last night was a missed opportunity for our party. Too much time was spent attacking one another or repeating Republican talking points about our well-intentioned policy differences…

We win this election by being willing to come together, to say we’re the party of lifting every single person up. We win not by just telling voters we’re against Trump — but by showing people how much better, how much more decent, how much more boldly American we can be.

This election is not a referendum on one guy in one office. It’s a question of who we are and who we should be to each other.

Both Buttigieg and Booker got about half the time Warren did on stage Tuesday night. I understand that pundits and partisans zeroed in on the former’s combativeness, because that is how we tend to do politics right now. But I would suggest that plays right into the hands of Republicans, because I agree with something Barack Obama said years ago.

I firmly believe that whenever we exaggerate or demonize, or oversimplify or overstate our case, we lose. Whenever we dumb down the political debate, we lose. A polarized electorate that is turned off of politics, and easily dismisses both parties because of the nasty, dishonest tone of the debate, works perfectly well for those who seek to chip away at the very idea of government because, in the end, a cynical electorate is a selfish electorate.

I recognize that this makes me an outlier, but for my money, Cory Booker won the debate on Tuesday night because he used the small amount of time he was given very wisely.