Anyone who has attempted to follow the lawless machinations of the current president knows what a valuable resource Natasha Bertrand has been—starting with her days as a reporter at The Atlantic and through her current position at Politico. That’s why it didn’t really surprise me to see one of Trump’s chief enablers go after her on Twitter recently.

Do not trust this so-called "reporter." She's an IC embed, a stenographer for Brennan & Comey. Their surrogates are spoon-feeding her the "national security" stories she's now "reporting" @ POLITICO. She's a political-intel operative posing as a journalisthttps://t.co/KHcFNHGiAC

The name Paul Sperry might ring a bell because, writing at RealClearPolitics, he was the first one to out the name of the person he believes to be the whistleblower. When it comes to reporters that can be trusted, Sperry obviously isn’t one of them.  Here is something he tweeted on the same day as that lie about Bertrand.

BREAKING: The "whistleblower's" attorney has privately informed HPSCI staff that his client, a CIA officer, has not received credible threats, as Schiff has suggested;and he is not at personal risk since he nonetheless has been assigned a government security detail for protection

The response from the whistleblower’s lawyers was unequivocal.

This tweet is absolute LIE. No one on legal team has spoken to HPSCI Member or staff abt #whistleblower safety. We continue to receive daily threats & harassing comms that law enforcement takes seriously. Our last comm to HPSCI was to offer GOP written responses.#FactsMatter https://t.co/mBEAck8D9G

But perhaps Sperry had a heads-up on a story that broke on Monday. Politico is being sued by a White House aide due to reporting by Bertrand. That was the banner story at Fox News by Howard Kurtz. 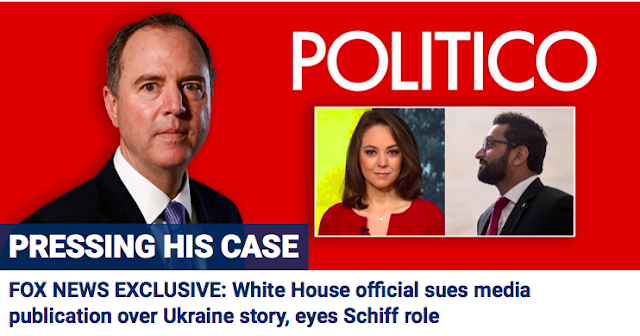 The impeachment inquiry against President Trump has triggered a wave of charges, countercharges, court battles, subpoenas and legal threats.

Now it has produced its first libel suit.

Kash Patel, the National Security Council’s senior counterterrorism director, is seeking more than $25 million in damages in the suit filed in Virginia. We have reached out to Politico for comment.

The lawsuit also names Natasha Bertrand, a Politico reporter and MSNBC contributor, as well as Politico owner Robert Allbritton. The allegations, which center on what the president was told about the situation in Ukraine, go to the heart of the case for impeachment.

That last line is a bit of overkill, because Patel’s story is simply a sideshow. He was a long time staffer for Representative Devin Nunes prior to joining the White House in February of this year. Last month, Bertrand reported that, according to Fiona Hill’s deposition, Patel “was so involved in the issue that at one point Trump thought he was in charge of Ukraine policy for the National Security Council.”

Here is how Jacob Schultz summarized that portion of Hill’s testimony.

Hill described additional intrusions into the Ukraine portfolio from surprising sources. For one, she reported concerns about the involvement in Ukraine issues of Kash Patel—a former aide to House Intelligence Committee ranking member Devin Nunes, who now works in a different section of the NSC than does Hill—after a staffer erroneously implied that Patel, not Alexander Vindman, was the NSC director for Ukraine. This interaction made Hill concerned that the president actually thought Patel was in charge of Ukraine at the NSC and that Patel had been sending NSC material to Trump without authorization. Hill reported her concern about Patel to Charles Kupperman, who is in charge of NSC staffing, in addition to Kent and Taylor.

In other words, Bertrand’s report was accurate. But she got the story before the transcript of Hill’s testimony was released and clearly stated that it was “described to POLITICO by a person with direct knowledge of her recent deposition.”

According to Kurtz, the lawsuit is designed to go after Representative Adam Schiff.

Schiff is a major target. The suit, which includes its share of Trumpian language, says the defendants “acted in concert” with the congressman or his aides to further the impeachment probe. The alleged purpose was to “destroy Kash’s reputation” as a lawyer and presidential aide to further “Schiff’s baseless Ukrainian quid pro quo hoax.”

Here’s the crux of the lawsuit.

Between October 14, 2019 and November 8, 2019, Politico and Bertrand colluded, collaborated and conspired with Schiff to defame Kash. Schiff, or members of his staff or aides acting at his direction, leaked to Bertrand the closed-door testimony that Hill and Vindman gave in the subfloor of the Capitol Visitor Center. The leaks occurred in real-time. Schiff leaked the testimony to Bertrand because Schiff knew that it would be a violation of House Rules and Committee Rules for Schiff to publish the substance of the testimony himself. The joint collaborative purpose of the leaks was to publish Hill and Vindman’s false and defamatory statements, including Hill and Vindman’s egregious personal attacks on Kash, so as to further Schiff and Politico’s interests in harming the President and advancing the impeachment inquisition.

The truth of the matter is that this is all nonsense. Someone leaked accurate information about Hill’s testimony to Bertrand two weeks prior to that testimony being made public by none other than Schiff himself. Even though this specific information about Patel is not central to the impeachment probe, he is suing Politico and Bertrand for what Fiona Hill said during her testimony. Somehow all of that amounts to a conspiracy between Bertrand and Schiff to advance the “impeachment inquisition.”

Between Sperry’s tweet and this news it certainly looks like Trump’s enablers are taking out the long knives to go after Natasha Bertrand. This is a blatant attempt to intimidate a reporter who has consistently told the truth about this administration.

While I’m sure that it is a frightening prospect to have Trump’s enablers attack her in this manner, it speaks to the strength of Bertrand’s reporting that she has become their target. I stand with her 100 percent.