As the month of January approaches—when history tells us that early state voters make up their minds—perhaps the best indicator of what is happening in the Democratic presidential primary comes in the form of polling aggregates, like the one at RealClearPolitics. 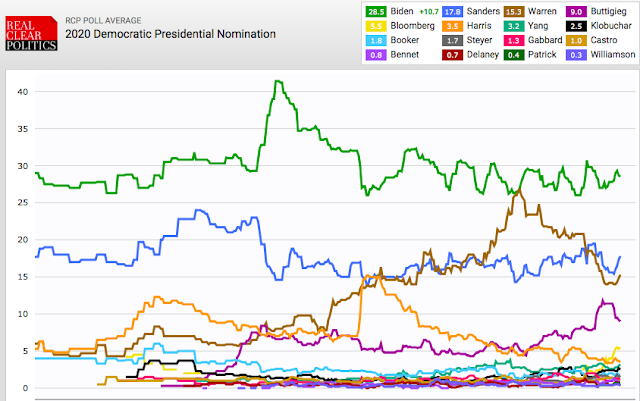 The big picture is that, after a surge when he initially announced his candidacy, Biden maintains his lead, while Sanders continues to hold steady. Warren surged in September, but her support has dropped precipitously since then. It might be too early to tell, but Buttigieg may have peaked in November and then started a descent. At this point, it is still possible for one of the lower-tier candidates to surge, but we haven’t seen any evidence of that on the horizon.

What we’ve witnessed is that as soon as a candidate begins to develop momentum, they have been subjected to challenges from their opponents and heightened media scrutiny. That seems to have significantly damaged both Harris and Warren. The same thing might be happening right now to Buttigieg. Biden has been under the microscope since he entered the race, but that doesn’t seem to be having any effect on his support. The one candidate who hasn’t garnered that kind of attention is Sanders. Perhaps that is due to the fact that his support has remained steady without any burst of momentum.

What will happen once the voting actually begins in the early states is that candidates could develop momentum based on either winning or outperforming expectations. With the compressed primary schedule, attention from competitors and the media won’t have as much time to impact that kind of surge. That is what Ella Nilsen calls the “momentum primary.”

The traditional path to the Democratic nomination — and the one that most top-tier candidates are pursuing, to varying degrees — starts in Iowa and New Hampshire. The importance of these first two states is not the amount of delegates each contains; it’s the Election Night headlines about who won, and who overperformed expectations.

Momentum is the reason why candidates are disproportionately spending more time in Iowa, New Hampshire, Nevada, and South Carolina than anywhere else in the country right now. The media narrative drives the early state primaries, and candidates who can win or change the narrative in these states are statistically much more likely to win the nomination.

Right now the polling from Iowa and New Hampshire is all over the map. For example, here are the ones tracked by FiveThirtyEight in Iowa since the beginning of November. 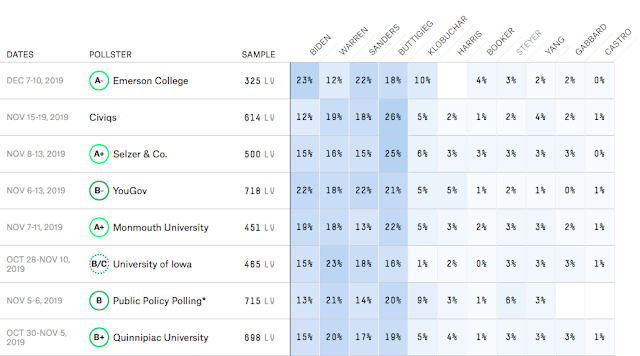 As you can see, over the last month and a half, each of the four top candidates has led in at least one poll. The same thing can be said for New Hampshire. In other words, the first two states—the initial momentum primary—are up for grabs. When it comes to Nevada and South Carolina, Biden maintains a strong lead.

Unless Iowa and New Hampshire change the race dramatically, the candidate to beat is Joe Biden. That’s why the betting markets currently give him a 4 point edge. It would be a mistake to assume that this signals the dominance of so-called “centrists” in the Democratic Party. Biden’s lead is attributable to the fact that he has been able to build the kind of coalition that is necessary to win the Democratic nomination. If no one else is able to do that, Biden will probably cover the odds.