Kristin Tate asked a question that caught my attention: “How can top Democrats run the economy with no business skill?” The first thing that jumped out at me was the assumption that a president runs the economy. That is an especially authoritarian premise from someone, like Tate, who identifies as a libertarian. While it’s true that federal policies have an impact on the economy, they are hardly the sole purview of the president. Not only is Congress often involved, Donald Trump has been endlessly frustrated that the Federal Reserve Board has the ability to act independently.

Beyond that, Tate argues that the problem with the current leaders in the Democratic presidential primary is that they have no business experience.

For all of the talk of the Green New Deal, most of the focus of Democrats is not on the economic health of the middle class. To a certain extent, however, you cannot even blame them. Top tier candidatesJoe Biden, Elizabeth Warren, and Bernie Sanders have no point of reference on what makes the free market work. Moreover, none of the three can claim credit for creating a single private sector job in the last 50 years. Instead, they are ignorant of the processes that create job growth. Our economy is at full employment for the first time in two full decades. Why would the nation jeopardize this for candidates who have close to zero experience in the free market?

Of course, all of the current candidates have spent considerable time talking about how to improve the “economic health of the middle class.” That’s not the issue. Tate simply doesn’t agree with their proposals. She assumes that, because they don’t buy into what George H.W. Bush once called “voodoo economics” (ie, trickle-down economics), they aren’t proposing anything. She credits all of that to the fact that they lack business experience and therefore, don’t understand how free markets work.

This is the same old argument we’ve been hearing from Republicans for decades. It usually comes in the form of support for GOP candidates who have been CEOs, which is often seen as the kind of experience that qualifies someone to be president.

As I’ve mentioned before, you would think that the presidency of Donald Trump would have disabused us all of that notion. But while Tate doesn’t specifically mention the current occupant of the Oval Office, she does tout the fact that we are “at full employment for the first time in two full decades” and, when talking about Biden, refers to “his bridge to back toward a dire economy.” The idea that the economy was in dire straits under the Obama administration and has soared since Trump was elected is perhaps the most pernicious lie that has gained traction over the last three years. Here are the facts about job creation in graph form.

Jobs graph from the BLS website. I added the arrows. Can any #MAGA2020 people tell the difference between the graph during Obama and the graph during Trump? One was "American carnage" the other is the "greatest economy ever," says Trump. pic.twitter.com/KetVgDBMWh

For the conservatives who constantly suggest that the federal deficit will eventually cripple the economy, the facts about the Trump presidency are clear. 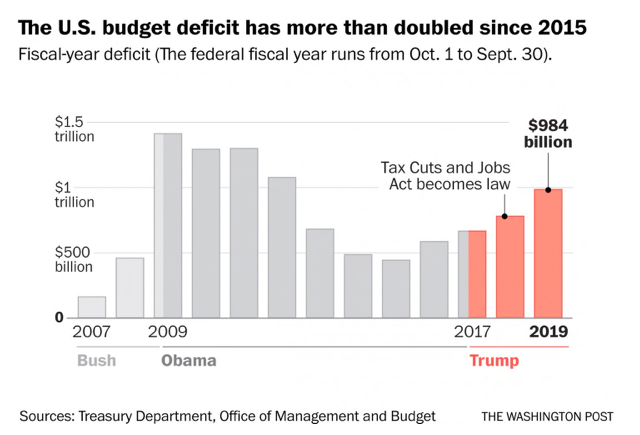 The premise that experience as a business executive is the best background for the presidency permeates the Republican Party because the people they tend to admire the most are CEOs who make a lot of money. They assume that running a company is similar to running the federal bureaucracy. We see that same assumption at the state and local level.

One of the best responses to that argument that I’ve heard came when the incumbent mayor of St. Paul, Chris Coleman, was challenged by Republican business executive Eva Ng. Here is how Minnesota Public Radio described an exchange between the two during a debate.

[Ng] said if she were elected mayor, she would freeze property taxes, which have risen every year that Coleman has been in office. And while she didn’t specify what she would cut to balance the budget, Ng said fiscal troubleshooting is her forte.

“So when you go into a company that is sick, you not only look to help them streamline what they’re spending, you also look for ways to help them create new income,” Ng said. “We’ve got to do projects that are cash-flow positive to put St. Paul on a long-term course of stability and self-sufficiency.”

But Coleman countered that running a business isn’t the same as running a city. He said while businesses can kill ventures that fail to turn a profit, a city is obligated to offer basic services.

Governments are required to provide essential services that can’t simply be “streamlined” because they don’t make a profit. It is in that sense that many CEOs have to unlearn everything they’ve done in the private sector to be successful mayors, governors, or presidents.

But there is another thing CEOs have to unlearn in order to be successful public servants. I am reminded of something that happened when Rick Scott—who had been the CEO of a health care corporation—became the governor of Florida.

When Florida Gov. Rick Scott (R) inexplicably rejected federal transportation funding for his state, apparently because he doesn’t like [Obama], some of the loudest criticism came from Florida Republicans, whose constituents will suffer as a result of the governor’s recklessness.

The heart of the problem was that Scott was deliberately turning down thousands of jobs in a state with high unemployment, and turning his back on millions of dollars of economic development. But part of the political problem is that the governor acted unilaterally — he hadn’t told other GOP officials what he planned to do, didn’t seek their input, and didn’t care what anyone else at any level of government thought.

Scott says he’s just acting like a CEO. Florida Republicans know this, and want him to stop.

CEOs are accustomed to acting unilaterally, often without input from their colleagues. Even Republicans in Florida weren’t willing to go along with that kind of treatment from Scott.

Former PespsiCo CEO Indra Nooyi is one of the few business executives who understands the difference between running a company and the federal government. Here is what she said when Fareed Zakaria asked her what she thought of Barack Obama as a leader.

NOOYI: Yes. And then imagine that your functional team, you can’t hire them without the approval of your executive team.

ZAKARIA: Half of whom want you to fail.

NOOYI: That’s exactly right. Also imagine that every word you say is debated in the public media every minute of the day. Also remember that your board of directors is a fragmented group who really cannot get together to fire the executive team if they don’t tow your line.

NOOYI: That’s exactly right. That’s the environment in which the president of the United States is working today. It’s not as if the president is maintaining a successful country. The president is turning around a difficult situation. So all things considered, you’d say he’s doing a pretty good job.

For my money, Tate gets it completely backwards. Nooyi accurately describes the challenges of being president of the United States. It’s not that having a background in business is disqualifying for the position, but a candidate with that kind of experience needs to demonstrate a completely different set of skills than the ones they employed as CEO.

In addition to concerns about the ability to use their own fortunes to buy the Democratic nomination, candidates like Bloomberg and Steyer shouldn’t get a pass on addressing those questions.