On Wednesday, the House of Representatives held a full day of debate on two articles of impeachment against Donald Trump. The first charges him with an abuse of power for pressuring Ukraine to assist him in his re-election campaign by damaging Joe Biden’s reputation. The second charges him with obstruction of Congress for blocking testimony and refusing to provide documents in response to House subpoenas in the impeachment inquiry.

As is often the case with major votes, the word “debate” doesn’t adequately capture the exchange that occurred between Democrats and Republicans prior to the vote. The whole exercise was more about giving members the opportunity to go on record with the conclusion they had already reached.

The most common refrain from Republicans about the two articles of impeachment was that the whole process was a sham because Democrats hate Trump and have been trying to get him impeached since he was inaugurated. In the midst of all that, there were a couple of truly bizarre moments. For example, Representative Mike Kelly compared the whole impeachment process to Pearl Harbor.

Rep. Mike Kelly compares the impeachment of Donald Trump to the bombing of Pearl Harbor pic.twitter.com/Kdu1CdragH

Even more bizarre was the moment when Representative Barry Loudermilk compared Donald Trump to Jesus Christ.

Rep. Loudermilk: "When Jesus was falsely accused of treason, Pontius Pilate gave Jesus the opportunity to face his accusers." pic.twitter.com/HqlRYFMIaN

Of course, there were also moments of passion from some of the Democrats. But one of the speeches that stood out to me came from Representative Lloyd Doggett, perhaps because it was equally profound and thoughtful.

Each of us pledges allegiance to the flag of the United States and to the Republic for which it stands. Not to one man who would be king.#TrumpImpeachment pic.twitter.com/QODqH5QcaA

The outcome of this debate was never in doubt. In the end, the House voted to impeach Donald Trump for article one by a vote of 230 to 197.

As expected, the two Democrats who voted “no” were Representatives Jeff Van Drew of New York and Colin Peterson of Minnesota. In addition, Representative Tulsi Gabbard voted “present,” confirming many of the concerns about her presidential candidacy.

The vote on article two was similar, at 229-198. The only change was that Democrat Jared Golden of Maine voted against impeachment for obstruction of Congress. 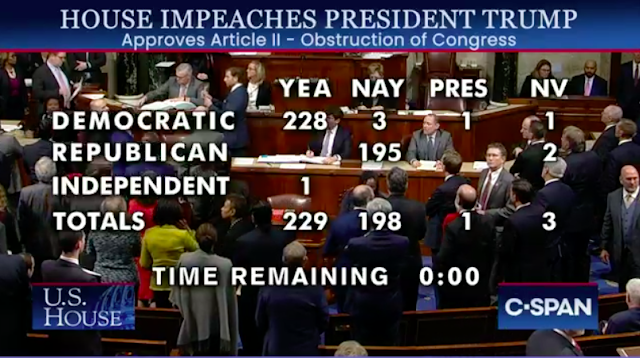 Regardless of what happens in the Senate, Donald Trump will go down in history as one of only three presidents to be impeached.