On Thursday, Julián Castro became the latest Democratic candidate to drop out of the presidential race. Back in August, I wrote about why his candidacy mattered. One of the reasons was that many of his proposals on things like immigration reform, universal pre-K, lead abatement, criminal justice reform, police reform, and housing became the templates that other candidates incorporated into their plans.

Over the last couple of months, however, Castro has taken on an issue that all of the other candidates avoid like the plague.

This week Castro is doing what few candidates laser-focused on winning would dare to do: question the fairness of the presidential primary system itself. Specifically, he is noting that Iowa and New Hampshire, the two big, bellwether states whose voters largely determine who has the White House goods, are lacking in racial and ethnic diversity. Iowa, which famously holds the first caucus of the primary season, is about 91% white while New Hampshire is 94% white.

“I actually do believe that we do need to change the order of the states,” Castro said in an interview with MSNBC on Sunday from, yes, Iowa. “Demographically, it’s not reflective of the U.S. as a whole, certainly not reflective of the Democratic Party, and I believe other states should have their chance.”

We can all agree that politically, a statement like that isn’t a huge risk for a candidate who had no chance of winning either Iowa or New Hampshire. But Castro gave voice to an issue that is becoming increasingly important for Democrats to confront.

If the 2020 Democratic primary plays out as the polls indicate right now, the predominantly white voters of Iowa and New Hampshire will produce results very different from the two more diverse states that follow: Nevada and South Carolina. Given that white Democrats are actually a minority of primary voters (approximately 40-45 percent), the first-in-the-nation states fail to capture the kind of coalition that is required to win the nomination. But as Castro points out, their status also skews the issues that are highlighted.

There’s a difference between states that are diverse and those that are not. If people are living and working around people that are different from themselves, they’re more likely as people and as voters to understand a range of different issues in more depth.

Contrary to what a lot of people believe, putting Iowa and New Hampshire first was not intentional and isn’t the way things have always been. Before 1968, most states didn’t even hold presidential primaries. As Leonard Stark has  documented, Iowa solidified its role as the first caucus state in 1972. New Hampshire did the same as the first primary state in 1980. It wasn’t until 2008 that the Democratic National Committee chose Nevada and South Carolina to go next to provide African Americans and Hispanics a greater voice in the nomination.

According to the polling aggregates at FiveThirtyEight, the voters in Nevada and South Carolina do a better job of capturing the national sentiment about the 2020 race. If, as Martin Longman has suggested, it is coming down to a contest between Biden and Sanders, the two are basically tied in Iowa and New Hampshire. But in Nevada, Biden holds a seven point advantage. In South Carolina, his lead jumps to 24 percent. Nationally, Biden leads by ten. In other words, if it weren’t for the polling results in the first two states, no one would be talking about Sanders’s chances.

For those who are interested in the wonkiness of delegate selection, Walter Shapiro provides an interesting tidbit about another advantage that Biden holds with his strong support among African Americans.

As Biden himself might say, this calculus of primary support is getting a little wonky—but the math is important for understanding the contours of the coming nomination fight.

A candidate needs to collect at least 15 percent of the vote in a congressional district to win a delegate. An affluent suburban district might split its five votes: Warren two, Buttigieg two, and Biden one. But in a majority-minority district, Biden might be the only candidate hitting the 15 percent threshold. So, in such a scenario, he could walk off with all nine delegates.

To get an idea of where those majority-minority districts are located, here is a map of majority-black cities and towns in the U.S. 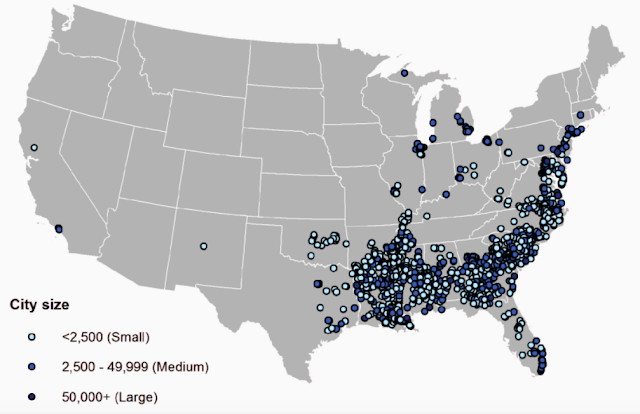 Because African Americans have traditionally been the most loyal voting block for the Democratic Party, many of those cities and towns get a disproportionate number of delegates, making those Southern states crucial for gaining the nomination. Clinton lost them to Obama in 2008, and Sanders lost them to Clinton in 2016. Nuff said.

It is still possible that the early states will surprise us with their results. That has certainly happened before. But at this point in the campaign, the advantage belongs to Biden. Unless the predominantly white states of Iowa and New Hampshire change that calculus, he will be the Democratic nominee.