After the news broke that the U.S. had assassinated Qassem Soleimani, there was a lot of chatter about what the president’s strategy was for dealing with the aftermath. Many of Trump’s critics assumed that he didn’t have one. But pretty quickly, we saw that was wrong. He does have a strategy, and it’s important to recognize what it is.

On Saturday, Trump tweeted: “If Iran strikes any Americans, or American assets, we have targeted 52 Iranian sites (representing the 52 American hostages taken by Iran many years ago), some at a very high level & important to Iran & the Iranian culture, and those targets, and Iran itself, WILL BE HIT VERY FAST AND VERY HARD. The USA wants no more threats!”

On the Sunday talk shows, Secretary of State Mike Pompeo argued that Trump never threatened to destroy Iranian culture sites, presumably because that would be a war crime. But the president reiterated the threat on Sunday night, telling reporters: “They’re allowed to torture and maim our people. They’re allowed to use roadside bombs and blow up our people. And we’re not allowed to touch their cultural site? It doesn’t work that way.”

The strategy behind those threats was captured by a State Department official during a background briefing. 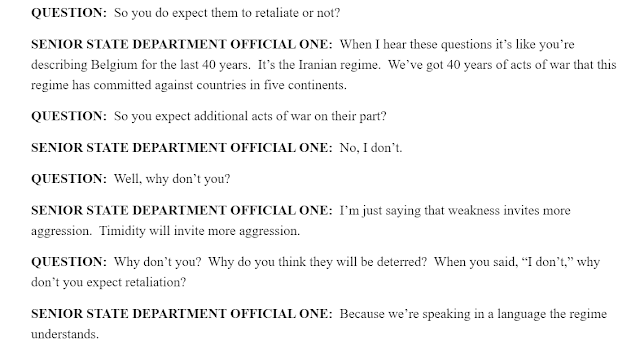 The assumption is that, by assassinating a military leader, the U.S. is “speaking in a language” that the Iranian regime understands, which will cause them to back down from retaliation. But just to be clear, it appears that Iran is making the same assumption. In response to Trump’s threat, Hossein Dehghan, the military adviser to Iran’s supreme leader, said that “the only thing that can end this period of war is for the Americans to receive a blow that is equal to the blow they have inflicted.”

Jonathan Chait points out that this is the principle that defines Trump’s foreign policy.

Trump’s plan is to collapse the moral space between America and its enemies… This is Trump’s deepest belief about foreign policy: The things that separate the United States from terrorists and dictatorships are not a source of strength, but of weakness. Our enemies are stronger and tougher, willing to do the hard things that must be done in order to win. To defeat them, we must become like them.

That explains everything from Trump’s embrace of war crimes to his fascination with dictators, who he views as strong and tough. Yet as Chait noted back in 2014, that kind of reverence for dictators and war crimes didn’t start with this president.

Three decades ago, right-wing French intellectual Jean-Francois Revel published a call to arms entitled “How Democracies Perish,” which quickly became a key text of the neoconservative movement and an ideological blueprint for the Reagan administration. Revel argued that the Soviet Union’s brutality and immunity from internal criticism gave it an inherent advantage over the democratic West—the United States and Europe were too liberal, too open, too humane, too soft to defeat the resolute men of the Iron Curtain.

“Unlike the Western leadership, which is tormented by remorse and a sense of guilt,” wrote Revel, “Soviet leaders’ consciences are perfectly clear, which allows them to use brute force with utter serenity both to preserve their power at home and to extend it abroad.”

That way of thinking about the world was not new three decades ago. It was the ravages of two World Wars that led to a rethinking of the whole premise on which our ideas about strength and power were based—and the development of what is often referred to as a new liberal world order. President Obama addressed that shift back in 2014 during a speech in Brussels after Russia invaded Ukraine.

In many ways, the history of Europe in the 20th century represented the ongoing clash of these two sets of ideas, both within nations and among nations.  The advance of industry and technology outpaced our ability to resolve our differences peacefully, and even among the most civilized of societies, on the surface we saw a descent into barbarism.

This morning at Flanders Field, I was reminded of how war between peoples sent a generation to their deaths in the trenches and gas of the First World War.  And just two decades later, extreme nationalism plunged this continent into war once again—with populations enslaved, and great cities reduced to rubble, and tens of millions slaughtered, including those lost in the Holocaust.

It is in response to this tragic history that, in the aftermath of World War II, America joined with Europe to reject the darker forces of the past and build a new architecture of peace.  Workers and engineers gave life to the Marshall Plan. Sentinels stood vigilant in a NATO Alliance that would become the strongest the world has ever known.  And across the Atlantic, we embraced a shared vision of Europe—a vision based on representative democracy, individual rights, and a belief that nations can meet the interests of their citizens through trade and open markets; a social safety net and respect for those of different faiths and backgrounds.

These are the two views of power that are at the heart of the questions we face today. One is based on dominance via threats and violence. The other one is based on shared values, democratic freedoms, and partnership.

In the current escalation between the U.S. and Iran, we essentially have two bullies who assume that their threats of violence will cause the other side to back down. That is the kind of thinking that led Mahatma Gandhi to say, “An eye for an eye leaves the whole world blind,” which is precisely what the two World Wars accomplished.

Traveling back to a 19th century world view is exactly what Vladimir Puttin was hoping for in helping to elect Donald Trump. The Steele dossier got this one exactly right.

Source C, a senior Russian financial official, said the Trump operation should be seen in terms of Putin’s desire to return to Nineteenth Century “Great Power” politics anchored upon country’s interests rather than the ideals-based international order established after World War II.

Over the years, American culture has taught a lot of people to revere the kind of chest-thumping against our adversaries—both foreign and domestic—that is at the heart of that out-dated patriarchal view of the world. What worries the rest of us is that we are about to get yet another lesson on its abject failure to do anything other than cause destruction in terms of both lives and treasure.

Many of us thought we were on the brink of choosing another way up until November 2016. As tensions mount between the U.S. and Iran, we need to be clear about why this is happening. It all comes down to the idea that power is captured through dominance expressed via threats and violence, which is basically a bully mentality.

As long as that is the strategy, we’ll never see an end to the forever wars.