The redistricting process in Texas after the 2000 census produced a captivating drama. Eleven state senators fled to New Mexico in order to deny Republicans a quorum.

The Democrats escaped from Austin, a 641-mile trip, after learning that Republican leaders were planning to force them into a vote on redrawing Congressional districts in the Republicans’ favor…

A similar redistricting impasse occurred in May in the Texas House, when at least 50 Democratic members escaped to Ardmore, Okla., 30 miles north of the Texas border, for four days, scuttling the majority’s plans. That time, the Texas Rangers gave chase, and federal domestic security officials were enlisted to track down a private plane that took some of the lawmakers to Oklahoma…

The Democrats in exile appear convinced that redistricting is being orchestrated by Republican leaders in Washington, particularly the House majority leader, Representative Tom DeLay, a Texan, as part of a plan to increase their power base so Republicans will retain a firm hold on power far into the future.

The efforts of the so-called “Texas Eleven” were ultimately unsuccessful and Republicans passed their gerrymandered map of congressional districts. The convolution, especially around urban areas and the southern part of the state, are pretty obvious. 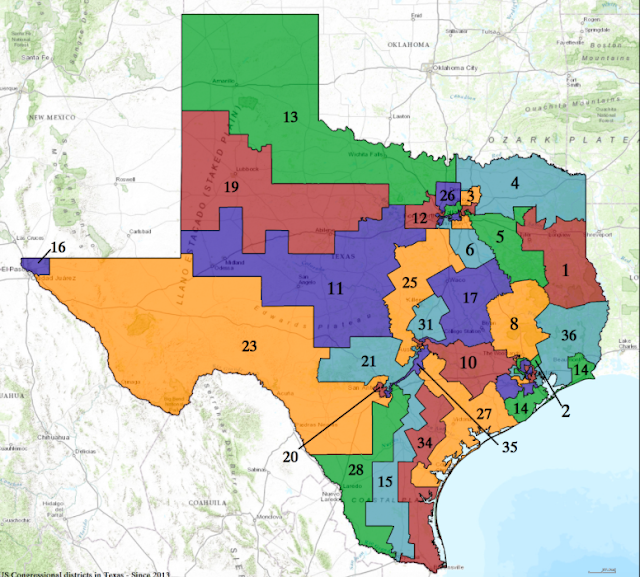 That gerrymander resulted in Republicans gaining four seats in the House of Representatives, so it was a wildly successful effort by former Representative Tom Delay and his cohorts. When we talk about the success of Republicans in gaining legislative majorities at both the state and national level, it is impossible to overstate the role that gerrymandering has played in that process.

In an effort to fight back against that happening again following the 2010 census, Eric Holder and Barack Obama have teamed up to create the organization All On the Line. Here is how Obama described their goals.

With maps that deliver on the promise of equal representation, our political leaders will be forced to actually prioritize the will and well-being of the American people on the most pressing issues of our time. Think about how different that would look than what we’ve seen recently:

* Washington politicians who’ve refused to acknowledge even the basic science of climate change—let alone the ever-growing majority of Americans demanding action to address this urgent crisis—and handed over policymaking to big oil and big polluters.

* Elected officials in the pocket of the gun lobby who’ve blocked common-sense gun laws in the midst of a uniquely American epidemic. We’re talking about measures supported by 70 percent, 80 percent, 90 percent of voters that would prevent tragedies, and they often can’t even get a vote.

* We’ve even seen Republican lawmakers in heavily-gerrymandered states like Wisconsin, Michigan, and North Carolina write legislation to strip power from Democratic governors immediately after voters turned out in big numbers to elect them.

Of course, the other method Republicans have used to maintain their power is voter suppression. On Wednesday, the DCCC and the DSCC announced that they are investing millions of dollars to fight those efforts in battleground states. For example:

The DCCC and DSCC are suing to overturn laws in North Carolina, Georgia, Texas, and Florida that have erected barriers to voting for targeted Democratic constituencies including voters of color.

* In Georgia, the committees are challenging the high rate of rejected ballots—a likely result of a lengthy, confusing ballot that scores low on readability. We have also targeted Georgia’s signature match process that currently allows election officials to throw out ballots for no lawful reason.

* In Texas, the committees are challenging the state’s effective ban on mobile polling locations by requiring them to remain open for eight hours each day and stay open for the same number of days as the main early voting location in the county.

* The committees, along with the DNC are also supporting continued litigation regarding Florida’s signature matching requirement for vote by mail and provisional voters.

Speaker Nancy Pelosi and House Democrats did their part a few months ago by passing the “For the People Act,” which included electoral reforms that would resolve these structural issues. But of course, Majority Leader Mitch McConnell refused to take up the bill in the Senate, suggesting that it was merely a Democratic power grab.

As has been pointed out occasionally during the Democratic primary, these kinds of structural reforms are necessary for any of the plans proposed by candidates to be considered. Unless and until they can be passed legislatively, it is up to efforts like these to get the job done.

In Kentucky, a new GOP-driven law denies the (Democratic) governor the ability to fill vacant Senate seats and gives it to party apparatchiks. A classic Mitch power play, it flouts the Constitution.

Mitt Romney and a group of 10 GOP senators have a plan. The White House can learn from the Harvard Negotiation Project about how to respond.

Part of me gets the need to balance risk. Part of me wants to scream.

Social science suggests that racism and geography form a toxic mix that triggers police violence. Here’s how to make it better.