During his interview on 60 Minutes last Sunday, Bernie Sanders defended his remarks from the past about Fidel Castro’s literacy program. As a result, the front-runner in the Democratic primary is coming under serious attack by a lot of Democrats, particularly those representing districts in South Florida. Pundits are probably right to suggest that comments like that ensure that Sanders would lose Florida if he becomes the nominee.

But if we approach the subject as a matter of policy rather than politics, Sanders has a point. As a reminder, when this issue came up during a debate with Hillary Clinton back in 2016, I agreed with Sanders and took issue with Clinton’s statements.

In our culture that demands that everything be cast in either/or terms, Sanders is attempting to convey some nuance about foreign leaders. He has consistently criticized the authoritarian actions of someone like Castro, while recognizing that on issues like literacy and health care, some positive things happened immediately after the Cuban revolution.

That kind of nuance is critical for effective foreign policy. It is why the Obama administration worked with adversaries like Russia and China to develop sanctions against Iran that led to the nuclear agreement. Take a look at how Obama talked about Iran during the process of negotiating that agreement.

Clearly, he [Obama] added, “part of the psychology of Iran is rooted in past experiences, the sense that their country was undermined, that the United States or the West meddled in first their democracy and then in supporting the Shah and then in supporting Iraq and Saddam during that extremely brutal war. So part of what I’ve told my team is we have to distinguish between the ideologically driven, offensive Iran and the defensive Iran that feels vulnerable and sometimes may be reacting because they perceive that as the only way that they can avoid repeats of the past.

When it came to Cuba and the Castros, Obama said basically the same thing that Bernie did.

The latest attempt by the media to smear Bernie Sanders is stating that Bernie "praised" Fidel Castro.

NO. What Bernie did is point out to us that despite how bad Cuba was, there were positive elements that we could learn from. Just like Barack Obama pointed out in this video: pic.twitter.com/C7iEhd9wdW

But more importantly, Sanders has taken America to task for our actions in Latin America during the Cold War.

Throughout the history of our relationship with Latin America we’ve operated under the so-called Monroe Doctrine, and that said the United States had the right do anything that they wanted to do in Latin America. So I actually went to Nicaragua and I very shortly opposed the Reagan administration’s efforts to overthrow that government. And I strongly opposed earlier Henry Kissinger and the—to overthrow the government of Salvador Allende in Chile.

On that issue, Sanders is right and Democrats should be wary of backing themselves into a position of defending this country’s actions in Latin America during the Cold War.

During a CNN town hall on Monday night, the issue of Sanders’ remarks about Castro came up again.

Once again, it is probably not politically expedient, but Sanders is right: truth is truth, regardless of Castro’s authoritarianism. The problem, of course, is that too many Americans can’t handle that level of nuance.

But what struck me were Sanders’ remarks about China—which are much more current than arguments about what happened during the Cold War.

China is another example. China is an authoritarian country, becoming more and more authoritarian. But can anyone deny—I mean, the facts are clear, that they have taken more people out of extreme poverty than any country in history.

Sanders is right about China’s record on reducing extreme poverty. Here is a chart from the World Economic Forum demonstrating that dramatic change. 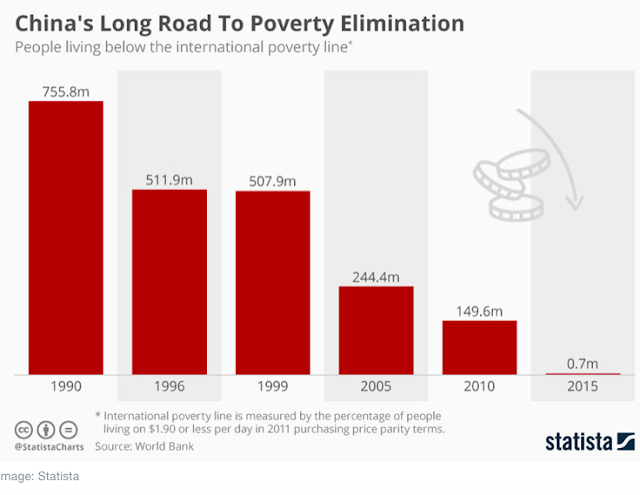 One has to wonder what Sanders would say in response to a question about how that happened. Zheping Huang and Tripti Lahiri point to the fact that “in 1978, China’s leader Deng Xiaoping kicked off the ‘reform and opening-up’ campaign.” It included moving to a more “market-based” economy and investing in a massive infrastructure campaign that would open up the possibility of foreign investment just as the era of globalization was getting underway.

By 2000, the United States provided permanent normal trade relations to China as a precursor to them joining the World Trade Organization—both moves that contributed to the reduction of poverty in China, but were opposed by Sanders. He recently affirmed that opposition.

Since the China trade deal I voted against, America has lost over 3 million manufacturing jobs.

It’s wrong to pretend that China isn’t one of our major economic competitors.

When we are in the White House we will win that competition by fixing our trade policies.

At this point, trade hasn’t been a major focus in the 2020 election the way it was in 2016. But Sanders might want to think twice about bringing up the huge gains that have been made in reducing global poverty over the last couple of decades because they point in the opposite direction of his platform on trade.