Not only does the United States have the highest maternal mortality rate in the developed world, the statistics are getting worse, not better. 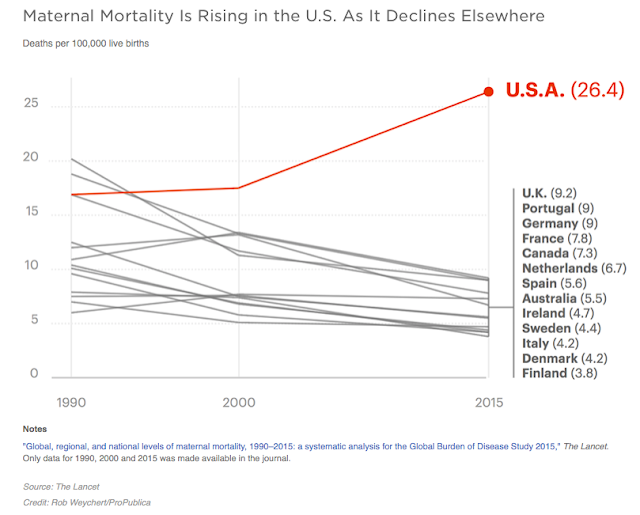 As Senator Kamala Harris has pointed out, the numbers are even worse for African American women, who are three times as likely to die from pregnancy-related complications compared to their white counterparts.

While the roots of a problem like this are complex, one of the contributors comes in the form of what Christian nationalists refer to as “religious liberty.”

The first thing to know about the connection is that one in six hospital beds in the United States is now in a Catholic-run medical facility, with that number exceeding 40 percent in some states. All of those facilities operate under something called Ethical and Religious Directives (ERDs), which are based on Catholic teachings.

The ERDs impose limitations on the types of services and procedures they are able to deliver. Based closely on Vatican teachings and codified by the United States Conference of Catholic Bishops, these directives are thus the work of clergymen, not doctors. Employees of Catholic-affiliated hospitals and health care facilities must typically follow the guidelines as a condition of their employment.

Those ERDs prohibit staff at Catholic hospitals from performing abortions—even when a woman is having complications due to a miscarriage. Here is an example Katherine Stewart included in her book titled, The Power Worshippers.

In an ACLU study (for which I served as an investigator), “Health Care Denied: Patients and Physicians Speak Out About Catholic Hospitals and the Threat to Women’s Health and Lives,” an Illinois doctor named David Eisenberg recalled that the sickest patient he ever cared for during his residency was a young woman experiencing a miscarriage. The patient had initially sought care at another hospital, which happened to be Catholic. Although her waters had broken, the hospital denied the necessary steps to hasten the safe completion of the miscarriage. Ten days later, the young woman transferred hospitals and came under Dr. Eisenberg’s care.

By that point, Eisenberg says, she had a fever of 106 degrees and was “dying of sepsis.” She survived, Eisenberg says, but suffered a cognitive impairment, as well as an acute kidney injury so severe that she required dialysis. The woman spent nearly two weeks in the hospital, after which she was transferred to a long-term care facility.

As Stewart points out, we don’t have any way of knowing how often something like that happens or how dire the results are because no one tracks these incidents and women are obviously hesitant to come forward. Stewart bravely tells her own story of how this very thing threatened her own life during a pregnancy.

In the last days of December 2003, I was thirteen weeks pregnant and filled with joy at the prospect of having a second child. Then, one afternoon, I began to bleed heavily and soon became faint. Leaving my toddler at home with my husband, I was loaded on to a stretcher and taken by ambulance to the nearest hospital, as ambulance drivers are often required by law to do. We were living in downtown Manhattan at the time, and so the ambulance took me to St. Vincent’s Hospital, a Catholic facility in the West Village that has since been shuttered.

By the time I arrived, my blood pressure was dangerously low. I felt I was passing in and out of consciousness. I know now that what I needed then was dilation and curettage, a D&C, the procedure that removes tissue from the uterus. I needed it immediately to staunch the bleeding, but hours passed and I was left to hemorrhage alone.

At some point, I started shaking; I was going into shock. I learned later that I lost nearly 40 percent of my blood. Only then did the hospital provide me with the abortion that saved my life…

I later inquired with the medical provider in order to review their records of the episode. I was able to confirm the amount of time that elapsed and the total loss of blood I had suffered, but I found no explanation for the delay in treatment. But given what I have since learned about the Ethical and Religious Directives under which St. Vincent’s would have been acting, I believe the hospital was willing to gamble with my life for the sake of preserving an imaginary child.

In the January/February 2016 issue of the Washington Monthly, Kathleen J. Frydl told a similar story about what happened to a woman named Tamesha Means. Frydl did so as part of an article that traced the origins of what we call the “conscience clause” that allowed Catholic hospitals to work in the public domain, even under these restrictive ERDs.

As Stewart points out, however, the Trump administration is attempting to nationalize the concept behind ERDs.

In January 2018, the Trump administration established the Conscience and Religious Freedom Division in the Office for Civil Rights at the US Department of Health and Human Services…The actual mission of the office is not to protect patients but providers. Its goal is not to ensure that patients get care but that providers may deprive them of it when it suits those providers’ religious beliefs…

Then, on May 2, 2019, after declaring a National Day of Prayer, President Trump proudly broadened the unit’s mandate to cover essentially all health services and staff that receive federal funds. Announcing a new rule, known as Protecting Statutory Conscience Rights in Health Care, the Trump administration signaled that all health care industry personnel, from physicians and nursing staff to receptionists, ambulance drivers, ultrasound technicians, and schedulers would be permitted to refuse to serve or treat patients if doing so offends their personal “religious beliefs or moral convictions.”

Such a “liberty,” like the liberty of a medical institution to allow a woman to become septic to the point of cognitive injury, is really just a form of religious privilege.

It is time to disabuse ourselves of the idea that “religious liberty” is merely a conflict about whether or not bakers are required to make cakes for gay weddings. When it comes to healthcare—especially for women—lives are at stake.

Left-leaning thinkers have been inveighing against the problems of globalized...

The Justices are distracting the public with narrow opinions that leave no side satisfied, just like those old Magic 8 balls. Soon, they’re going to have to make a decision.

Public option proponents face huge political hurdles; there is another way to achieve many of the same goals.