He’s counting on winning Iowa and New Hampshire, where he was already surprisingly strong in 2016, and hoping that Cory Booker and Kamala Harris will split the black electorate in South Carolina and give him a path to slip through there, too. And then, Sanders aides believe, he’ll easily win enough delegates to put him into contention at the convention. They say they don’t need him to get more than 30 percent to make that happen.

Of course, that began to break down when Buttigieg challenged Sanders in both Iowa and New Hampshire. By the time the race got to South Carolina, Booker and Harris were out, but African American voters helped Biden sweep the state. As we saw on Super Tuesday, however, Sanders continues to hold on to the 30 percent his campaign hoped would get him enough delegates heading into the convention.

The question that remains is whether that will be enough. As David Atkins pointed out, Biden’s performance on Tuesday demonstrates the makings of a winning coalition that will challenge the strategy adopted by the Sanders campaign. Let’s take a look at how he did that.

With all that’s happened since Biden first entered the race, some people seem to have forgotten that the initial take on him was that he was the guy from Scranton that could win with working class voters. According to the poll aggregates assembled by the Economist, Biden continues to garner the support of non college-educated voters. 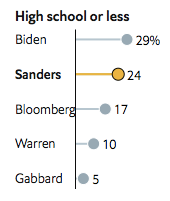 The reason a lot of people forgot about Biden’s strength among working-class voters is because, from the moment he announced his presidential campaign, he has had overwhelming support from African Americans—especially in the South. We’ve already talked a lot about why that is happening. But as someone on Twitter recently put it, African Americans know that Biden has evolved in a way that is “dear to our hearts.” It isn’t just that he served as Barack Obama’s vice president. In a way that is uncommon for older white men, he did so by being second-in-command to a black man and never trying to undermine him in the process. That, and speeches like this earned Biden the loyalty of African American voters.

We are at an inflection point. We can choose four more years of Donald Trump's poisonous rhetoric and divisive politics — or we can take the next great step forward as a nation.

It won’t be easy. But we can do it, together. pic.twitter.com/pR7zzOqyzI

Heading into the 2016 election, all of the chatter was about how angry voters were. Initially it was assumed that the anger was fueled by economic anxiety. But over time, it became clear that a better word to describe what happened is grievance—especially the kind felt by the nostalgia voters who supported Donald Trump.

The president and his enablers will once again court that sense of grievance in the 2020 election, while candidates like Sanders and Warren have been attempting to tap into the economic anxiety that Americans feel. But all of that might be a miscalculation.

After four years of Donald Trump, 2020 will not be a repeat of 2016. Beyond the issues that are of primary concern to some voters, it is becoming clear that an awful lot of people are tired of the anger and division. Along those lines, Washington Monthly writer Julie Zebrak confirmed why suburban women turned out in force for Joe Biden on Super Tuesday.

Suburban women (like me) want safety, calm, security, trustworthiness, and honesty right now. We want a woman, but more than anything we want Trump out. We trust @JoeBiden to do that and we damn well don’t want a revolution. https://t.co/41N1ybWLUl

Women are tired of a politics that is all about identifying an enemy and going on the attack. They’re even more tired of the effect Donald Trump’s bullying is having on their children—not to mention the cruelty of policies like locking little ones up in cages.

That is something else that Joe Biden tapped into. While a lot of people credit the endorsement of Rep. Clyburn for Biden’s sweep in South Carolina, this video captured a significant moment just two days before the primary.

Cynical political pundits might be dismissive of that moment, but keep in mind that during the remainder of that town hall discussion, two people who rose to ask questions indicated that Biden had won their support that night. What that tells us is that voters are tired of cruelty and are hungry for empathy. That hunger isn’t restricted to suburban moms. A lot of people are ready to restore some humanity to the White House. Those folks are a big part of the coalition Biden is building.

The group where Biden’s coalition demonstrated weakness on Super Tuesday was with young people. As Martin Longman has already noted, they are not turning out to vote so far in the primaries, perhaps demonstrating that, while the revolution Sanders is proposing appeals to some of them, it isn’t necessarily what the majority of young people are looking for. What would galvanize them to get out and vote is definitely an issue that still needs to be addressed.

Given the fact that Bloomberg has now dropped out of the race, the Sanders strategy of getting to the convention with 30 percent support is increasingly looking like a miscalculation. As has always been the case in Democratic politics, building a coalition is always a better bet.