On Tuesday, Trump told reporters that his message on the coronavirus was, “It will go away, just stay calm.” He added, “Be calm. It’s really working out. And a lot of good things are going to happen.”

That is pretty consistent with what we’ve been hearing from the president and his administration all along. The folks at Daily Kos put together a chart demonstrating how their words have been at odds with reality. 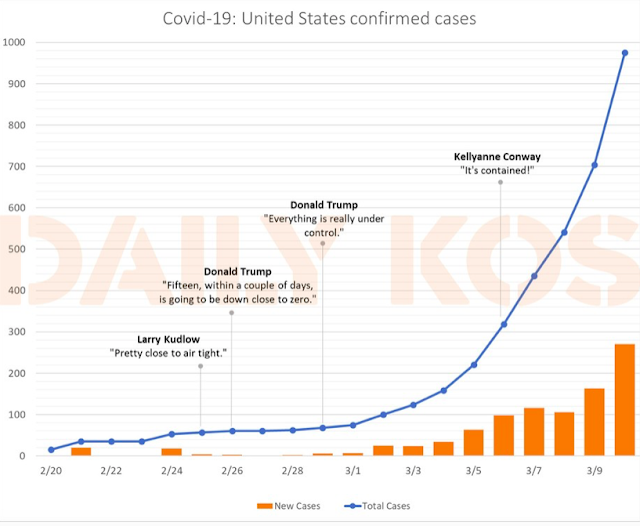 As Mark Sumner noted, that chart was already outdated by the time it was created on Tuesday evening.

On Wednesday morning, it’s already at 1,015 … and that will only stand up for a matter of minutes. It’s not possible to make an accurate chart of something that’s moving as fast as the number of confirmed cases of COVID-19 within the United States.

Experts have suggested that the United States is on the same trajectory that we’ve witnessed in Italy.

In a matter of three days, the coronavirus death toll in #Italy has gone from 366 to 827.

We’ve known for a while now that Trump isn’t interested in things like science and math. So he’s probably ignorant of something called a geometric sequence and how that relates to a pandemic.

Perhaps that is something you’re not familiar with either. But what if I were to ask you whether you’d prefer to be given $1 million right away, or one penny the first day, double that penny the next day, and then double the previous day’s pennies and so on for a month? If you chose the $1 million up front, you’d have shorted yourself well over $4 million.

You start with a penny the first day and keep doubling each day. Doubling means that we keep multiplying by 2 each day for one month (30 days).

On the first day, you get 1 penny

On the second day, you get 2 pennies

On the third day, you get 4 pennies… Do you see the pattern yet?

On the fourth day, you get 8 pennies…

One of the more common ways of talking about this kind of exponential growth is to use an old legend about the rice and the chessboard, which is believed to have originated in India.

“A wise old ruler wanted to reward his servant for an act of extraordinary bravery. The servant said:

‘Master I ask you for just one thing. Take your chessboard and place on the first square one grain of rice. On the first day I will take this grain home to feed my family. On the second day place on the second square 2 grains for me to take home. On the third day cover the third square with four grains for me to take. Each day double the number of grains you give me until you have placed rice on every square of the chessboard. Then my reward will be complete.’

‘This sounds like a small price to pay for your act of incredible bravery, I will ask my servants to do as you ask immediately.’

Given that there are 64 squares on a chessboard, it is unlikely that the wise old ruler made it that far.

On day 54, the servant is due to have collected a total of 5.22 x 1011 kg of rice, exceeding modern day annual worldwide rice production. In ancient times rice production was much less, meaning that the wise ruler had been outwitted by the servant long before this point.

Of course, someone tried to visualize that one on Youtube.

With that, we’re all a lot smarter about the math involved in a pandemic, but perhaps even more terrified. But this is why it is so important to flatten the curve when it comes to the spread of the coronavirus. As I mentioned previously, that might not result if fewer cases, but what it will do is spread them out over a longer period of time, ensuring that our health care system is not completely overwhelmed.