One of the critiques that is often leveled at the NeverTrumpers is that, even as they reject the current president’s words and deeds, they fail to assume any responsibility for how we got here. That isn’t true of Stuart Stevens, who once served as Mitt Romney’s campaign strategist. He has written a courageous piece titled, “Republicans like me built this moment. Then we looked the other way.”

The failures of the government’s response to the coronavirus crisis can be traced directly to some of the toxic fantasies now dear to the Republican Party. Here are a few: Government is bad. Establishment experts are overrated or just plain wrong. Science is suspect. And we can go it alone, the world be damned.

As the country deals with the fallout of this administration’s failure to respond to a pandemic, it is important to remember that it didn’t all start with Donald Trump.

During his 1981 inaugural address, the patron saint of the Republican Party—Ronald Reagan—famously said that “Government is not the solution to our problem, government is the problem.” He was articulating a foundational principle of the modern-day GOP, which sees government as the enemy of free-market capitalism.

Leading up to Reagan’s election, Republicans used the so-called “Southern Strategy” to win over support from the majority of white Americans for their efforts to dismantle the federal government. Harkening back to the Civil War, they did so under the banner of “state rights,” and by claiming that federal government initiatives were designed to help “those people.”

During the Reagan era, a strategy to “starve the beast” was incorporated, which promoted tax cuts as a way to reduce federal revenue. One of the main proponents of that strategy was Grover Norquist, who famously said, “I don’t want to abolish government. I simply want to reduce it to the size where I can drag it into the bathroom and drown it in the bathtub.”

Fast forward to 2016 and we have Donald Trump running for president on a promise to “drain the swamp.” As we now know, that wasn’t an allusion to ending corruption. While serving as White House chief strategist, Steve Bannon explained that the goal was “the deconstruction of the administrative state.” Through a combination of incompetence and malevolence, they have been wildly successful in those efforts.

Because most of the programs and regulations administered by the federal government are supported by the majority of Americans, advocating for their dissolution has always required subterfuge. That is why one of the fallbacks has always been to employ racism. But when it came time to “starve the beast,” Republicans invented the lie of “trickle-down economics,” suggesting that tax breaks to the wealthy would somehow trickle down to the rest of us.

All of that meant that, as David Roberts wrote, Republicans became the post-truth party.

In short, Republicans have mastered post-truth politics. They’ve realized that their rhetoric doesn’t have to bear any connection to their policy agenda. They can go through different slogans, different rationales, different fights, depending on the political landscape of the moment. They need not feel bound by previous slogans, rationales, or fights. They’ve realized that policy is policy and politics is politics and they can push for the former while waging the latter battle on its own terms. The two have become entirely unmoored.

In order to sell those lies, Republicans had to reject things like facts, science, and math. Experts on those matters were labeled “elitists” (most often relegated to liberal coastal states) who were attempting to silence the “heartland.” That became a rallying cry of the so-called “populists” during the 2016 election. This cartoon captures what it means to reject elitists who happen to be the experts. 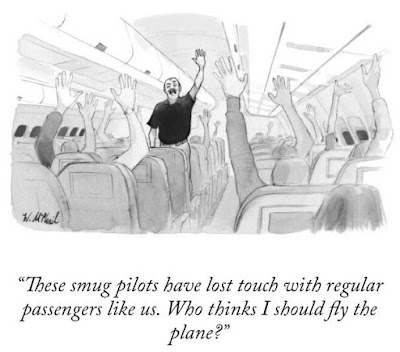 That attitude helps explain how we wound up with a man in the White House whose major claim to fame had previously been to star in a reality television series.

As the saying goes, I’m old enough to remember that Republicans howled when, during a 2004 debate, John Kerry suggested that a president’s decision to go to war should pass a global test of legitimacy. Four years later, they accused President Obama of leading from behind when he attempted to partner with our allies. Those were the harbingers to Trump’s isolationism captured by his “America First” mentality.

A Republican president is now presiding over the federal government’s response to a pandemic. He is doing so with a bureaucracy that has been decimated, while he lies, rejects the advice of experts, and assumes that a virus can be stopped by building walls. Stevens sums it up by writing, “What is happening now is the inevitable result of a party that embraced fear, weaponized xenophobia, and regarded facts as dangerous, left-wing landmines that must be avoided.”

Of course, the first order of business for all of us is to get through this pandemic as best we can. But we should never forget that it wasn’t just Trump that failed in his response. He is heir to decades of Republican principles that paved the way for needless suffering on a massive scale.