This is one of my favorite Thanksgiving memes. 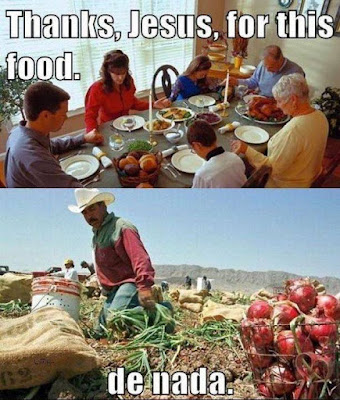 It is a reminder of some of the people who deserve our gratitude for the food we eat—not only on Thanksgiving—but every day of the year.

What we don’t like to talk about is the fact that somewhere between 50-75 percent of the workers who grow, harvest, and process the food we eat are undocumented. Especially under the Trump administration, they do their work while living in fear of being deported.

But during this coronavirus crisis, these farmworkers are living with a peculiar irony: they are now considered both illegal and essential. Based on guidelines distributed by the Department of Homeland security, they have been included on the list of “essential workers” who “have a special responsibility to maintain [a] normal work schedule.” As a result, many employers have provided farmworkers with letters identifying them as “essential” in order to protect them while traveling to and from the workplace. Those letters do not, however, protect them from deportation.

Letters notifying undocumented workers that they are “essential,” when they still officially face potential deportation, are sending the same mixed signals that have long been at the root of American agricultural labor policy, according to many who work closely with the process.

“Some people are really confused by the message,” said Reyna Lopez, executive director of P.C.U.N., a union representing agricultural workers in Woodburn, Ore. “The government is telling them it needs them to go to work, but it hasn’t halted deportations.”

Beyond the irony of those mixed signals, many of these undocumented workers are at high risk for contracting coronavirus—especially those in processing plants where they work in close quarters. Without sick days or health insurance, that doesn’t simply pose a danger to them, but to those of us who consume these products as well.

The bottom line is that, during this crisis, the federal government has finally stated publicly that these workers are essential. Anyone with half a brain already knew that, but now it’s there in black and white in a DHS document. If we want to eat, we need these workers to grow, harvest, and process the foods we consume on a daily basis—whether we’re dealing with a pandemic or not.

What is unconscionable is to be aware of that while forcing these workers to live in the shadows and resist any attempt to provide them with a pathway to citizenship.