Tara Reade, who worked in Joe Biden’s Senate office in the early 1990s, has alleged that the former vice president sexually assaulted her. Her claims are disturbing, but not in the way that Rebecca Traister has suggested. While Triaster refers to the “alleged” assault throughout her piece, she writes under the assumption that what Reade claims is true. In that way, she affirms the kind of “zero tolerance” for accusations that became rampant when similar charges were launched against then-Senator Al Franken.

Having had experience with someone who made false claims of sexual harassment, I have always maintained that women should be taken seriously when they make such allegations. That means following up by conducting an investigation. As in most cases of sexual assault, there were no witnesses to what Reade claims happened between her and Biden, which means that it will be difficult to prove one way or another.

Since Reade told her story to Katie Halper, some additional evidence has surfaced. First came this report from Ryan Grim.

In interviews with The Intercept, Reade also mentioned that her mother had made a phone call to “Larry King Live” on CNN, during which she made reference to her daughter’s experience on Capitol Hill. Reade told The Intercept that her mother called in asking for advice after Reade, then in her 20s, left Biden’s office. “I remember it being an anonymous call and her saying my daughter was sexually harassed and retaliated against and fired, where can she go for help? I was mortified,” Reade told me.

Video👇🏻@ReadeAlexandra — is this your Mom’s voice? https://t.co/ospBhlKSvb pic.twitter.com/r5WsXJ2vQb

That is an important piece of evidence. But the caller didn’t identify themselves, their daughter, the senator in question, or the specific allegations.

After choosing to remain anonymous to other reporters, two of Reade’s friends confirmed to Rich McHugh that she had told them about the assault at the time.

“This happened, and I know it did because I remember talking about it,” Lynda LaCasse, who lived next door to Reade in the mid-’90s, told Insider.

The other source, Lorraine Sanchez, who worked with Reade in the office of a California state senator in the mid-’90s, told Insider that she recalls Reade complaining at the time that her former boss in Washington, DC, had sexually harassed her, and that she had been fired after raising concerns.

But as Joan Walsh reports, there are a lot of inconsistencies in these stories.

Reade now says she made claims of sexual harassment, but not assault, to her supervisors in Biden’s office; they vehemently deny hearing any such complaint. She says she was told to find a new job by a supervisor, but she has also changed her recollection of which supervisor it was when speaking to reporters in recent weeks (all of the people she named deny it). The AP contacted 21 former Biden staffers, none of whom remember any Reade complaint against their boss. Reade also claims she complained to the Senate personnel office; there is no record of it…

Just last Thursday, Reade filed a complaint with the Washington, DC, police department, but told the Post she did so, in its reporters’ words, “because she is being harassed online and wanted law enforcement to be aware of her claim.” The public record of the claim doesn’t name Biden but says Reade “disclosed that she was the victim of a sexual assault” in 1993.

In his closely documented, almost 50-year career, there have been no other similar claims against Biden. The Times interviewed the other seven women who came out last year to accuse Biden of touching them against their will; none said his behavior crossed the line to sexual assault. After many dozen interviews, with Reade and her friends, along with lawyers and two dozen Biden staffers, the writers concluded: “The Times found no pattern of sexual misconduct by Mr. Biden.” Men who do what Reade says Biden did tend to do it more than once (see Harvey Weinstein, Jeffrey Epstein, and Donald Trump). Also, once an allegation like Reade’s surfaces, others usually follow. They have not, at least so far.

For reasonable people, none of this paints a clear picture of whether these allegations are true. That leaves us with two very uncomfortable conclusions as possibilities. The first is that the man who is the presumptive Democratic nominee for president is guilty of sexually assaulting a woman more than 25 years ago. The other is that Tara Reade is lying. What is even more disturbing is that we have precious little information to help us decide between those two conclusions.

For many feminists, the possibility that a woman would lie about sexual assault is anathema. But are we really willing to dispense with that possibility in these days of disinformation? Automatically believing any woman is an open invitation to that kind of thing. That is exactly where Reade’s past provides a counterweight to the recent evidence that has surfaced.

First of all, it is important to know that Tara Reade has gone by several different names in the past, including Tara Reade Moulton, Tara McCabe, Alexandra Tara McCabe, and Alexandra Tara Reade. In 2016 and 2017, she had a twitter account under the name Tara McCabe, where she retweeted praise for Joe Biden’s efforts to end sexual assault, as well as condemnation of Vladimir Putin. 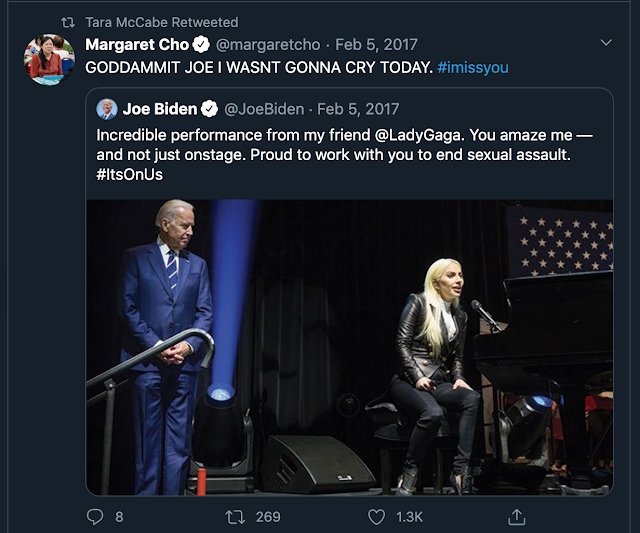 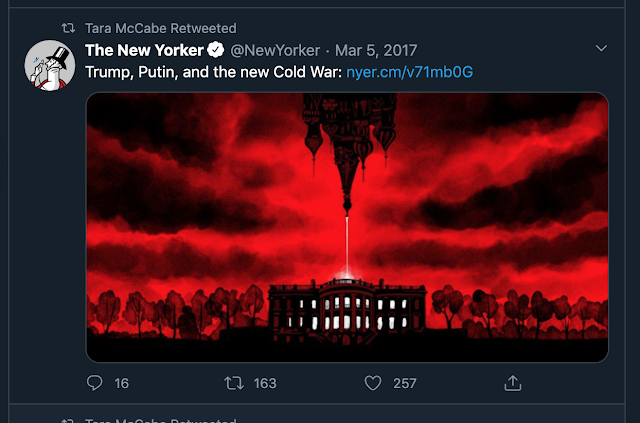 The piece Reade retweeted from the New Yorker outlines Putin’s new cold war against America and how he is trying to “damage American confidence and undermine the Western alliances — diplomatic, financial, and military, that have shaped postwar world.”

Then, all of the sudden in 2018, writing under the name Alexandra Tara Reade, she began praising Vladimir Putin, sometimes in fairly sexual terms. Here is what she wrote in November 2018 in an article titled “Why a Liberal Democrat supports Vladimir Putin.”

Through my lens, President Putin brought a chaotic and failed nation to become a vibrant, creative, economic force within a decade. I don’t care what your politics; just admit that his sheer, calculated vision and willful energy brought Russia back to be a world power…President Putin has an alluring combination of strength with gentleness. His sensuous image projects his love for life, the embodiment of grace while facing adversity. It is evident that he loves his country, his people and his job. Although his job may seem like in the words of writer, Elizabeth Gilbert on genius, “ trying to swallow the sun.” This is a whole lot to deal with for one mere mortal… President Putin’s obvious reverence for women, children and animals, and his ability with sports is intoxicating to American women.

The week she came forward with her allegations against Biden, Reade wrote this.

When the anti-Russia, anti-Putin propaganda starts up, personally, I shut down. I love Russia, I love my Russian relatives and friends. And like most women across the world, I like President Putin… a lot, his shirt on or shirt off.

All of those missives to Putin that Reade wrote have now been deleted (links go to where they’ve been archived), so she obviously doesn’t want that to be part of the story. But they certainly raise some questions about a possible disinformation campaign against Biden.

While I won’t attempt to analyze Reade, it is clear that she is an avid storyteller—which is what she claims is behind her missives about Putin. She also shows signs of being the victim of sexual assault/abuse, perhaps even during her time in Washington, DC. Finally, something dramatic changed for her between 2017 and 2018—although what that would entail is a complete mystery.

Taking such a deep dive into Reade’s past makes me uncomfortable. It reeks of blaming the victim. But she has made serious allegations that paint an equally uncomfortable picture of a presidential candidate. There is no getting around that if we honestly want to search for the truth.

On the one hand, we have a man with a history of touching women in ways that made them uncomfortable but has faced no other accusations of sexual assault. Back in 2008, Biden went through a thorough vetting by the Obama campaign and either they found nothing, or did and ignored it. I find the latter option to be implausible.

On the other hand, we have a woman whose allegations of experiencing some form of sexual misconduct back in 1993 have been corroborated by friends and family—although not by any co-workers. Her story is replete with inconsistencies and her recent history points to the possibility that her claims could part of a disinformation campaign.

The agenda I bring to the table is that I want to believe Joe Biden. Frankly, though, I struggle with that and have tried to weigh all of the evidence. That is what is disturbing about this whole thing…we just don’t know. And I’m afraid we’re all going to have to live with that.

Over the last decade, if you wanted to know where...