Over the last decade, the Republican Party has been bleeding support from younger voters, even though they don’t tend to turn out in large numbers. To demonstrate, here is what the electoral map would have looked like in 2016 if people aged 18-34 were the only voters. 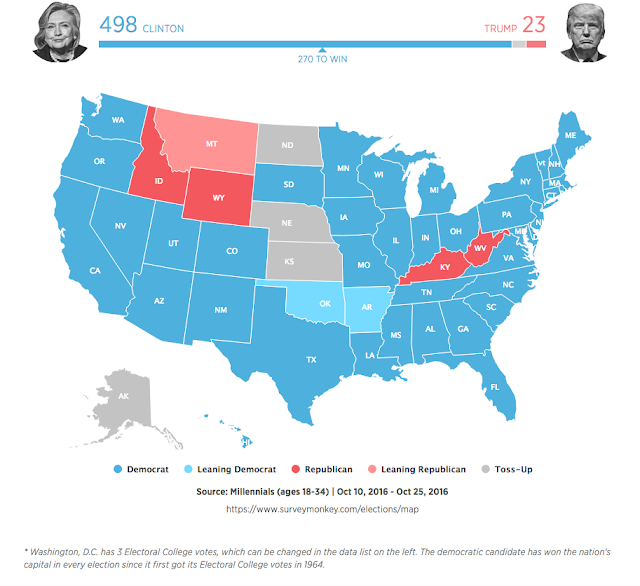 We can talk about how the issues affected those results, but I am reminded of the kind of contempt for young people someone like Johah Goldberg demonstrated during this conversation that took place in 2012.

I suspect that when Golberg said that young people are “so frickin’ stupid,” he was voicing the kind of attitude that often goes unspoken by conservatives, but communicated nonetheless. That is a particular kind of ageism.

Frankly, Republicans have never made much of an attempt to win over young voters. Instead, the GOP has almost always relied on support from older Americans. As Ron Brownstein noted, “Democrats have lost seniors in every presidential race since 2004 by at least 5 percentage points.” But heading into 2020, that seems to be changing.

[S]everal recent national polls, such as the latest from CNN, Quinnipiac University and NBC/Wall Street Journal, have shown the 77-year-old Biden leading Trump among voters 65 and older; those surveys have also shown Biden running competitively among voters aged 50-64, who have also been a very difficult group for Democrats.

While that shift actually began during the 2018 midterm elections, it is hard to ignore the possibility that the way this administration has handled the coronavirus crisis is having an impact.

The problematic numbers for Trump come as his handling of the coronavirus crisis has faced withering criticism and low marks from voters, many of whom have told pollsters they do not trust the president to provide accurate information about the pandemic. As Trump pines for the economy to be reopened, most Americans say they fear restarting economic activity too soon, according to a Wall Street Journal/NBC News poll released Sunday. A resurgence of coronavirus cases would be especially devastating for seniors.

“They’ve been scared to death,” said LeaMond, adding that health care is likely to be a top issue for older voters in 2020 just as it was in 2018.

We’ve also watched as Republican politicians and conservative commentators suggest that we need to re-open the economy, even if it means that more senior citizens will die. I was particularly struck by this clip of Ben Shapiro pontificating on the lives of the elderly.

Ben Shapiro: "If somebody who is 81 dies of COVID-19, that is not the same thing as somebody who is 30 dying of COVID-19…If grandma dies in a nursing home at age 81, that's tragic and it's terrible, also the life expectancy in the United States is 80" pic.twitter.com/L2UJi95OUN

Before we get to Shapiro’s comments about 80 year-olds, I’d just like to note that, at one point, he said that if five-year-olds were dying, everyone would agree to a lock-down forever. But in 2012, 26 six and seven-year-olds were gunned down at their school in Newtown, Connecticut and all we got from conservatives was “thoughts and prayers.” So I doubt that someone like Shapiro would be any more concerned if they were falling victim to a pandemic.

Not only does Shapiro insinuate that the lives of 80 year-olds are of less value, his assumption is that they are all grandmas living in nursing homes. As a way to puncture that stereotype, I’ll go out on a limb and suggest that Shaprio probably hasn’t watched one of the hottest series on Netflix.

Those aren’t just younger actors playing the roles of elderly women. Lily Tomlin is 80 years old and Jane Fonda is 82. For those of us entering our “golden years,” they are a vision of hope for what life could be like in the years ahead. Is it any wonder that when Republicans tell us our lives are expendable, we find that terribly insulting?