Almost three and a half years into Trump’s presidency, it has become almost blasé to talk about his ubiquitous lies. According to the fact-checkers at the Washington Post, as of April 3rd, he has told 18,000 in 1,170 days, for an average of more than 15 per day. What is even more disturbing: He’s getting worse. 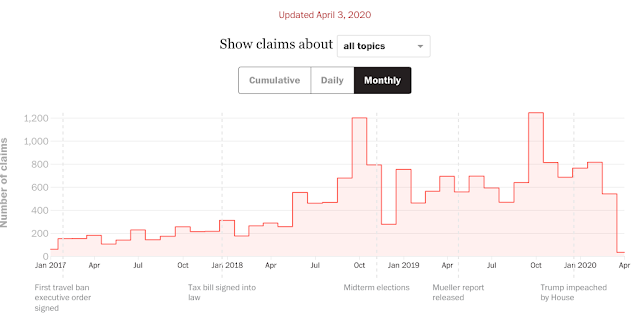 It isn’t hard to see how the president gets to more than 15 lies per day when you look at this clip from the Oval Office last week.

1. “We started off with empty cupboards (referring to the Strategic National Stockpile). The last administration left us nothing.” Fact check:

Most of the materials in the stockpile are stored in large warehouses around the country, and where those warehouses are located, and exactly what’s in them, is not publicly disclosed.

But NPR science correspondent Nell Greenfieldboyce was allowed to visit one facility in June 2016 — only months before Trump was inaugurated in January 2017. In her article about the warehouse she toured, she described the shelves as being the opposite of bare.

“A big American flag hangs from the ceiling, and shelves packed with stuff stand so tall that looking up makes me dizzy,” Greenfieldboyce wrote.

The novel coronavirus that causes Covid-19 didn’t even exist until late 2019, and didn’t arrive in the US until January. So barring some sort of time travel, it was not possible for Obama to develop a test for a virus that didn’t exist until nearly three years after he left office.

3. “H1N1, the swine flu, the Obama administration was a disaster.” Fact check:

4. “They did polling on how did they do (ie, the Obama administration on H1N1) and their polls were so negative, so bad. They did a very poor job. Fact Check:

The averages of two polls in 2009 showed that 67% of respondents were very confident or somewhat confident in the federal government’s ability to handle the H1N1 outbreak.

5. “They did a poor job on ammunition. When I got here we had no ammunition.” Fact check:

After targeting Islamic State operatives with tens of thousands of smart bombs and guided missiles, U.S. military officials began to say publicly that stockpiles were growing thin…Trump never limits his comments to PGMs [precision guided missiles] and instead gives the impression that all ammunition was running out…

Moreover, Trump’s claim has morphed from “very little” ammunition to “no ammunition.” No military official has claimed that munitions, whether PGMs or for any other kind of weapon, were depleted. Finally, we note that Carter’s comments from 2016 indicate that U.S. officials were working on rebuilding PGM stockpiles before Trump took office.

That last one has been repeated so many times that the Washington Post fact-checkers now include it in their list of “Bottomless Pinocchios,” or lies Trump has told more than 20 times. The other four are likely to get there soon since he repeats them regularly.

If you had any trouble getting through all of that fact-checking, it is because the whole process gets boring after a while. So the country has been divided into those who believe the lies and those who respond by saying “Yeah, Trump lies. Tell me something I don’t know.” Occasionally, we hear something along the lines of “All politicians lie.”

I would maintain that Trump’s lies are different. They are not only ubiquitous, but they are also outlandishly false. Their motive is always to prop up the president’s ego by attacking others and shifting blame. Finally, they point to someone who is growing increasingly disconnected from reality. To become blasé about all of that is to cease to be shocked by the fact that the President of the United States is mentally unfit for office, leading to a normalization of what’s happening.

Over the weekend, George W. Bush released a video that seems to be part of a broader effort to rehabilitate his image. Even some liberals found it to be a breath of fresh air, given our current circumstances. All I could think of in reaction was that it came from a president whose administration lied us into a war in the Middle East—sacrificing the lives of thousands.

Personally, I’m not interested in the rehabilitation of George W. Bush. His list of betrayals on everything from the Iraq War to the use of torture and his utter failure in response to Katrina should never be forgotten. And yet somehow, folks are willing to give him a pass in comparison to the current occupant of the Oval Office. Giving Bush a pass leaves the door wide open to do the same thing with Trump in the future. We can never let that happen.

Over the last decade, if you wanted to know where...