Former George W. Bush speechwriter Peter Wehner did an excellent job of capturing what the 2020 presidential election will be about when he wrote that it will be “a referendum on reality and epistemology.”

Trump and his apparatchiks will not only step up their propaganda; they will increase their efforts to exhaust our critical thinking and to annihilate truth, in the words of the Russian dissident Garry Kasparov. We will see even more “alternative facts.” We will see even more brazen attempts to rewrite history. We will hear even more crazy conspiracy theories. We will witness even more lashing out at reporters, more rage, and more lies.

“The real opposition is the media,” Steve Bannon, the president’s former chief strategist, once told the journalist Michael Lewis. “And the way to deal with them is to flood the zone with shit.”…

As Bannon proposed, the right-wing media ecosphere is being flooded right now with a particular brand of shit and, over the weekend, the president’s twitter feed was consumed by it. Here are a couple of examples of things Trump retweeted to demonstrate the obsession.

With the attorney general’s decision to drop charges against Michael Flynn and the release of transcripts from interviews conducted by the House Intelligence Committee’s investigation of the Trump-Russia probe, the president and his enablers are attempting to distract Trump’s base from the reality of his coronavirus failures and seek revenge against those they consider their enemies.

There has been a lot written about Barr’s twisting of the truth in the Flynn case, but not as much about what we’ve learned from the transcripts that were released last week. But Fox News hosts have been quick to suggest that they provide further exoneration of Trump. A theme that has emerged is to suggest that members of the Obama administration admitted behind closed doors that there was no evidence that warranted an investigation. Here is a screenshot from a segment by Jesse Watters that was tweeted by Trump. 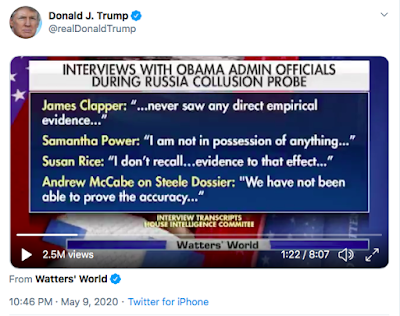 Tucker Carlson used some of those examples as well. This is the one that caught my eye. 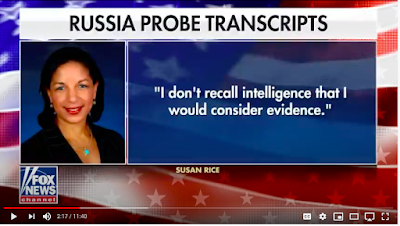 Whenever a Fox News host uses a quote that is limited to a sentence or a phrase, you can almost always assume that it has been taken out of context. So I decided to actually read the transcript of Susan Rice’s testimony to check out that assumption. It probably won’t surprise you to learn that it was, in fact, taken out of context.

The quotes used by both Watters and Carlson were in response to a specific question from former Representative Trey Gowdy (emphasis mine).

Mr. Gowdy: Before you separated from service, did you have any evidence, or did you come across any evidence—or intelligence—that Donald Trump conspired with the Russian government to influence the 2016 election.

Eventually, Gowdy went on to ask Rice the same question as it relates to members of Trump’s campaign staff. Almost the entirety of Rice’s response to that question has been redacted, but in the bits that aren’t, she is obviously talking about having seen evidence that indicated the potential for a conspiracy when it came to both Michael Flynn and Carter Page, two of the staff who were actually targets of the FBI’s counterintelligence investigation.

During subsequent questioning by Representative Adam Schiff, Rice dropped some information that hasn’t been clearly documented in the press but indicates why there were mounting concerns about Michael Flynn. She reported that, during the transition, the person who was initially assigned by the Trump team to work on matters related to the National Security Council was Marshall Billingslea.

So it was in the context of one of the relatively early meetings between my chief of staff and the head of the Trump NSC landing team that my chief of staff conveyed to me…that Mr. Billingslea expressed concern to them about the frequency of General Flynn’s contacts with Ambassador Kislyak and potentially the substance of the contacts and, as I said, asked for background on Ambassador Kislyak that he seemed to want to use to persuade General Flynn that perhaps he should scale back the contacts.

The case Attorney General Barr made for dropping the charges against Flynn was that his lies were not “material” to the investigation because the FBI had no reasonable basis even to interview him. However, a member of Trump’s own transition team was so disturbed by Flynn’s contacts with the Russian ambassador that he shared his concerns with Rice’s chief of staff.

At this point, it appears as though the mainstream media is done with the Russia-Trump story, so, while Fox News and other right-wing media outlets cherry-pick quotes and turn them into lies, there hasn’t been much of an attempt to correct the record. Meanwhile, the president uses those lies to claim that the whole thing wasn’t just a hoax, but an attempted coup that will “make Watergate look like a parking ticket.”

When Wehner says that Trump and his enablers will attempt to “exhaust our critical thinking and to annihilate truth,” this is just one example of how they do that. If you have the stomach to listen to the entire segments from Tucker Carlson and Jesse Watters, or review Trump’s Twitter feed, you’ll see that I have only debunked one of the myriad of lies that are being told. If I’d gone through the whole list, I would have had to write an entire book. That’s exactly what Bannon was referring to when he suggested that Trump and his enablers should “flood the zone with shit.”

Wehner is exactly right. The one thing voters need to know about this election is that the current occupant of the Oval Office wants to annihilate the truth. He has an army of enablers, including the attorney general, who are more than willing to help him do that.

Left-leaning thinkers have been inveighing against the problems of globalized...

The Justices are distracting the public with narrow opinions that leave no side satisfied, just like those old Magic 8 balls. Soon, they’re going to have to make a decision.

The pandemic ushered in flexible work policies. Here's why employers should keep them in place in the post-Covid era.