Trump’s Director of National Intelligence Richard Grenell has released records of people in the Obama administration who requested the unmasking of names in intelligence reports that related to Michael Flynn. The Trump campaign made it immediately clear why they had done so by responding to the fact that former Vice President Joe Biden’s name appeared on the list. 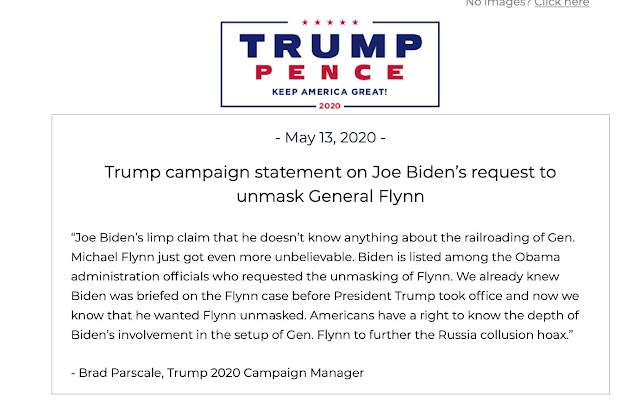 The first thing to keep in mind are the facts about the process of unmasking.

As the released document explains, every person on the list who made an unmasking request “was ‘an authorized recipient’ of the information and the unmasking was approved through the agency’s normal protocol,” so there was nothing illegal or inappropriate about Biden’s request—or any of the others on the list. However, the names and dates provide some clues about why Obama officials were concerned about what they were seeing in these intelligence reports.

Given that the timing of this release of classified information coincides with Attorney General Barr’s announcement that he was dropping charges against Flynn, most of the discussion has focused on the December 29th calls between Flynn and Russian Ambassador Kislyak. The conversations between the two included a discussion of sanctions and other measures the Obama administration announced that day in response to Russia’s attempts to interfere in the 2016 election. Flynn not only lied about that to the FBI but was eventually forced to resign his position in the Trump administration for lying to Vice President Pence and others in the White House.

But of the 49 requests for unmasking that revealed the name of Michael Flynn, 42 of them came before December 29, 2016. The vast majority of requests came in early to mid-December and the people making them include several officials involved with NATO, Syria, and Turkey, as well as UN Ambassador Samantha Power. A quick review of Flynn’s activities at the time tells us why they were so concerned.

December 1 – Flynn and Kushner met with Kislyak at Trump Tower—a meeting they didn’t disclose until March 2017. According to a written statement Kushner submitted to the Senate Intelligence Committee, Kislyak wanted “to facilitate a discussion with Russian generals about Syria” and they discussed the possibility of setting up a back channel for communications with Moscow at Russian diplomatic facilities. We also know that Flynn was interested in talking to Moscow because he had developed a plan for the U.S. and Russia to cooperate militarily in Syria.

In May 2017, this is what reporters at the Washington Post revealed.

Ambassador Sergey Kislyak reported to his superiors in Moscow that Kushner, son-in-law and confidant to then-President-elect Trump, made the proposal during a meeting on Dec. 1 or 2 at Trump Tower, according to intercepts of Russian communications that were reviewed by U.S. officials. Kislyak said Kushner suggested using Russian diplomatic facilities in the United States for the communications.

When Obama officials learned from those intercepts about what Kislyak reported to Moscow, it is understandable why they would want to know the name of the person(s) who were involved in those undisclosed meetings. The discussions would be particularly pertinent to those who were involved in our foreign policy with regards to Syria.

Mid-December – One of the reasons why Flynn pleaded guilty to lying to the FBI about his telephone calls with the Russian ambassador is because prosecutors had proof that he had failed to disclose the fact that he was acting as a paid lobbyist on behalf of the Turkish government. Here is what we learned about that during the Mueller investigation.

Federal investigators are examining whether former National Security Adviser Michael Flynn met with senior Turkish officials just weeks before President Donald Trump’s inauguration about a potential quid pro quo in which Flynn would be paid to carry out directives from Ankara secretly while in the White House, according to multiple people familiar with the investigation.

Investigators for Special Counsel Robert Mueller’s probe into Russia’s interference with the U.S. presidential election recently questioned witnesses about the alleged December 2016 meeting between Flynn and senior Turkish officials, two people knowledgeable with the interviews said. The questions were part of a line of inquiry regarding Flynn’s lobbying efforts on behalf of Turkey.

To the extent that the intelligence community was reporting on surveillance related to Flynn’s activities on this matter, it is understandable why Obama officials involved with NATO and Turkey would be particularly concerned.

December 22 – Flynn called Kislyak (at Kushner’s request) to ask if Russia would delay or defeat an upcoming U.N. Security Council resolution vote condemning Israel’s building of settlements in the West Bank and East Jerusalem. The Obama administration had agreed to allow the resolution to come up for a vote — angering Israeli Prime Minister Benjamin Netanyahu. It is understandable that Ambassador Power would want to know who was talking to the Russian Ambassador about undermining U.S. policy at the U.N.

Joe Biden is actually one of the few people who made an unmasking request after Flynn’s telephone calls with Kislyak about U.S. sanctions. His request came on January 12th—the same day that David Ignatius published a report about the call in the Washington Post. So by then, it was already public knowledge.

I realize that’s a lot of information to absorb and that Trump has a much easier job in simply yelling: “It was a crime and Obama/Biden were in on it!” But the facts are that Flynn’s behavior was unprecedented and deeply disturbing. Members of the previous administration didn’t just have a legitimate cause for concern, they would have been derelict in their duty to ignore it.