As we all learned in 2016, the popular vote in this country is not how we elect a president. We do that via the Electoral College. That is why I found this analysis from G. Elliot Morris to be very interesting.

Here's a simple average of the polls today( with small-n states filled in with a demographics-based regression model). Fact is, if we're talking about AZ, GA, NC & OH being competitive, we're also talking about an electoral stage that's really pretty tilted against the incumbent. pic.twitter.com/a8gxo1OaLM

To demonstrate how that is tilted against the incumbent, here is how his model translates into Electoral College votes. What Morris didn’t mention is that, if Florida turns blue, Trump’s options for winning become practically nonexistent. That is where the president’s handling of the coronavirus is hurting him badly—especially with older voters.

Any erosion of support among seniors could doom Trump if this November’s election is as close as four years ago…But as is often the case during close elections, it could all come down to Florida. Some recent polls from the state put Trump at a 10-point disadvantage – others put the race much narrower – to his presumptive challenger, Joe Biden, and Trump’s team is said to be keenly aware the deficit.

As that article points out, older voters could also be a factor in a state like Arizona, which is home to a lot of retirees. But there is something else going on in Arizona that is worth noting. Take a look at this chart of the median age in each state. 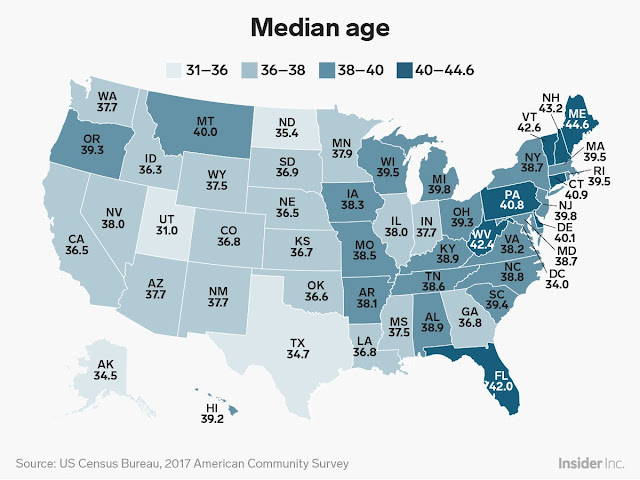 What is immediately clear is that the western states are generally younger than the eastern states. That is surprisingly true of Arizona. And in 2016, voters in that state under the age of 44 favored Clinton by 10 points. Add that to the erosion of support for Trump with older voters and it gives you a pretty good idea about why Arizona is trending in Biden’s direction.

What is equally interesting is that Texas has the third-youngest population, surpassed only by the sparsely populated states of Utah and Alaska. In 2016, Clinton won a six-point advantage with Texans under the age of 44. In Morris’s model, it is still barely red, but taking age into consideration gives us one more reason why Texas is on its way to becoming a swing state.

When it comes to the impact of age on politics, the most enduring myth is captured by the quote, “If you are not a liberal at 25, you have no heart. If you are not a conservative at 35, you have no brain.” The idea is that young people are more radical and mellow with age. But Geoffrey Skelly documents the fallacy contained in that assumption.

The last Democratic nominee who won voters 65 and older was Al Gore in 2000, according to national exit poll data. But at the time, that was the trend. Older Americans — those who came of age during the Great Depression and New Deal era, a period in which the Democratic Party was dominant — were disproportionately Democratic-leaning in the late 1990s and early 2000s. And political science has found evidence that party loyalties developed at a young age can persist over the course of a person’s life.

Simon Rosenberg does a good job of summarizing the political environment that has shaped the views of those under 45.

It is no wonder that if this is your lived experience, you would lean towards the Democrats today. The two Democratic presidents in your lifetime produced long economic booms, vast improvements in healthcare, and global cooperation and respect, while the three Republican presidents brought recession, rising deficits, disastrous adventurism abroad, and well, Trump. Furthermore, if you are under 45, your life has been shaped by the rise of a truly global economy, an interconnected world enabled by the Internet, a far more diverse population here at home, and important steps towards greater equality for all. This is the world you know — and it is almost as if Trump and the current GOP have risen to roll back and reject all that you understand America to be.

It has taken a lot for older voters to begin to trend away from Trump, but it looks like his mishandling of the coronavirus crisis might have finally done the trick. But when it comes to younger voters, Republicans face an even more daunting challenge. They are in the process of losing a couple of generations of voters whose party loyalties will persist as they age.

We are currently in the midst of a major political realignment that is being fueled not only by race, but by age as well. Donald Trump didn’t start that and he won’t be the end of the process. But there is nothing on the horizon that looks good for the long-term future of the Republican Party.