Back in the summer of 2008, the Republicans held their national convention in my home town of St. Paul, Minnesota. The city braced for protests, while some law enforcement leaders spread lies about reports of coming violence. As a result, police officers from all over the state joined city and county officers to stage a response.

Recognizing the potential for escalation between protesters and police officers, a group of local citizens formed the MN Peace Team to mediate between the two groups. 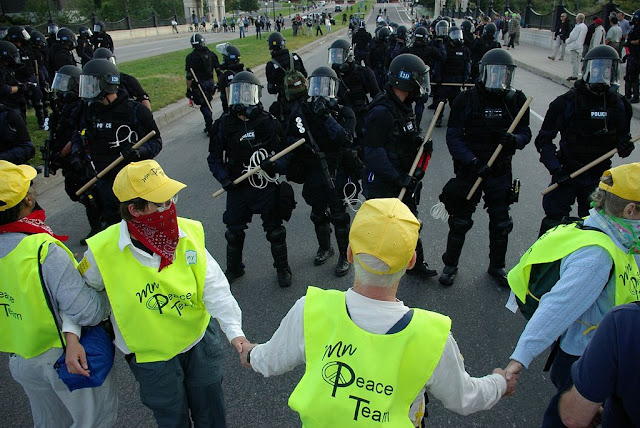 I tell that story because the same thing is happening right now in Minneapolis in the aftermath of the murder of George Floyd. According to the Facebook post of this photo, “This is a line of white people forming a barrier between black protestors and the police.” 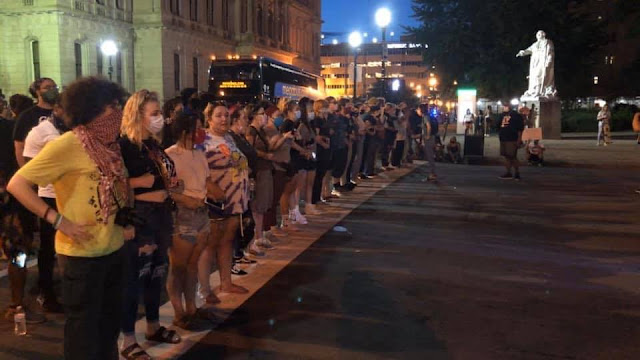 While the actions of these citizens are both courageous and laudable, it frankly breaks my heart because it is such a vivid demonstration of all that is wrong with law enforcement in this country. After all, it is supposed to be their job to be “peace officers.”

With stories about black reporters covering the unrest in Minneapolis being arrested while white reporters are left alone, it is important to keep in mind that the story might be even deeper than that. Here is video of a man wearing the kind of gas mask issued to riot police while carrying an umbrella (on a sunny day) and wielding a hammer to break storefront windows.

That’s not a protestor pic.twitter.com/7OrKbIEQ5W

There are those on Twitter who claim to have identified the man as a local police officer, but I’ll refrain from doing so until we get something official.

The reason I am suspicious is that I know a thing or two about how things work with the police department in Minneapolis. Here is what I tweeted about that recently.

Of course, Mayor Frey is right.

But what you should know about Minneapolis is that the police union wields enormous power. Watch for how they go after Frey in the coming days. https://t.co/3JkV8FApmo

To get some idea of the battle that goes on between the mayor and the police union, here is a story that was reported about a year ago.

In open defiance of Minneapolis Mayor Jacob Frey, the union that represents the city’s roughly 900 rank-and-file police officers announced that it is partnering with a national police organization to offer free “warrior-style” training for any officer who wants it…

The announcement comes in response to Frey’s ban of the popular training style, which he first revealed in his State of the City address last week. Frey said at the time that Minneapolis would become the first department in the country to eliminate “fear-based” training…

Many policing agencies, including Minneapolis’, are moving toward “guardian”-oriented tactics, which focus on de-escalating tense situations and use of deadly force as a last resort. But opponents of this approach argue that such techniques endanger officers’ lives by teaching them to let their guard down.

So the mayor banned the use of this “warrior-style” training, with concurrence from the city’s police chief. But the union defied the ban and subsidized the training for officers anyway. It is also the police union that has defended Officer Derek Chauvin, the one who kept his knee on George Floyd’s neck for over seven minutes, when he was the target of 18 prior complaints.

I am sympathetic to those who claim that officers like Chauvin are the “bad apples” in departments where honorable men and women serve. I’ve personally known police officers who earned the title of being peace officers. But as they say, “the fish rots from the head,” and it is clear that the police union in Minneapolis went rogue a long time ago.

It is also worth noting that there is a political angle to all of this. Not only did Trump tweet that Mayor Frey is “very weak,” he went on to blast out the threat of “when the looting starts, the shooting starts.” I suspect that the president remembers what happened when he came to Minneapolis last fall.

Lt. Bob Kroll, the head of the Minneapolis police union, took the stage prior to President Donald Trump at a downtown rally Thursday night, praising the president for standing behind law enforcement.

“The mayor said the President wasn’t welcome but the Police Federation of Minneapolis begs to differ,” Kroll told the rally crowd.

Kroll, the president of the Minneapolis Police Federation, wore a bright red “Cops for Trump” T-shirt, and spoke at Target Center about how the president supports police departments across the country as they face scrutiny following years of high-profile police shootings.

“The Obama administration and the handcuffing and oppression of police was despicable,” Kroll said. “The first thing President Trump did when he took office was turn that around … he decided to start let cops do their job, put the handcuffs on the criminals instead of (on) us.”

That would be the same president who likes to talk about “the good old days.”

In most instances, Democrats are right to defend the unions that represent civil servants from attempts by Republicans to break them. But at least for the city of Minneapolis, lives are on the line and nothing is going to change until the power of the police federation is held in check.