A few months ago, Senate Republicans had the chance to rid the White House of the stench emanating from a lawless president. Of course, all but one of them took a pass. After Trump took a deeper dive into fascism by sending troops to attack peaceful protesters while threatening to deploy the U.S. military against American citizens, reporter Kasie Hunt asked them to respond. It was a veritable walk of shame.

BACK ON THE HILL: @kasie asks Republican Senators about how peaceful protests were dispersed last night in Washington pic.twitter.com/KL4V6L2Vfb

The one exception was Senator Lisa Murkowski, who said that what she saw didn’t represent the America she knows. Senator Rob Portman followed up with Ohio reporters to complain about the words Trump used. Here is Hunt’s full exchange with Senator Mike Lee.

Q: Do you have any concerns of what we saw unfold at the White House last night with the protestors?
LEE: Yes.
Q: Yes? What are your concerns?
LEE: Violence is scary.

In summary, what we heard is either silence or inane statements like “violence is scary.”

There are, however, two Republican Senators who seem to be vying for the position of fascist-in-waiting. When asked if the actions taken by the White House were an abuse of power, Senator Ted Cruz responded: “By the protesters, yes.” Even though the people he was talking about were demonstrating peacefully, Cruz went on to praise the president’s actions and referred to the protesters as terrorists.

But in a contest over who is running to be the next fascist-in-chief, Senator Tom Cotton left Cruz in the dust. He began with this tweet on Monday.

If local law enforcement is overwhelmed and needs backup, let's see how tough these Antifa terrorists are when they're facing off with the 101st Airborne Division.

We need to have zero tolerance for this destruction.

That turned into a full-blown op-ed that was published by the New York Times. And of course, the president retweeted it. 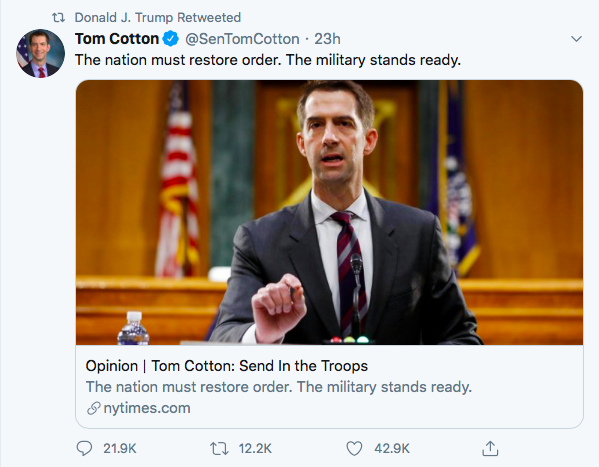 Given that Cotton got a law degree from Harvard and served in the U.S. Army, he should know that what he’s recommending is not only inflammatory, but racist, which is why there has been a groundswell of response from former military leaders to condemn the president’s threat.

In summary, what we have from Senate Republicans in response to the president’s latest foray into fascism are:

If these senators fail to stand up for our constitutional rights as citizens of this democracy, their names “will be tied to [Trump’s] with a cord of steel and for all of history,” as Representative Adam Schiff said at the Senate impeachment trial. I recognize that most of these politicians are immune to that kind of shame. But history won’t be concerned about their psyches. It will be noted that they betrayed America.

With the arrival of the Omicron variant, Biden should declare war on Republican governors who are blocking reasonable mask and vaccine mandates. It’s good policy and good politics.