Those of us who grew up watching television were surprised at some point to find out that there were professions other than being a police officer, lawyer, or doctor. An incredibly disproportionate number of TV shows are dedicated to plots involving those three professions. And because the purpose of television is to attract eyeballs for advertisers (or to sell cable subscriptions), everything was dramatized. We were trained to assume that police work involved tracking down really bad guys, which always ended in fights, shoot-outs, or car chases.

None of that, however, represents reality. As an example, Philip Bump took at look at the data on police calls for service in New Orleans during 2019, which can be placed into seven categories.

While television cop shows focus exclusively on the last three, those calls make up less than five percent of the total. On the other hand, the first category made up 70 percent of the calls. Bump provided this helpful chart. 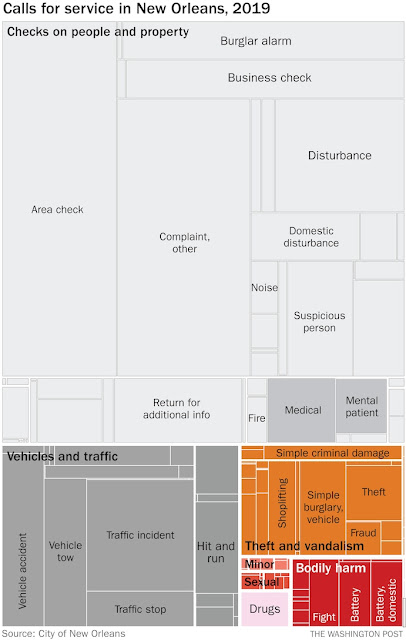 Jerry Ratcliffe found something similar with data from the Philadelphia Police Department.

Of course, it’s not just television that presents this distorted view of police work. News organizations do the same thing by focusing their reporting on that five percent in the bottom righthand corner. That explains why, as Pew Research found, voters’ perception of crime is at odds with reality. The facts are that, “between 2008 and 2015 (the most recent year for which data are available), U.S. violent crime and property crime rates fell 19% and 23% respectively.” Nonetheless, 57 percent of Americans said crime had gotten worse since 2008.

That perception is at least part of the reason for this disconnect. 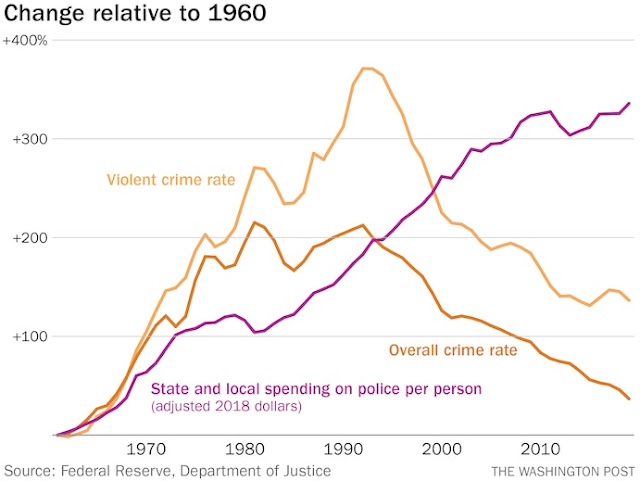 As you can see, while crime rates have fallen, spending on police has continued to skyrocket.

Former Dallas Police Chief David Brown explained part of the problem after several of his officers were killed during a protest against police brutality.

[W]e’re asking cops to do too much in this country. We are. We’re just asking us to do too much,” Chief Brown said. “Every societal failure, we put it off on the cops to solve. Not enough mental health funding. Let the cop handle it. Not enough drug addiction funding. Let’s give it to the cops. Here in Dallas, we’ve got a loose dog problem. Let’s have the cops chase loose dogs. You know, schools fail. Give it to the cops…Policing was never meant to solve all of those problems,” Brown said to reporters.

Those who are suggesting that “defund the police” is politically damaging for Democrats have a good point. But that is primarily because television shows and news organizations have completely distorted both the job of police officers and the level of crime in our communities.

When you get the facts, it’s not hard to imagine cops continuing to respond to that 5 percent of calls for service that are covered by the last three categories in Bump’s list up above (albeit with some of the reforms currently being considered). But other groups of trained professionals would be perfectly capable of handling the other 95 percent of calls for service.

I happen to know from experience how that can work. For almost 20 years the non-profit organization I worked for partnered with the police to respond to calls for domestic service that involved a mental health crisis with a child or teenager. You might be surprised (or maybe not) how often parents call the police because their son or daughter has gotten out of control. Our organization had teams of staff that were available 24 hours per day, 7 days per week to respond in the home to those situations. Talking with trained professionals worked. Over 95 percent of the cases didn’t require further police involvement or placement in a treatment facility. We were able to accomplish a lot of the same goals by assigning behavior intervention specialists to schools to replace an over-reliance on the use of police and suspensions.

That is the kind of thing that is possible in all of our communities. It requires leaders being prepared to envision something different, including the role of police officers. We just have to get away from thinking that guys with guns are the answer to everything.