Writing at the Financial Times, Janen Ganesh posits that conservatives have lost the culture war.

In the round, though, “movement conservatism” is most notable for the gap between its political success and actual outcomes, at least in the realm of culture. Its organisational flair, its ecosystem of journals and think tanks, even its elected presidents have stood athwart history, yelling “stop!”, as [William] Buckley suggested. If anything, history sped up. The recent statue-felling is just the outward expression of decades of social change.

When we talk about the culture war, everyone assumes they know what we mean. But just to be clear, it is a reference to the attempt by conservatives to preserve the status quo when it comes to racism, sexism, homophobia, and religious bigotry.

The initial round of the culture war was launched when Republicans embraced the so-called “Southern Strategy” of speaking in racist dog-whistles to woo the support of southern Democrats after passage of the civil rights laws in the 1960s. Clare Malone has written an excellent piece documenting the history of how the Republican Party spent decades making itself white. Doing so meant tapping into the racist fears of their supporters.

As Katherine Stewart outlined in her book, The Power Worshippers, the next stage of what we call the culture war occurred when Paul Weyrich worked to establish a coalition between Goldwater supporters and Christian nationalists, leading to the election of Ronald Reagan. Initially, Weyrich joined with leaders like Jerry Falwell, Pat Robertson, and Bob Jones to fight against federal attempts to desegregate their schools. But they eventually had to make adjustments.

As Weyrich understood, building a new movement around the burning issue of defending the tax advantages of racist schools wasn’t going to be a viable strategy on the national stage. “Stop the tax on segregation” just wasn’t going to inspire the kind of broad-based conservative counterrevolution that Weyrich envisioned. They needed an issue with a more acceptable appeal.

What they settled on was the Supreme Court’s decision in Roe vs. Wade, which had initially been accepted by white evangelical Christians. But eventually they were able to make anti-abortion the rallying cry of the culture war. That was soon expanded to include things like a fight to maintain (Christian) prayer in schools and efforts to deny equal rights to gay and lesbian Americans. The culture war of today includes everything from claiming there is a war on Christmas to McCarthyite efforts to uncover Muslim plots to implement so-called “sharia law” in this country.

Before we declare the end of the culture war, it is important to know this history because, as Katherine Stewart notes, it has never really been about culture.

It is not a social or cultural movement. It is a political movement, and its ultimate goal is power. It does not seek to add another voice to America’s pluralistic democracy but to replace our foundational democratic principles and institutions with a state grounded on a particular version of Christianity answering to what some adherents call a “biblical worldview” that also happens to serve the interests of its plutocratic funders and allied political leaders…This is not a “culture war.” It is a political war over the future of democracy.

Let me give you a couple of examples for how that works. Back in the early 2000s, gays and lesbians were focused on fighting for equal protections in employment. But in the 2004 election, Karl Rove saw the opportunity to inflame the culture war by working to get defense of marriage on as many ballots as possible, assuming that would help George W. Bush win reelection. Similarly, Steve Bannon’s strategy was to inflame fears about immigration and race to propel Donald Trump into office.

The shift Ganesh recognizes is that we are reaching an inflection point in this country where the wedge issues of the culture war might not be sufficient for Republicans to maintain their power. One way to explain what’s happening is to look at a theory developed by Everett Rogers called the “diffusion of innovation.” It seeks to explain how, why, and at what rate new ideas and technology spread through cultures. The process is captured by this graph, with the blue line showing the rate at which people adopt new ideas and the yellow indicating market share. 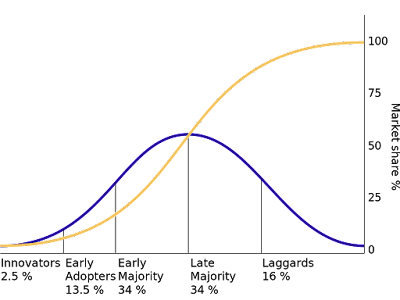 One way to think about the so-called “culture war” is that, on most of these issues, the late majority is in the process of adapting. Watching the bully-in-chief constantly rant about making America great again is simply speeding up the process.

But because the power brokers who manipulate people with the culture war have pretty much given up on governing and embraced grievance politics as their platform, they know that abandoning their current position would rob them of their only base of support. As a result, they are increasingly reliant on the anti-democratic means of voter suppression and gerrymandering. In the long term, that is a losing proposition. But the culture war won’t be over until they come up with a new strategy to gain power.