By the slimmest of margins, voters in Oklahoma passed a constitutional amendment to expand Medicaid in their state. Not only will that allow an additional 200,000 people to obtain health insurance, Keith Humphreys noted how it will impact the state more broadly.

This will help Oklahoma save its rural hospitals, turn back the opioid addiction & overdose crisis, raise healthy babies, and protect nursing home residents, among many other good things. https://t.co/hL9R80eBze

Of the 120 rural hospitals that closed due to financial constraints between Jan. 1, 2010, and Dec. 31, 2019, eight of them were in Oklahoma. Much of that happened because of a refusal in red states to expand Medicaid. And contrary to what Republicans would have you believe, one of the most effective tools for fighting the opioid crisis is the expansion of Medicaid. So all of this is great news for the citizens of Oklahoma, regardless of whether they supported the referendum or not.

With this vote, Oklahoma becomes the 37th state to expand Medicaid. As Johnathan Schleifer put it, “More than 50% of Republican Senators and Members will now represent expansion states.” 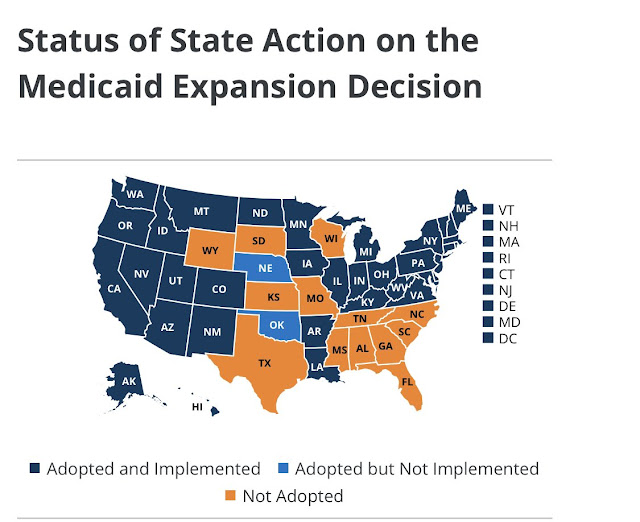 That’s the good news. But for a party that is asking the Supreme Court to rule all of the Affordable Care Act unconstitutional—including the expansion of Medicaid—this comes as really bad news. First of all, the voters of Oklahoma passed the expansion as an amendment to their state’s constitution—which means that Republicans in that state will have a harder time overruling the will of the voters with the kind of shenanigans we’ve seen in other states.

But the way the vote played out is also bad news for Republicans. The ballot initiative on Medicaid expansion received 30,000 more votes than those cast in the Senate primaries. It was the location of those votes in a state that went for Trump by 30 points that is fascinating.

Oklahoma has passed Medicaid Expansion by a narrow 1% margin. The win was heavily fueled by cities like Tulsa , Oklahoma City, and Norman. The measure failed in a large majority of the state's rural counties. #okprimary #OklahomaPrimary pic.twitter.com/JAMVOBUCff

Since 2016, we’ve heard a lot about the urban/rural divide in America. That is pretty much how this vote broke down in Oklahoma. Except this time, urban voters prevailed—even if by the slimmest of margins.

That might not be a harbinger of how things will play out in the November election. But it is certainly something to keep an eye on.