With even Fox News polls showing a sizable national lead for Biden over Trump in the upcoming election, the president has started to attack the network that has been one of his chief enablers. But there is one host that he still loves: Tucker Carlson. According to Gabriel Sherman, that’s who he goes to for advice.

Republicans that have spoken with Trump in recent days describe him as depressed and “down in the dumps.” “People around him think his heart’s not in it,” a Republican close to the White House said. Torn between the imperative to win suburban voters and his instincts to play to his base, Trump has complained to people that he’s in a political box with no obvious way out. According to the Republican, Trump called Tucker Carlson late last week and said, “what do I do? What do I do?”

As we’ve seen, Trump seems to have taken Carlson’s advice to follow his racist instincts and jettison the advice of Jared Kushner. But on Monday night, the Fox News host went deep into the gutters of hate. Carlson went after Senator Tammy Duckworth of Illinois simply because she’s landed on the list of women Biden is considering for his running mate. Teeing off a response from Duckworth about the need to have a discussion about our founding fathers who owned slaves, he said the following.

You’re not supposed to criticize Tammy Duckworth in any way because she once served in the military…When Duckworth does speak in public, you’re reminded what a deeply silly and unimpressive person she is…But in the face of all of this, the conclusion can’t be avoided. These people actually hate America. There’s no longer a question about that.

Just to be clear, Duckworth wasn’t just elected by the people of Illinois to represent them in the U.S. Senate, she is a Purple Heart recipient who lost both her legs while serving her country in Iraq. The trust fund guy who sits behind a desk every night spewing hate is the one accusing Duckworth of hating America because she supports the idea of having a dialogue about this country’s original sin. The Senator responded with this simple suggestion.

Does @TuckerCarlson want to walk a mile in my legs and then tell me whether or not I love America?

In case you think this is some new low for right wingers, I have two names for you: John Kerry and Max Cleland. The war they fought in was Vietnam, but their Republican opponents had no problem questioning their courage and patriotism. They just did it a bit more subtly than Carlson. While not based on military service, Republicans also challenged the patriotism of this country’s first African American president. So this is obviously part of the Republican playbook—especially when they’re feeling desperate. Trump has already picked up on the theme.

“We will never allow an angry mob to tear down our statues, erase our history, indoctrinate our children or trample on our freedoms,” Mr. Trump said, claiming that protesters — who have won broad public support, including from corporate America — were “not interested in justice or healing.”

Mr. Trump cast himself as the heir to “American heroes” who defeated Nazis, fascists, communists and terrorists, all but drawing a direct line from such enemies to his domestic critics.

The demands of the people Trump refers to as an “angry mob” are that we, as a nation, confront our racist history and the way it is currently playing out with incidents of police brutality. But to the president, people making those demand are comparable to Nazis, fascists, communists, and terrorists.

Hillary Clinton took a lot of heat in 2016 for saying that those spreading that kind of hate are in a “basket of deplorables.” Here’s my message to Carlson, Trump and all their enablers. 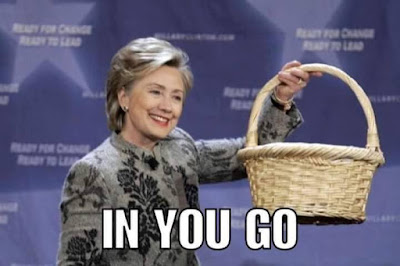 Jon Favreau once said that “Every election is a competition between two stories about America.” What we’ve seen from Carlson and Trump is the story of America that they want to tell. It is one where angry white men accuse anyone who challenges their privilege of hating America. Joe Biden has a different story of America.

American history is no fairy tale. It’s been a constant push and pull between two parts of our character: the idea that all men and women—all people—are created equal and the racism that has torn us apart.

Biden is absolutely right to suggest that this election is part of the struggle for the soul of America. No one makes that more clear than Trump’s deplorable advisor, Tucker Carlson.