The most populous states in America ranked in order are: California, Texas, Florida, and New York. As of Monday, here is what the data tells us about the spread of coronavirus in those states. 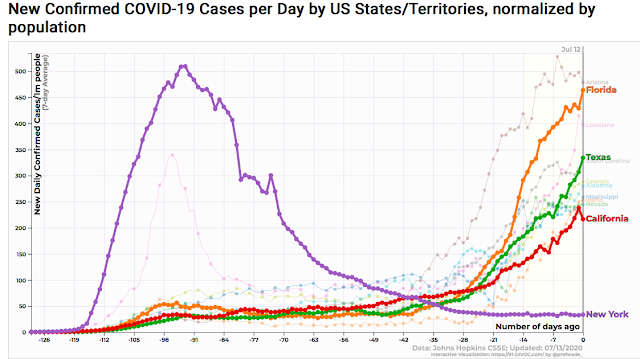 COVID-19 initially hit New York hard. But the state locked down and, for the most part, got the virus under control. Sunday marked the state’s first day with no confirmed or probable coronavirus deaths for the first time in months, down from nearly 600 deaths on April 7th.

On the other hand, California, Texas, and Florida are experiencing huge increases in the number of cases. As a result, Governor Newsom pretty much shut the state of California down again on Monday. In addition, large school districts in the state announced that they will go to online learning in the fall.

California’s two largest public school districts said Monday that instruction will be remote-only in the fall, citing concerns that surging coronavirus infections in their areas pose too dire a risk for students and teachers.

The Los Angeles and San Diego unified school districts, which together enroll some 825,000 students, are the largest so far in the country to abandon plans for even a partial physical return to classrooms when they reopen in August…

Republican governors in both Texas and Florida are following the lead of the Trump administration in continuing their process of re-opening the economy and the schools. That has teachers like Jennifer Boyer both scared and angry.

While record numbers of Texans are hospitalized and dying from COVID-19, the question of whether teachers will be pulled back into classrooms next fall, willing or not, has spawned pitched national and local battles over the safety of restarting in-person public education…

“I’m pretty angry. But I’m mostly angry at the high-up decision makers, all the way from the president to our state officials and the [Texas Education Agency],” says Boyer, who works with elementary school gifted students in San Antonio’s Northside Independent School District.

Boyer is worried about her own health. She suspects the medicine she takes to keep cancer in remission might put her at higher risk for COVID-19. But she is years from retirement and can’t financially afford to quit.

On Sunday, Education Secretary Betsy DeVos said, “There’s nothing in the data that suggests that kids being in school is in any way dangerous.” That is a lie. According to CNN, “Three teachers who shared a summer classroom at a school in Arizona all contracted coronavirus last month, leaving one of them dead.” On a larger scale, Udi Kliner, head of Israel’s public health service, told their parliament that “schools—not restaurants or gyms—turned out to be the country’s worst mega-infectors.”

Shouldn’t we check into those kinds of reports before we make both children and their teachers our guinea pigs in the midst of a pandemic?

Trump, DeSantis, and Abbott already have blood on their hands for the disastrous ways they have handled this pandemic. It’s hard to come up with words to describe where they’re heading unless they change course immediately.

Instead of sending doses to poor countries in short supply, we’re holding them past their point of expiration.