For those of us who live in the reality-base world, Donald Trump’s presidency has been exhausting. Future historians will write volumes about all of the ways he’s failed, so I won’t even try to summarize them. But for right now, everything else pales in comparison to the president’s mishandling of the coronavirus crisis. As this video demonstrates, he has been in denial about it since day one.

It took Trump until March 17th to admit that we were dealing with a pandemic. By that point, so was the rest of the world. Four months later, the U.S. has documented almost 3.5 million cases of COVID-19 and nearly 140,000 deaths.

While Trump’s initial denial of the problem certainly made things much worse in this country, the fact of the matter is that the pandemic didn’t care who was president and would have posed a huge problem to anyone that occupied the White House. But we are beginning to get a glimpse of just how much of the suffering being experienced by Americans can be laid directly at the feet of Donald Trump.

Two weeks ago the European Union began to reopen their borders to foreign travel. In a direct rebuke to this country, Americans remain banned from nonessential travel. As reported at the time, the decision was “based on health criteria, and European Union officials went to great lengths to appear apolitical in their choices.” Here’s a glimpse of what that data looks like. 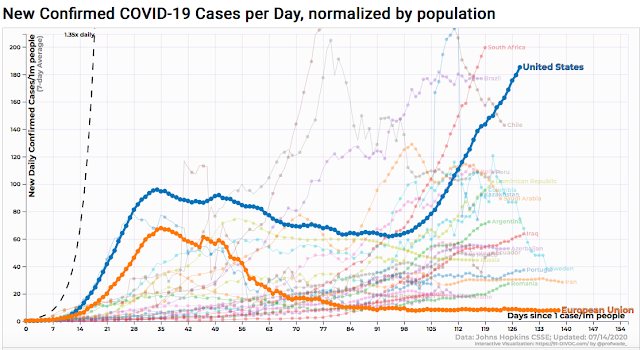 On a per capita basis, the European Union is now reporting about eight cases per one million people, while the U.S. is currently experiencing 185 cases per one million. As you can see, the trajectory of cases was initially pretty similar. But according to my calculations, the uptick in the U.S. began sometime around the first of April. We see exactly the same divergence in a comparison of the U.S. and Canada.

So on March 17th, Trump finally admitted that we were dealing with a pandemic. But a week later, he began talking about reopening the economy. Then on April 16th, the White House put out guidelines for states to reopen—which many Republican governors simply ignored and reopened immediately. That is precisely when cases began to surge in this country, even as the European Union and Canada began to get things under control.

According to the Washington Post, the Trump administration developed some new talking points about COVID-19 about a week ago.

The goal is to convince Americans that they can live with the virus — that schools should reopen, professional sports should return, a vaccine is likely to arrive by the end of the year and the economy will continue to improve.

White House officials also hope Americans will grow numb to the escalating death toll and learn to accept tens of thousands of new cases a day, according to three people familiar with the White House’s thinking, who requested anonymity to reveal internal deliberations. Americans will “live with the virus being a threat,” in the words of one of those people, a senior administration official.

“They’re of the belief that people will get over it or if we stop highlighting it, the base will move on and the public will learn to accept 50,000 to 100,000 new cases a day,” said a former administration official in touch with the campaign.

In other words, if we simply stop talking about this crisis, people will get over it and learn to live with the toll it is talking on our lives.

While Trump should be held accountable for his lack of response to coronavirus initially, it is clear that from the moment he admitted that we had a problem, he dropped the ball like a hot potato and, along with Republican governors, is responsible for everything that has happened since then. Beyond the decision by the Confederate states to succeed from the Union, I can’t think of a more colossal failure by public figures in the history of this country.  Unless something dramatic changes, we are on a trajectory for things to actually get much worse.