A story in the Wall Street Journal about what is happening in the Rio Grande Valley in Texas could be a prelude to what will happen elsewhere as cases of COVID-19 surge across many states. After Governor Abbott overturned local mask regulations and reopened the state, ICUs are full and ambulances have to wait up to 11 hours before hospitals can find a place for them.

Meanwhile, there are a couple of other stories that should be sounding alarm bells. First of all, as protests over police brutality continue in Portland, Oregon, “federal officers from the U.S. Marshals Service and Department of Homeland Security have stormed Portland’s streets as part of President Trump’s promised strong response to ongoing protests.” Apparently, these agents are traveling in unmarked cars and simply grabbing protesters off the streets. Here’s how one Senator from that state responded on Twitter.

A peaceful protester in Portland was shot in the head by one of Donald Trump’s secret police. Now Trump and Chad Wolf are weaponizing the DHS as their own occupying army to provoke violence on the streets of my hometown because they think it plays well with right-wing media.

Secondly, after so many former military leaders spoke up against this president’s threats to misuse the military, the Trump administration is quietly installing loyalists at the Pentagon.

The White House is taking advantage of a loophole to install loyalists to President Donald Trump in acting senior roles at the Pentagon, effectively skirting the Senate confirmation process.

While the number of vacancies isn’t new — one-third of the Defense Department’s 60 Senate-confirmed positions are filled on a temporary basis — the White House in recent months has been sending over people to fill open spots, as opposed to the more traditional method of tapping people within the Pentagon.

All of that is happening as the news of a potential landslide in the 2020 election continues to build. There’s been a lot of talk about how several incumbent Republican senators are extremely vulnerable in their quest for reelection. But today, the Cook Political Report made some changes to their House ratings—with 20 seats moving towards the Democrats.

Capturing what Trump and his enablers are doing to the Republican Party, Gallup is reporting a dramatic shift in party affiliation, especially over the last couple of months. 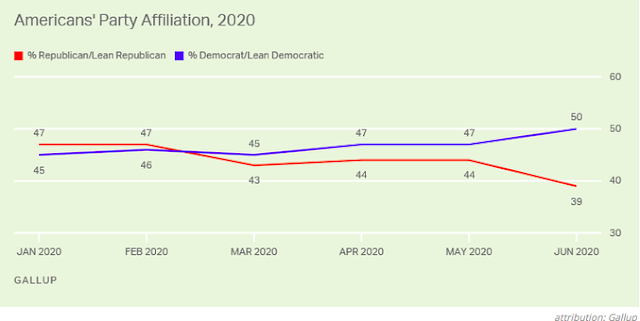 These two storylines help us understand why this is such a gut-wrenching time. I’ve always thought that the opening lines of Charles Dickens’ A Tale of Two Cities have been massively overused. But nothing does a better job of capturing the present moment.

So when Greg Dworkin’s friend suggested that this wasn’t so much an election as a countdown, it resonated deeply. The hope that we can turn things around in a few months is palpable. But what will happen over those months is terrifying. The clock is ticking.

Perhaps the saddest part of all of this is that it begs the question: “Why did it have to get this bad?” I’m sure that future historians will write volumes in an attempt to answer that question. But something is deeply wrong with our democratic republic when it takes a pandemic costing the lives of hundreds of thousands of Americans to get us to wake up and smell the stench emanating from the president and his congressional enablers.