Of all the tributes that have been written about Representative John Lewis since his passing over the weekend, the one that stood out to me came from Michael Fletcher, who said that “I didn’t understand John Lewis at first.”

My apprehension was rooted in the mistaken notion that Lewis was not angry enough. Why did he not demand revenge for the unspeakable racism he fearlessly confronted? How could he accept an apology from former Alabama governor George Wallace, a longtime segregationist who ordered the infamous Bloody Sunday attack on the bridge? Or forgive the pathological Bull Connor, the former public safety commissioner in Birmingham, Alabama? Why would he forge a relationship with former Klansman Elwin Wilson, who was part of a mob that in 1961 beat down Lewis and other Freedom Riders outside the whites-only waiting room at the Rock Hill, South Carolina, bus station?

But over the years my ambivalence melted into reverence as I came to better appreciate the power of Lewis’ grace. It armed him with undeniable moral authority that allowed him to change minds, and hearts. His willingness to forgive, along with his bravery and contempt for injustice were among the sturdiest pillars of his greatness.

The names George Wallace and Bull Connor are known to most of us with at least a passing acquaintance with this country’s history. But in case you haven’t heard about Elwin Wilson, Lewis told that story during a discussion with Barack Obama and a group of young men involved with the My Brother’s Keeper program. It came in response to the question, “In what way can being controversial be a benefit and a disadvantage?” Lewis talks about his experience with Elwin Wilson at the 4:13 mark in this video.

Wilson was one of the Klansman who beat Lewis during a stop on the Freedom Rides. But when, years later, he expressed remorse for what he had done, Lewis forgave him. Here’s what the congressman wrote at Wilson’s passing.

Elwin Wilson experienced what Martin Luther King Jr. told all of us that “hate is too heavy a burden to bear”. He demonstrated the power of love and the effectiveness of non-violent direct action not only to fix legislative injustice but to mend the wounded souls in our society, the soul of the victim as well as the perpetrator.  Elwin Wilson shows us, that people can change, and when they put down the mechanisms of division and separation to pick up the tools of reconciliation, they can help build a greater sense of community in our society, even between the most unlikely people.  Elwin Wilson proves that we are all one people, one family, the human family, and what affects one of us affect us all.

Fletcher’s initial misgivings about Lewis reminded me of something Ta-Nehisi Coates wrote about Martin Luther King, Jr. just after the election of Barack Obama in 2008.

There are still those today who question the use of nonviolent civil disobedience, especially during an era when Donald Trump and his enablers are threatening to not only roll back the gains made during the Civil Rights Movement, but are threatening the very foundation of our democratic republic. That is primarily because the current crisis makes it difficult, if not impossible, to maintain that “certifiable faith in humanity” that Coates wrote about.

The truth is that there were multiple elements of the Civil Rights Movement that can be credited with bringing about the end of Jim Crow laws. There was the pride and fearlessness that spread from people like Malcolm X and the Black Panthers. There was the coalition that began to develop in Chicago under the tutelage of Fred Hampton. But take a look at how David Remnick told the story of what happened on the bridge in Selma over 50 years ago.

Given one minute to disperse by the troopers, Lewis had the protesters kneel in prayer. They would not leave. “And then they were upon us.” The troopers charged, and the first among them brought down a nightstick on the left side of Lewis’s skull. His legs gave way. “I really thought I was going to die,” he said. He curled up on the ground, as he had been trained, in a “prayer for protection” position.” The trooper hit him again. And then came the canisters of tear gas. His skull fractured, his coat a mess of mud and blood, Lewis refused to go to the hospital. Barely conscious, he reached Brown Chapel, the headquarters of the movement, ascended to the pulpit, and told those gathered, many of them still gasping from the tear gas, “I don’t know how President Johnson can send troops to Vietnam. I don’t see how he can send troops to the Congo. I don’t see how he can send troops to Africa, and he can’t send troops to Selma, Alabama. Next time we march, we may have to keep going when we get to Montgomery. We may have to go on to Washington.”

That night, an audience of forty-eight million people watched a fifteen-minute report on Selma. President Lyndon B. Johnson, who had urged civil-rights leaders to force his hand if they wanted him to support a voting-rights bill, now saw that it was time to promote one. On national television, he compared Selma to Lexington and Concord as a “turning point in man’s unending search for freedom.” And the Voting Rights Act—now under assault in many ways—became law.

In words that were partially prophetic, a beaten and bloodied John Lewis was already talking about the “next time we march.” That is why, after all of the tributes, this is the image that brought me to tears at the passing of a truly great man. 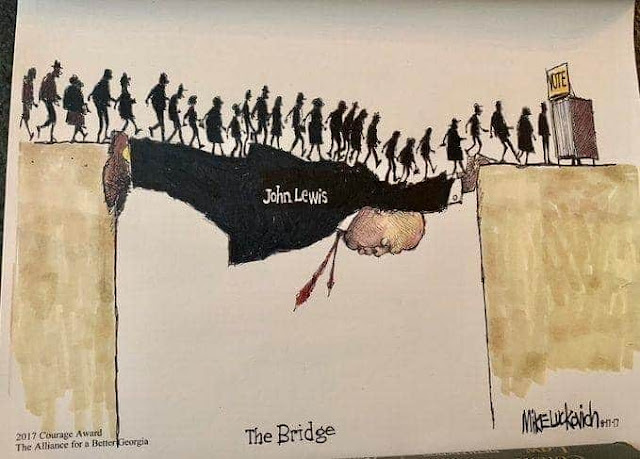 John Lewis was willing to literally put his body on the line to live out the words of Dr. Martin Luther King, Jr.

An individual who breaks a law that conscience tells him is unjust, and who willingly accepts the penalty of imprisonment in order to arouse the conscience of the community over its injustice, is in reality expressing the highest respect for the law.

The backbone of any commitment to nonviolent civil disobedience is a belief that the conscience of the community can be aroused. That’s why Coates referred to it as “an almost certifiable faith in humanity.” I can’t imagine a more courageous act. But John Lewis and many who joined him weren’t going to be satisfied with changing the laws. He thought that the power of love could “mend the wounded souls in our society, the soul of the victim as well as the perpetrator.”

There is a word in South Africa that captures that spirit—Ubuntu. Here is how Barack Obama described in at the memorial service for Nelson Mandela.

He not only embodied Ubuntu; he taught millions to find that truth within themselves. It took a man like Madiba to free not just the prisoner, but the jailor as well; to show that you must trust others so that they may trust you; to teach that reconciliation is not a matter of ignoring a cruel past, but a means of confronting it with inclusion, generosity and truth. He changed laws, but also hearts.

I am frankly overwhelmed and humbled by the courage of people like John Lewis and Nelson Mandela. I have serious doubts about my ability to live up to their example, but I also know what happens when whole groups of people are assumed to be evil villains that are beyond redemption. Human history is replete with examples of the death and destruction that flows from that well. That’s why I’ll continue to admire people like John Lewis and do my best to learn from his life.