During the 2016 presidential election, Donald Trump reversed a troubling trend in politics. His campaign raised less money than the previous Republican nominee, Mitt Romney. According to Open Secrets, Trump raised $330 million, compared to Romney’s $450 million in 2012. What isn’t accounted for in those numbers, however, is that Trump received an estimated $5 billion in free media time due primarily to his explosive rhetoric.

Four years later, the Trump campaign had already out-raised their 2016 haul by the first quarter of 2020, bringing in $414 million. But in addition to the constant reporting about how much a campaign has raised, an equally important question is how the money is spent. That is where a recent report in the New York Times from Shane Goldmacher and Maggie Haberman comes into play.

Of the $1.1 billion [Trump’s] campaign and the [RNC] raised from the beginning of 2019 through July, more than $800 million has already been spent. Now some people inside the campaign are forecasting what was once unthinkable: a cash crunch with less than 60 days until the election, according to Republican officials briefed on the matter.

There are those who saw this cash crunch coming when the campaign went dark on television advertising during the Republican National Convention. Then last week it was reported that they had pulled all advertising in Arizona, a must-win state for Trump.

According to Goldmacher and Haberman, “more than $350 million — almost half of the $800 million spent — went to fund-raising operations.” But much of it also went to stroke Trump’s ego, including $11 million on Super Bowl ads to keep up with Michael Bloomberg and $1 million on television advertising in Washington, D.C. so the president could see himself portrayed in his own media market. Or course, there is also corruption with the major expenditures at Trump’s properties, as well as payment of his legal expenses.

It should come as no surprise that the grifter who currently occupies the Oval Office is ripping off his campaign donors. This is the man whose businesses declared bankruptcy six times and went to court 3,500 times, primarily over payments to contractors. As the New York Times documented, Trump blew through over $1 billion in business losses during the decade before Russian companies flooded them with cash (according to his two sons).

Even more disturbing is what the president has done with our tax dollars. Take a look at what was happening to the federal budget deficit by the end of 2019 before the pandemic. 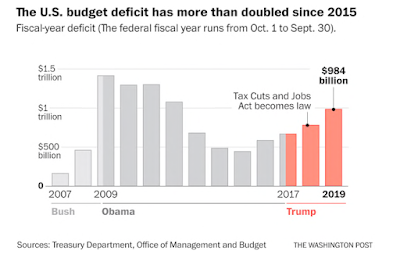 It is unusual for the government to run such a large budget deficit during a period of economic growth, because spending on unemployment and other benefits tends to contract and tax revenue often grows. But the White House and Congress have contributed to the deficit’s surge by enacting large spending increases and passing the 2017 tax cut law.

Prior to the pandemic when unemployment was reaching record lows, Trump and his Republican enablers in Congress managed to increase the deficit by nearly 50 percent.

When it comes to money, Trump always ripped off customers, contractors, and business associates. As president, he’s doing the same thing to taxpayers and donors.