The most poignant response to revelations about Trump’s handling of the coronavirus, as cataloged in Bob Woodward’s Rage, came from a Twitter user named Charles Murphy.

So here we are. Standing on 5th avenue with 190,000 corpses and Trump holding a smoking gun in plain sight. Let's see what happens.

But as Martin Longman suggested, we already know what’s going to happen. Trump’s supporters will buy into the idea that the president downplayed the threat to avoid a panic, even though, as Glenn Kessler points out, his presidency is devoted to inducing panic.

If the revelations we’ve heard recently aren’t penetrating the denial reflexes of Trump’s supporters, it is likely nothing will. So perhaps it’s time to take a look at a presidential race that isn’t likely to change much over the next two months.

When it comes to national polls, the three prominent aggregators are pretty much aligned, with FiveThirtyEight showing a 7.6 lead for Biden, RealClearPolitics is at 7.5 and the Economist has it at 8 points. But as we all know, the real story is in the state polls. Geoffrey Skelly has provided this helpful graph on how things have changed since before the conventions. 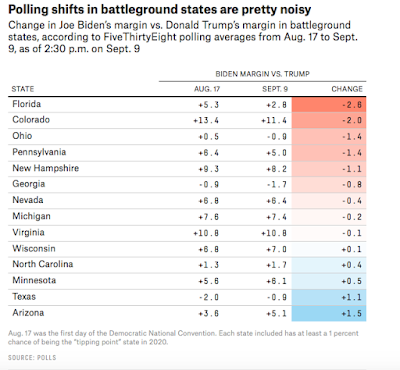 Other than Florida, the changes have either come in states where Biden holds a substantial lead, been minimal, or shifted in Biden’s favor. So what happened in Florida? As Skelly points out, the move towards Trump has come primarily from Cuban Americans. For example, “a Miami Herald/Bendixen & Amandi survey of just Miami-Dade County, home to two-thirds of Florida’s Cuban population, found them breaking for Trump 68 percent to 30 percent.”

This solidification of the Cuban-American vote behind Trump might be less of a harbinger about the national election and a rather localized event. At the Republican gathering, Cuban American Maximo Alvarez, who also happens to be a businessman from Miami, gave an emotional speech in which he made a thinly veiled comparison between the Democrats and Fidel Castro. Alvarez ended by saying that the 2020 presidential election would be a choice between freedom (Trump) and oppression (Biden). That is the kind of message that would appeal to older Cuban Americans who certainly tuned in when one of their own was featured.

What we have then, is a race that has tightened a bit in Florida, but Biden still holds a lead that is larger than the one Trump has in Iowa, Ohio, Georgia, and Texas. So if the election were held today, this is what the Electoral College would look like. I know that a lot of Democrats don’t want to hear that because, as Alex Seitz-Walz wrote, the liberal party has a tendency “to see only the dark linings of silver clouds.” But Markos Moulitsas made a great counter-argument to that tendency.

None of this means we take our feet off the pedal, of course. But really, is anyone going to do that anyway? We didn’t in 2018, despite all the great signs of impending victory. Heck, the sweet taste of big success is a motivator. So none of that silly “act like we’re 10 points down!” crap. That shit demotivates. No one likes to be losing. That’s why Republicans create an alternate reality where all news is fake and the polls are fake and all bad news is fake. Because if they looked at reality and saw how f’d they were, they’d call it a day and head home to do whatever it is conservatives do…

In a presidential race that’s stabilized,  mobilizing voters could make the difference between a narrow win (which Trump and Republicans would surely exploit) and a landslide. If the latter doesn’t motivate Democrats, they haven’t been paying attention.

Because none of the recent revelations about Trump tell us anything new, while his supporters have been inoculated against the truth, this is the steadiest presidential race on record, as Harry Enten recently pointed out. The only way Trump can win is by cheating…big time.