Hillary Clinton beat Donald Trump in Minnesota by only 1.5 points in the 2016 election. That is why, as Trump struggles in the Rust Belt, his campaign has consistently targeted the “land of 10,000 lakes” as a possible flip in 2020.

On Friday, both presidential candidates will visit the state and the location of their stops is instructive in understanding their strategies in Minnesota. Neither Trump nor Biden are targeting the Twin Cities Metro area, which encompasses over 50 percent of the state’s population, because the outcome there is pretty much a foregone conclusion. 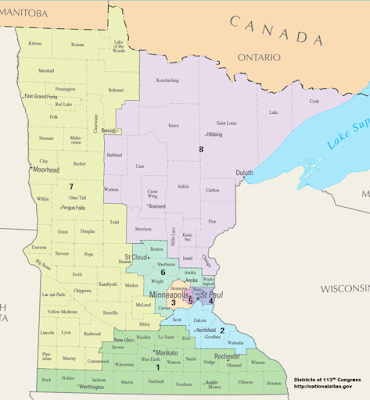 I doubt that most Americans have ever heard of Bemidji, a town of about 14,000 that is nestled next to the headwaters of the Mississippi River and is perhaps best known as the birthplace of Paul Bunyan. Of course, the name of the town comes from Native Americans, who populated the area long before white settlers arrived. Bemidji is now surrounded by three reservations: Red Lake, White Earth, and Leech Lake.

As you can see from the map, however, the 7th congressional district covers almost all of the western third of the state, a heavily rural area that Trump won in 2016 by over 30 points. So true to form, Trump is going to the part of the state where his support is already the strongest.

On the other hand, Biden will visit Duluth, a solidly blue city, which is located in a district that Trump won by 15 points and includes what is often referred to as the “Iron Range,” due to its long history as a mining area. For decades now, that industry has been in distress, which is where Trump’s so-called “populist” message resonates. When Republicans tout their success in the 7th district, that is the message they highlight.

But the 7th district is also home to the area known as the North Shore of Lake Superior and the Boundary Waters Canoe Area Wilderness. While the North Shore happens to be my favorite get-away destination in the state, it might surprise you to know that the Boundary Waters is the most visited wilderness area in America, encompassing more than a thousand lakes and 1,200 miles of canoe routes. The Trump administration has opened up the area to mining interests that could threaten its pristine nature.

That puts the 7th congressional district in the midst of a major tug-of-war between the extraction industry and the recreation industry—something that has also been gripping the Mountain West region, as Ryan Cooper wrote about in the Washington Monthly back in 2014.

It is true that there are many jobs to be had in the extractive industry…And it should be noted that these jobs are of a kind that is vanishingly rare these days: they require a high school education or less, and though they are often dangerous, they pay well enough to support a family.

But the economic benefits of an extraction economy are not as one-sided as the extractive industries and their allies would have you believe. There is a lot of money in the recreation economy as well—and it’s much more sustainable over a long period of time. While the extractive industries tend to follow a boom-and-bust cycle, the recreation industry is more consistently reliable. Its booms aren’t as dramatic, but neither are its busts.

Outsiders are able to grasp the importance of the loss of the jobs in the extractive industry that have plagued the Iron Range in Minnesota. But it is important to keep in mind that almost everyone in the state—including many of those miners—consider the Boundary Waters area to be almost sacred. The fact is that, if you live in Minnesota and don’t hunt, fish or boat, you risk being an outcast. Even the Mesabi Iron Range, the most active mining area, sells itself primarily as a recreational destination.

Those are some of the issues at play in northern Minnesota. Trump is going to Bemidji because his campaign strategy has always been to make an appeal to his base. Biden, who currently leads in the state by almost nine points, is shoring up the fact that he has traditionally had strong support from the Iron Range, even as it began to evaporate for other Democrats. He’ll lend that support to Senate candidate Tina Smith and Quinn Nystrom, the Democrat who has a shot at flipping the 8th district back to blue.