So far, the big news from the 2020 election is turnout. As of Tuesday, over 67 million people have already voted. Given the pandemic, early voting might not be surprising. Millions of voters want to avoid the health risk of crowded polling stations. But as CNN reporter Harry Enten noted, polls have found this to be the steadiest presidential race on record. Most voters made up their minds a long time ago. There’s no reason to wait to cast a ballot.

Pundits will try to suss out what this early vote tells us. But the truth is, not much. Knowing how many people have voted doesn’t tell us how they voted. Even data from the few states that report party registration offers few clues. Voters don’t tend to change their registration, even when they change allegiances.

If most early votes come from Democrats, we know that most Republicans plan to wait until election day to vote. Both sides have sold this election as one of the most important in this country’s history—and rightly so. Commitment to vote is high all over the country. So we can expect a surge from Republicans next week.

With all of those caveats, there is some important information we can glean from early voting. Trump’s attempt to stir up an October surprise about Joe Biden and his son was not only ineffective, it probably came too late, given the number of people who had already voted by the time the bogus charges landed. That goes for anything the Republicans might try to pull this last week.

Some Democrats have feared a repeat of  FBI Director James Comey’s famed announcement about Hillary Clinton’s emails 11 days before the 2016 election, which led to Clinton’s lead cratering and Trump’s support surging—especially in the Rust Belt states that he went on to win. With the steadiest presidential election in our history already underway, we’re not going to see a repeat of that.

One of the encouraging pieces of news from the early vote is that young people, who have traditionally waited until the last minute to vote, are casting their ballots early. According to data compiled by TargetSmart, an industry leader in political data and its applications, the 18-29-year-old share of the early vote is up 31% from 2016. They predict that the youth vote could match or even exceed their turnout in the 2008 election, the second-largest youth voter turnout in American history.

The big news about early voting, however, is coming out of Texas, where almost 8 million voters have already cast their ballots. Forecasters now predict that 12 million votes could be cast in a state that saw just over 8.5 million in 2016, calling all polls in that state into question.

When it comes to youth voting in 2020, Texas leads the nation. According to Tufts University, 750,000 voters under the age of 30 have already gone to the polls in Texas (compared to just over 100,000 by this time in 2016).  In a poll recently released by the Dallas Morning News and the University of Texas at Tyler, 18-24-year-olds in Texas favor the former vice president by 63 points (78-15). 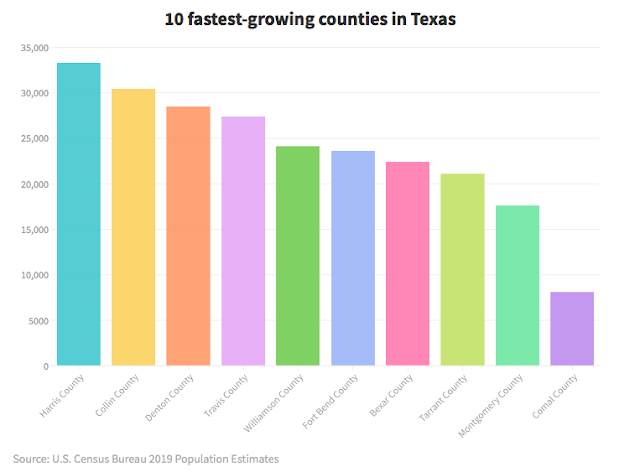 The surge in early votes from counties with soaring populations is bad news for Republicans. Here’s why: Following the 2018 midterms, researchers Richard Murray and Renee Cross from the University of Houston explained that a political fault line had developed between three metro areas (Houston, Austin, and Dallas-Ft. Worth) and the rest of the state. They calculated that in 1980, the 27 counties in the metropolitan areas cast about 55% of the state’s votes. By the 2018 election, that number had soared to 69%. Conversely, in the state’s 199 non-urban counties, which have become the foundation of the Republican Party, they’d fallen from about 37% of the vote in 1980 to just over 23% in 2018.

From the above chart, note that Collin—a historically Republican stronghold northeast of Dallas—is the second-fastest-growing county in Texas. That provides some context for this tweet from a former GOP consultant.

24.1% of Collin County voters have no voting history…. that is a scary scary number. #txlege

While some of that 24 percent may represent long-time residents who have simply decided to go to the polls for the first time, the majority are probably new to the county, which is why they don’t have a voting history.

Texas Republicans can’t afford to lose any more ground, which is why the surge in early votes from the suburban metro districts has prompted a last-minute visit to the state from the Democratic vice presidential nominee, Senator Kamala Harris. It is unlikely that the Biden-Harris team would need Texas to reach 270 electoral votes, but a win in the Lone Star state would ensure a landslide.