In 2016, Donald Trump penetrated the so-called “blue wall” in Pennsylvania, Michigan, and Wisconsin with a win by the narrowest of margins. Much of the coverage of the 2020 presidential race has focused on whether Biden can reclaim the Rust Belt.

Meanwhile, Democrats have been making gains in the Sun Belt, running competitively in Arizona, North Carolina, Georgia and even Texas. Dave Wasserman of the Cook Political Report recently tweeted that the biggest mystery at the moment is whether the Sun Belt “red wall” will crumble on Tuesday.

Fox News political reporter Chris Stirewalt thinks he has the answer for how to maintain that red wall.

Even as Trump struggles in the Upper Midwest states that powered his 2016 victory, southern-tier states that looked out of reach have become more competitive thanks in part to increasing support from Hispanic voters.

Stirewalt says that some southern states appeared to be out of reach for a Republican president running for reelection, which is a rather astounding admission. He goes on to suggest that Hispanic voters may have made those states more competitive. That is why Trump has been engaging in “identity politics”—making a pitch to Hispanic voters in Florida on Sunday.

Current conventional wisdom says that Trump has actually increased his support among Hispanic voters—primarily men—since 2016. In September, CNN’s Harry Enten analyzed 20 national polls and found that Biden’s lead among Hispanics was only 28 percent, compared to Clinton’s lead of 37 in the final pre-election polls.

So what happens when a reputable polling firm partners with a Spanish-language TV network such as Telemundo to poll Hispanic voters? That’s what the NBC News/Wall Street Journal poll did recently. Unlike the national polls reviewed by Enten, they found that Biden leads Trump by 33 points (62-29).

Last week Univision released a poll of Hispanic voters in Texas, Florida, Arizona, and Pennsylvania. Here’s what they found:

Other than in Florida, Biden’s lead is about 40 points. When it comes to the Sunshine State, the margins are a bit more narrow. Univision found that Trump’s scare tactics about Biden being a closet socialist have given the president a lead of 10 points among Floridians from Cuba, Colombia, and Venezuela. But even before Hurricane Maria in 2017, Florida was seeing waves of Puerto Ricans moving into the state, rivaling their numbers in New York. Univision found that, among Floridians from Puerto Rico, Biden leads 63-29.

The numbers from Univision point to the fallacy of making generalizations about Hispanic voters, whose origins range from those who lived in the Southwest prior to this country’s founding to more recent residents from the U.S. territory of Puerto Rico. That diversity is captured by this data from Pew Research. 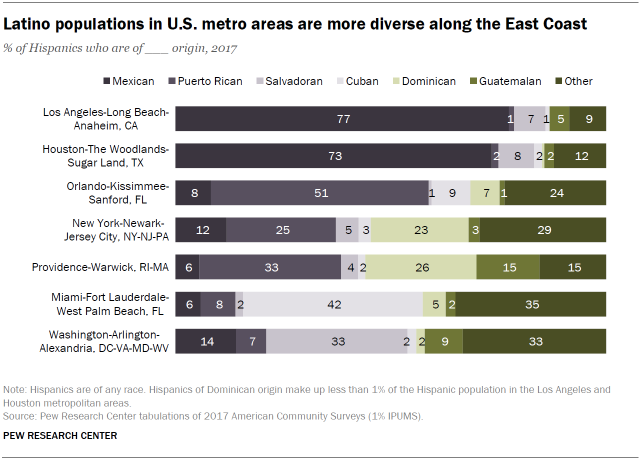 Based on polling from Hispanic organizations, it appears that Trump has made some inroads with Cuban-Americans, who dominate the Miami area of Florida. But that hasn’t translated into increased support from Hispanics across the country.