This past July, presidential candidates Hillary Clinton and Donald Trump took the stage to accept their parties’ nominations for president and articulate their visions for America. By all accounts, neither speech towed the traditional party line. Instead of espousing small government, the beating heart of American conservatism, Trump championed the power of the presidency, with himself as savior in chief. “I alone can fix it,” he declared. “I will restore law and order. . . . I have made billions of dollars in business making deals—now I am going to make our country rich again. . . . I am your voice.” 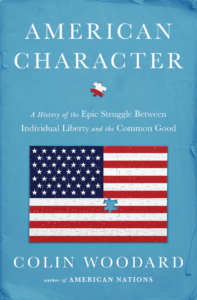 American Character:
A History of the Epic Struggle Between Individual Liberty and the Common Good
by Colin Woodard
Viking, 320 pp.

In contrast, the Democratic convention sounded downright Republican. “Over four flag-waving days in Philadelphia, Democrats stole the Republicans’ mojo,” wrote CNN’s Nicole Gaouette. Clinton’s theme was American unity: our exceptional patriotism, greatness, and strength. “Powerful forces are threatening to pull us apart,” she warned. “We have to decide whether we all will work together so we all can rise together. Our country’s motto is e pluribus unum: out of many, we are one.”

But pan out a couple of centuries—or even just a few decades—and you quickly realize that Trump’s expression of oligarchic individualism and Clinton’s mighty collective are precisely the competing facets of American identity that have always divided us. This argument is at the center of a new book, American Character: A History of the Epic Struggle Between Individual Liberty and the Common Good, by the journalist and historian Colin Woodard. Early on, he asks, “When individual liberty and the common good come into conflict, with which principle will you side?”

Don’t be too quick to answer. Woodard reminds us that the two philosophies have been trumpeted and twisted for both good and evil, and neither is the battle cry of any single faction. Both gay rights’ advocates and gun enthusiasts argue for the individual’s right to self-determine. On the flip side, proponents of “traditional” marriage and gun control both believe their positions strengthen the collective. So how do we reconcile these competing facets of American identity? How do we possibly come together? This is the question Woodard seeks to answer.

American Character isn’t a long book, but it is sweeping in its scope. Woodard’s exploration of individualism and collectivism begins with the very origins of human civilization over a million years ago. He touches on John Locke’s anti-monarchical influence over the British aristocracy in the seventeenth century, before exploring the divisions between Thomas Jefferson’s libertarianism and Alexander Hamilton’s Federalism. In a chapter that synopsizes his excellent 2011 book American Nations, he explains how these competing philosophies were adopted and rejected on a regional basis. He then presents the rise of unchecked laissez-faire individualism and the backlash of Teddy Roosevelt’s Progressive Movement. He moves us through the vast expansion of government under Franklin D. Roosevelt, the refreshingly sane national liberal policies of Dwight Eisenhower and John F. Kennedy, and the eventual hijacking of these policies by Ronald Reagan, Newt Gingrich, and the Tea Party.

Many of Woodard’s chapters read like chronological surveys: the administrations, national conflicts, and policy debates fly by at ferocious speeds. It’s a rough ride, especially with such frequent toggling back and forth between examples of individualism, collectivism, and their economic and social consequences. At times, we are desperate for Woodard to slow the bus down, get on the intercom, and take up an active role as tour guide. Unfortunately, we don’t hear much from him until the end of the trip. This lack of authorial intervention means that readers will likely impose their own framework and analysis on the history presented here.

Trump’s expression of oligarchic individualism and Clinton’s mighty collective are precisely the competing facets of American identity that have always divided us.

That’s not inherently a problem. Readers should be encouraged to think for themselves now and then. But because we’re in the middle of a madcap presidential election, many of the details in American Character feel supercharged with political subtext. When Woodard praises New York’s seventeenth-century forebears for establishing an environment with a “profound tolerance for diversity,” and calls it a “refuge for those persecuted by other regional cultures,” it’s impossible for liberal-minded readers not to seethe with frustration over today’s immigration debates and Trump’s anti-Muslim rhetoric. Just as easily, anyone who championed Ted Cruz’s “New York values” statement last April is likely to feel smugly self-righteous over Woodard’s comment that the region has never been “particularly democratic or concerned with great moral questions.”

Similarly, it is near impossible to read about Andrew Jackson’s attack on government bureaucracy and his mass firing of civil servants without immediately thinking of Trump’s populist anti-intellectualism. (Depending on where you live and your own economic situation, this is something to either celebrate or decry.) And, of course, when Woodard points out that “in 1890, the richest 1 percent of Americans had the same combined income as the bottom 50 percent and owned more property than the other 99 percent,” it’s impossible not to think about the Bernie Bros and the terrible income inequality that is wrenching our country apart.

Even Woodard’s discussion of evolutionary biology feels political. “Far from being naturally solitary, humans have always existed in a social state,” he writes in the first chapter, titled “Maintaining Freedom.” He continues, “Our evolutionary ancestors, Homo erectus, were using fire a million years ago, a game-changing innovation that led them to live in group campsites [and] share tasks, responsibilities, and resources.” Like any responsible historian, Woodard is simply trying to contextualize his argument. And yet given the virulence of today’s small-government evangelists and Ayn Rand individualists, it’s difficult not to wonder: Is this how far back we need to go to make a case for the collective? To fire?

Well, yes. The best chapter in American Character is called “Two Paths to Tyranny.” It’s here, through a discussion of the oligarchic slaveholding South and communist Europe, that Woodard explores how individualism and collectivism have been taken to dangerous extremes. The chapter is unusual for a work of American history: half of it takes place abroad, detailing life behind the Iron Curtain, with its armed police, banned typewriters, and bugged classrooms. But these examples help underscore America’s historic fear of the collective and the “radical counterreaction” of ardent individualists, which eventually led to the creation of the John Birch Society, the Heritage Foundation, and the Tea Party.

Although not explicitly discussed in these pages, Woodard’s chapter on extremes also helps explain the rise of Donald Trump. So much of the anger on display at Trump rallies stems from a combined fear and resentment of immigrants and minorities. To many working-class Americans, these are massive, faceless groups of people—collectives, if you will—who pose a direct threat to the individual’s freedom and happiness. It’s a bigoted, misguided point of view, but it too stems from the collective-individualist divide. The Donald’s detractors see him as a symbol of extreme selfishness in the vein of the pre-Progressive oligarchs. His working-class supporters (most of whom have directly benefited from the protections afforded by Progressive reformers) see him as a symbol of self-determination. To them, he’s a powerful individual who does not bow to group will—including that of the party that nominated him.

So what’s the solution? Woodard ends his book with an appeal to fairness. “In the early twenty-first century, fairness must be reasserted as the central issue of our political discourse and made the central value of a new political coalition,” he writes in the final chapter, “A Lasting Union.” This compromise, he says, would champion “individual achievement and investments in our shared institutions and resources.” It would “protect the competitiveness and security of the market and the health of consumers, workers, and the environment.” And it would also reform the tax code so that “the rich and ultra-rich pay a larger share of the burden of maintaining a civilization that has served them so well.”

In theory, this sounds like the perfect solution. The problem is that it requires not simply a tremendous degree of compromise to achieve but also a unified definition of what is fair. All along, Woodard has argued that in this country, there are no common definitions. To one group, individualism means economic deregulation; to another it means upholding civil rights. To one group, supporting the collective means strengthening social services; to another it means strengthening the military. And so as much as our history has been a debate between individual liberty and the common good, it has also been a struggle between factions who champion both philosophies as uniquely American—and uniquely their own.

Jennifer Miller is the author of two novels, The Year of the Gadfly and The Heart You Carry Home. Her journalism can be found in the New York Times, the Washington Post, and Slate. Find her at byjennifermiller.com.