In April 2016, Pope Francis granted priests permission to allow divorced or re-married parishioners to begin receiving communion. Hopeful progressives who thought the pope might recognize gay marriage or allow women to join the priesthood were doubtless disappointed at this comparatively meager gain. But history advances in small steps, prior to the occasional quantum leap. To the anxious religious liberal, Mark A. Smith, professor of political science and adjunct professor of comparative religion at the University of Washington, comes bearing good news—if one is willing to accept the argument underpinning his message. While a religious person could agree with Smith’s assertions about the inevitability of progress, she might wince at his claim that religion drags along behind secular culture—like a little brother stiffly bundled into a snowsuit, hurrying to keep up—with no progressive impulse of its own. 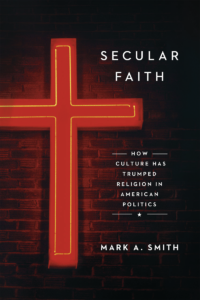 Smith’s Secular Faith: How Culture Has Trumped Religion in American Politics is an optimistic book, arguing that progressive secular culture is destined to erode conservative religious resistance. Smith bases his thesis on a historical examination of five issues—slavery, divorce, homosexuality, abortion, and women’s rights. He is more successful in substantiating his argument in certain areas (divorce and homosexuality) than in others (slavery and abortion).

While not convincing in its larger assessment, Secular Faith provides a font of sociological data—its greatest strength. We learn details about changing attitudes toward marriage, divorce, and homosexuality, illustrated through graphs. The book gives broadly useful summaries of how competing schools of Christian thought have interpreted key sections of the Bible: conservatives generally have explained with stark literalism, while liberals have evoked the subtleties of historical context, new approaches to translation, and the overall spirit of the text.

Smith first considers slavery, outlining crucial Bible passages used by southern slaveholders and Christian abolitionists to defend their respective positions. The southerner could cite the fact that slaveholding was permitted throughout the Old and New Testaments, while the abolitionist might appeal to the moral gist of Jesus’ teachings, the implications of the Golden Rule.

Smith begins by trying to explain the birth of the abolitionist movement and quickly runs into trouble. He credits the American Revolution with its secular ideals of liberty and equality. “As the struggle for independence exposed the contradiction between republican ideals and the reality of slavery,” writes Smith, “Christian groups joined the growing movement for emancipation.” There is something to be said for this, given that antislavery sentiment didn’t heat up until after independence. However, it’s not enough to simply say “Secular culture did it”; you have to prove it. If the revolution explains emancipation, why did Great Britain outlaw slavery in 1833, thirty years before the United States abolished it? The answer seems to be rooted in the English civil war, which unleashed liberal religious ideas that impacted both the colonies and the motherland. David Brion Davis’s monumental 1966 Pulitzer Prize–winning study, The Problem of Slavery in Western Culture, provides an excellent case for this perspective—which Smith is either unfamiliar with, or simply ignores.

Hence, slavery seems to be the least successful test case for Smith’s thesis—unfortunate, given that this chapter opens the book, setting the tone for what follows. His thesis finds greater success when we turn to gender and sexual politics. For instance, there isn’t much of a biblical case for divorce, and nineteenth-century churches widely opposed the practice. Jesus says in the Gospel of Luke, “Anyone who divorces his wife and marries another woman commits adultery, and the man who marries a divorced woman commits adultery.” Yet as divorce became more acceptable, churches learned to go with the secular flow. The Enlightenment changed the understanding of marriage from a matter of financial and familial advantage to a matter of love—of finding your soul mate.

Smith’s thesis holds partly true when considering women’s rights. The Bible, unfortunately, provides little ammunition for the cause of women’s liberation (beyond the Gospels’ basic moral ideas, if you squint at them), yet the churches have grown much more accepting of women’s rights as secular culture has surged onward. Even here, however, Smith makes a glancing admission of religious influence, while sidestepping the question of its overall impact. He observes of the early Quaker feminists Sarah Grimké and Lucretia Mott, “Bypassing the need for any centralized authority, Quakers did not even have ministers and instead allowed the Holy Spirit to lead each believer to God’s truth. By privileging the ‘inward light’ over tradition or a church hierarchy, Quakers found it easier than other Christians to read the Bible in a new way.”

While recognizing this feature of Quaker belief, Smith still grips onto his central thesis, white knuckled—he will ride this roller-coaster through every successive loop-de-loop without, to his credit, losing his cookies. His admirably tenacious commitment aside, he thinks that a literalist’s faith in the Bible’s inerrant accuracy is a more concrete form of religiosity than faith in the “inward light.” But is it? The notion that one’s arguments need to be grounded in scriptural specifics in order to be truly “religious” is, itself, rooted in Fundamentalism. A Quaker might argue that the idea of an “inward light” is more radically religious, given the degree of intimacy it assumes between the believer and the Deity.

Smith’s study of gay rights surprisingly demonstrates that mainline Protestant denominations like the United Church of Christ and the United Presbyterian Church helped lead the charge for the repeal of sodomy laws in the 1960s. Albeit, at this time, they still viewed homosexuality as a mental disorder requiring treatment—but so did the American Psychological Association. Mainline Protestantism is currently shrinking, and might seem watered down to many present-day evangelicals, but we routinely underestimate its vital historical importance to social reform in America. A fiery social conscience lurks behind the soothing accents and wide array of “hot dish” available at your average Minnesotan Lutheran picnic. The fact that so many mainline denominations were ahead of the curve on homosexuality testifies to this fact.

Abortion provides the most unusual case in Smith’s book: he confesses that, whereas attitudes have changed toward women’s liberation and gay rights, the American populace remains as divided on abortion as on the taste of cilantro. Surprisingly, Smith points out that many historically venerable theologians didn’t have a major problem with abortion if it happened before “quickening” (the sensation of the fetus moving in the womb). The movement to criminalize abortion in America was actually led by mid-nineteenth-century doctors, after advances in embryology revealed that quickening didn’t represent a major transformation in the process of fetal development. Ironically, Smith says, this apparently secular movement spurred the creation of abortion laws, while many churches remained indifferent.

But, again, one might greet this with some skepticism: how secular were these doctors, really? Perhaps they considered their discoveries about embryology in light of Christian teachings on the soul, concluding that ensoulment happened at a point in pregnancy earlier than quickening? Since Smith doesn’t investigate the way ideas spread at a more personal level, we don’t know. A touch of Ralph Waldo Emerson’s injunction—“There is no history, only biography”—might have shone light here.

Smith’s statistics and records of evolving denominational positions mark the tides of history, but they don’t let us into the intellectual battleground behind those changes. We understand the terms of these conflicts, but we don’t get to learn much about the participants in the battle and their conception of why they were fighting—we don’t see Braveheart painted blue and swinging a mace, if you will. The notion that secular ideas are always stronger than religious ideals may appeal to some, yet it seems far from true. While the data Smith collects can certainly prove useful to other scholars, serving as a valuable compendium, I couldn’t surmount the sense that he was short-changing religious people and their ideas throughout his study.

Marx once called religion “the heart of a heartless world”—implying that the true engine of social change must always be secular and driven by economics. Yet the history of abolition provided in David Brion Davis’s book demolishes this notion, as does the evidence of more recent history: Gandhi used spiritual asceticism as a powerful force in the drive for Indian independence, and, to cite a darker example, the Iranian revolution made a country embrace theocracy and retreat from secularism. Ideas cannot be banished from history, and the agency of the humans who bear those ideas should not be underestimated. After all, as that old antireligious scourge Friedrich Nietzsche once put it, “The greatest ideas are the greatest events.”

Samuel Buntz is a freelance writer living in West Hartford, Connecticut. His work has appeared in PopMatters, Fare Forward, and the Washington Monthly.