So I feel comfortable in generalizing.

There is one kind of Catholic who’s like me. I don’t practice, and I don’t believe, but the way I live my life is surprisingly and even annoyingly similar to the codes of conduct we learned from he priests and nuns.

There is another kind, the faithful, people who go to church regularly and who pray devoutly and who care very deeply about their faith. It gives them solace and strength and comfort. They are very serious Catholics, but their faith is between themselves and their God, and I admire them and respect them. Some of the people I love and admire most in the world are Catholic in this way.

And then there is the kind of Catholic like Rick Santorum is, the guy we used to describe, and not with admiration, as more Catholic than the Pope.

I have know this type of person my whole life, and have seen in the living rooms of friends and family members, in class rooms and cafeterias and on campus. They are not intelligent enough to try to make their way through the mysteries of faith–its challenges and contradictions and painful choices–and so they do the oxymoronic things, and replace faith with certitude. They don’t need to think, because the church has supplied them with all the answers. And they don’t sin, sometimes because they have discipline, but often enough, because of their certitude that the things they do and believe simply cannot be sinful (ask a pro-lifer how he can countenance capital punishment.) 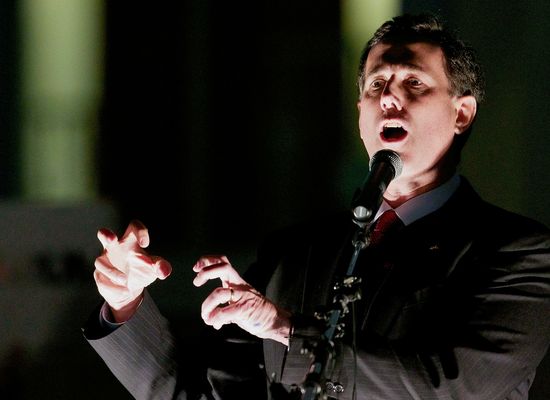 But they are quick to see the shortcomings of others, and to condemn it, taking satisfaction in their own purity, and in making sure, more in a pleased-with-themselves sadness than in anger, that the sinner is quite aware that he or she has broken God’s law.

I have seen this Santorum-like smugness all my life, and it makes me sick.

The good news is that I think it makes most other people sick as well.

This is Santorum on contraception: “One of the things I will talk about that no president has talked about before is, I think, the dangers of contraception in this country, the whole sexual libertine idea. Many in the Christian faith have said, ‘Well, that’s okay. Contraception’s okay.’ It’s not okay because it’s a license to do things in the sexual realm that is counter to how things are supposed to be.” How things are supposed to be? Says who?

Here is Santorum on being a Christian? “[I]s there such thing as a sincere liberal Christian, which says that we basically take this document and re-write it ourselves? Is that really Christian? That’s a bigger question for me. And the answer is, no, it’s not. I don’t think there is such a thing. To take what is plainly written and say that I don’t agree with that, therefore, I don’t have to pay attention to it, means you’re not what you say you are. You’re a liberal something, but you’re not a Christian. That’s sort of how I look at it.” I’ll respond with one name, the most significant American of the 20th century, the liberal Christian Martin Luther King Jr.

Last week, Bill Keller of the Times went on Morning Joe and said ““Remember earlier in the campaign when Newt Gingrich was worrying everybody about Shariah law — you know — the Muslims were going to impose Shariah law in America? Sometimes, Santorum sounds like he’s creeping up on a kind of Christian version of Shariah law.”

Good point–only Santorum is even more self-righteous than the mullahs. I don’t think Santorum wants people to stop behaving and believing differently than he does. I don’t think he’d know what to do with himself. I think he likes having people out there–maybe even a majority of people–to whom he can feel sorry for and superior to.