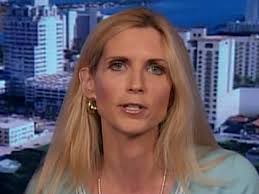 College Republicans invited conservative pundit Ann Coulter (right) to speak at New York’s Fordham University. And then the club uninvited her. The revocation apparently happened after the campus group received an angry email from the college president, Joseph McShane in which explained “to say that I am disappointed with the judgment and maturity of the College Republicans…. would be a tremendous understatement.” He went on to say,

There are many people who can speak to the conservative point of view with integrity and conviction, but Ms. Coulter is not among them. Her rhetoric is often hateful and needlessly provocative—more heat than light—and her message is aimed squarely at the darker side of our nature.”

As members of a Jesuit institution, we are called upon to deal with one another with civility and compassion, not to sling mud and impugn the motives of those with whom we disagree or to engage in racial or social stereotyping. In the wake of several bias incidents last spring, I told the University community that I hold out great contempt for anyone who would intentionally inflict pain on another human being because of their race, gender, sexual orientation, or creed.

He declined to say what specifically he objected to about Coulter, though it probably has something to do with referring to President Obama as a “retard,” saying that Bill Clinton was a “very good rapist,” or explaining in one book she wrote that “it would be a much better country if women did not vote. That is simply a fact.”

Still, Ann Coulter isn’t a scholar; she’s an entertainer. Coulter is very popular among college-age conservatives. Indeed, controversial and very entertaining pundits like Coulter are precisely the sorts of people College Republicans are supposed to be inviting to campus.

McShane, for his part, didn’t forbid Coulter from coming to campus; he just expressed his disappointment (via an all-campus email) with the College Republicans.

It was the club that ended up rescinding its offer to Coulter, explaining that it’s now discovered that it is in “disagreement with certain comments by Ms. Coulter,”

We hope the University community will forgive the College Republicans for our error and continue to allow us to serve as its main voice of the sensible, compassionate and conservative political movement that we strive to be. We fell short of that standard this time, and we offer our sincere apologies.

I’m not great fan of Coulter, but that’s pretty cowardly.

She’s not a war criminal, after all. She’s just a woman who sometimes says offensive things. (One wonders how Sarah Silverman would be received at Fordham.) Speakers hired by student groups need not all be respectful, tasteful, uncontroversial figures. [Image via]

UPDATE: McShane sent the email to the entire campus, not just to the College Republicans.