If you want to understand American gender relations in the 1960s, skip “Mad Men” and tune into classic “Star Trek.” I recently re-watched “The Enemy Within” with the kids and it was an eye-opener.

A brief synopsis: due to a transporter malfunction, Kirk is split into two identical beings, a “good” Kirk who has the original’s intellect and moral code, and an “evil” Kirk who has the original’s lust and strength. On the surface, the episode is a nice discourse on leadership; good Kirk appears to be the ideal captain, but he can’t make any command decisions without his evil half. And it’s also a great example of William Shatner’s genius as an actor. He makes the most of his evil side using just eyeliner and a few camera zooms.

But damn, the gender dynamics! Evil Kirk has a fascinating trip through the Enterprise. He first visits Dr. McCoy’s office and demands brandy. (Why is the ship’s doctor the source of liquor?) Then, good and boozed up, he pays a visit to the quarters of Yeoman Rand, whom he tries to rape. While she scratches his face, the rape is only really averted when Crewman Fisher walks by, sees what’s going on, and tries to summon help. Evil Kirk disables Fisher and escapes the scene. 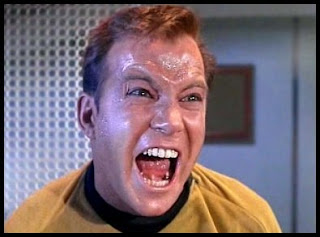 Later, good Kirk visits Rand and pleads his innocence, but Rand sticks to her story. To his credit, Crewman Fisher stops in and backs up Rand’s story, knowing full well that he’s accusing the captain of rape and doing so at risk to his own career.

Eventually, Scotty and Spock are able to repair the transporter and re-merge the two Kirks into the moral-but-decisive leader they all know and love. So then Kirk has to face Yeoman Rand, who has occasional business on the bridge. This should theoretically cause considerable discomfort to both of them, as she has to work with her would-be rapist and he can now see his past actions through the eyes of someone with a conscience. But the only discomfort appears to be from Rand, who seems to apologize to Kirk in the final scene, and he dismisses her with a simple smiling “thank you.” Then Spock, out of nowhere, says with a smirk, “The imposter had some interesting qualities. Wouldn’t you say, Yeoman?” Because apparently Vulcans have no emotions other than contempt for victims of sexual violence.

And keep in mind that “Star Trek” was one of the more socially liberal programs of its day, although one could probably judge from the uniforms that women’s equality didn’t have much of place in the creators’ hearts just yet. Still, the whole I-only-raped-you-when-I-didn’t-have-a-conscience-but-now-that-I-do-bygones! argument is pretty impressive.