Dan Munro has a post up at Forbes: The Year In Healthcare Charts. Though they’re all worth a look, this is the one that dilated my pupils: 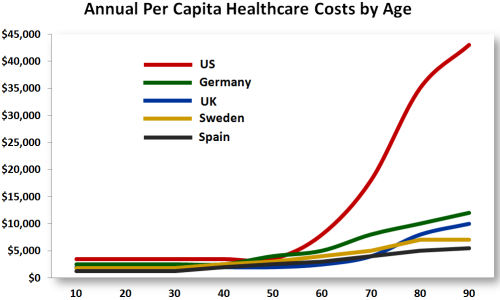 What happens to Americans when they turn 55? Don’t blame Medicare. It doesn’t kick in until age 65. My guess is that at 55+, people tend to initiate health care episodes (visit doctors) more. You see evidence of that in all countries depicted. But, in the U.S. much more so than elsewhere, once you check in, more stuff is done to you or for you. More tests. More return visits. More intensive end of life care. Let’s face it, more unnecessary procedures. I call it “clinical capture.”

Yes, perhaps Americans are also a bit sicker by age 55 (e.g., more diabetes). But, wow, it really is hard to explain why they should cost as much more as depicted, relative to residents of other countries, at 55+ and yet nearly the same below that age. This chart really shocks me.