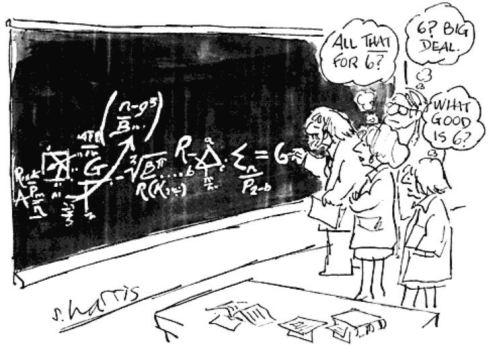 E. O. Wilson has an interesting brief essay (excerpted from a new book entitled Letters to a Young Scientist) on the role of mathematics and mathematical expertise in science. “Most of the stereotypical photographs of scientists studying rows of equations on a blackboard,” he notes, “are instructors explaining discoveries already made.

Real progress comes in the field writing notes, at the office amid a litter of doodled paper, in the hallway struggling to explain something to a friend, or eating lunch alone. . . . Ideas in science emerge most readily when some part of the world is studied for its own sake. They follow from thorough, well-organized knowledge of all that is known or can be imagined of real entities and processes within that fragment of existence.

Wilson acknowledges that “When something new is encountered, the follow-up steps usually require mathematical and statistical methods to move the analysis forward.” At that point, he suggests finding a collaborator. But technical expertise in itself is of little avail: ”The annals of theoretical biology are clogged with mathematical models that either can be safely ignored or, when tested, fail. Possibly no more than 10% have any lasting value. Only those linked solidly to knowledge of real living systems have much chance of being used.”

Paul Krugman concurs, but with a caveat:

[A]t least in the areas I work in, you do need some mathematical intuition, even if you don’t necessarily need to know a lot of formal theorems. . . . [T]he intuition is crucial, and not just for writing academic papers. If you’re going to talk about economics at all, you need some sense of how magnitudes play off against each other, which is the only way to have a chance of seeing how the pieces fit together. . . . [M]aybe the thing to say is that higher math isn’t usually essential; arithmetic is.

My own work has become rather less mathematical over the course of my career. When people ask why, I usually say that as I have come to learn more about politics, the “sophisticated” wrinkles have seemed to distract more than they added. Krugman’s comment seems to me to help illuminate why that might be the case. “Seeing how the pieces fit together” requires “some sense of how magnitudes play off against each other.” But, paradoxically, ”higher math” can get in the way of “mathematical intuition” about magnitudes. Formal theory is often couched in purely qualitative terms: under such and such conditions, more X should produce more Y. And quantitative analysis—which ought to focus squarely on magnitudes—is less likely to do so the more it is justified and valued on technical rather than substantive grounds.

I recently spent some time doing an informal meta-analysis of studies of the impact of campaign advertising. At the heart of that literature is a pretty simple question: how much does one more ad contribute to the sponsoring candidate’s vote share? Alas, most of the studies I reviewed provided no intelligible answer to that question; and the correlation between methodological “sophistication” (logarithmic transformations, multinomial logits, fixed effects, distributed lag models) and intelligibility was decidedly negative. The authors of these studies rarely seemed to know or care what their results implied about the magnitude of the effect, as long as those results could be billed as “statistically significant.” Competing estimates differ (once their implications are unpacked) by orders of magnitude, with no indication from anyone that anything might be amiss. Of course, there is no reason why mathematically sophisticated analyses cannot be sensibly interpreted. Nevertheless, it seems clear that this is one corner of political science—and I believe there are many others—in which “higher math” is much less urgently needed than “arithmetic.”