Jeremy Johnson asks: “Do we have information yet about voting among whites based on income from the 2012 election?  Did lower-income whites in every state again vote more Democratic than upper-income whites?” 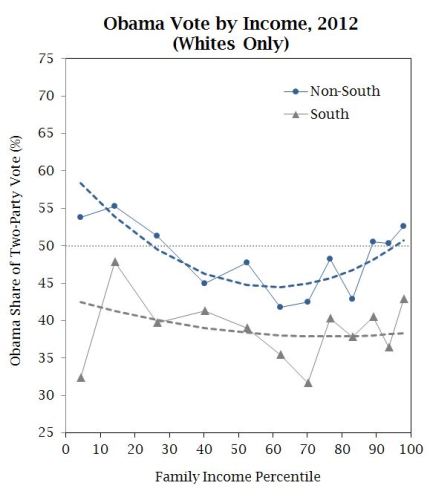 I don’t know about every state; but here is the picture for the Non-South and South, based on survey data from the 2012 Cooperative Campaign Analysis Project. The lowest income category is less than $10,000; the highest is $150,000 and up. The overall correlation between income and Democratic support is negative, but Obama’s voter share is higher in the top income groups than among the upper middle class. (That very low Obama share for the lowest income group in the South is based on 196 survey respondents; the other cell sizes range from 285 to 1420.)

When I was a kid, my parents bought the Encyclopedia Britannica. (For you youngsters in the audience, that was a big shelf of books containing all the good stuff that’s now on the internet.) One of the great features was that it came with a bunch of coupons you could mail in to get customized reports on any topic. (Looking back, it seems possible that we were the only subscribers in the world who were not submitting these as schoolwork.) Alas,  I can’t redeem every reader’s coupons—but today we’re here for you, Jeremy.