I have tried – hard – not to continue to talk about the few healthy young people likely to be adversely impacted by changing health insurance policy. I think the “plight of the bros” is a distraction. It’s finding the apocraphyl few people who are 25, without parents who will put them on a plan, have great jobs that pay them a good wage so they don’t get a subsidy (but those jobs can’t be good enough to give them insurance), be childless, be single, be male, be perfectly healthy, have no family history of illness, not smoke, not do drugs, be thin, and live in California.

Those few guys aren’t who health care reform is about. At least not to me. I’ll own that.

But Adrianna McIntyre has pulled me back in. Austin already posted on her piece, and even pulled a chart. I want to pull a different one. Take a look at this: 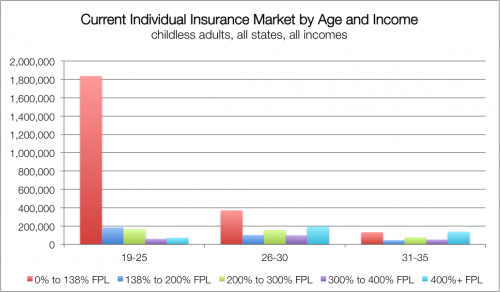 Weep for the bros, if you like, those “lucky duckies” who earn too much to qualify for subsidies. Me? I can’t believe how many of those who are 19-25 live in poverty. All of those red column young adults on the left side earn less than 138% of the poverty line. All of them would qualify for the Medicaid expansion. Yet many of them, possibly most of them, won’t get it because of all the states who are refusing the expansion.

I think they are who health care reform was about. I think it’s pretty horrific that next year a large chunk of them will continue to be uninsured. But I guess the tragedy du jour will remain the “rate shock” for the bros.