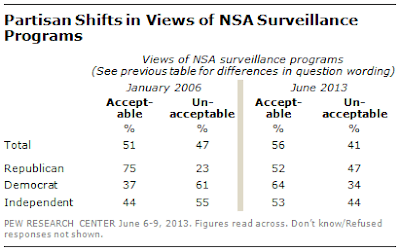 The above Pew poll, noting that Democrats are basically okay with NSA domestic surveillance under President Obama but were outraged by it under President Bush (and vice versa for Republicans), is getting a lot of attention lately. (See, for example, here and here.) The general interpretation is that partisans are basically hypocrites. Like studies showing that people’s evaluation of the economy tends to improve when their party controls the White House, we can see that people basically view the world through partisan glasses. What seem like iron-clad views on civil liberties are nothing more than political postures.

But is that the only way to interpret this? In my view, it’s hard for poll respondents to evaluate NSA surveillance, or any powerful government tool, without considering who’s in charge of it.

When people are asked what they think about the government having this power, they’re implicitly being asked what they think about President Obama having this power. Is it really hackish for people to be more comfortable with a governmental power if they know someone they more or less trust is going to be in charge of it? Is it hypocritical to think that police state tactics are necessary when someone who shares your values is deploying them but excessive when someone hostile to your values is deploying them? Democrats are basically saying, “Yes, this is potentially problematic, but we trust Obama to do it right,” and Republicans said the same thing about Bush.

It never really came to a vote, but when Batman developed the technology to use all of Gotham’s residents’ cell phones as a giant crime detection device, I’m sure residents as a whole would have preferred Lucius Fox running that device than, say, the Joker doing so, even if they saw the device itself as morally questionable.

I don’t know that partisans are being douchey here. It may just be that they’re casting judgment on the people running the show.