Fort Hood is the Army installation in Killeen, halfway between Austin and Waco. The base opened in January 1942, serving as a training center for soldiers joining artillery and anti-tank units. Today, it’s the Army’s largest active-duty armored post, a base where approximately 41,000 soldiers work.

It is also one of 10 functioning Army bases named for a Confederate general. There used to be many more. During World War I and World War II, the War Department opened a large number of new bases, many in the South, where the warmer weather permitted more time for training. Bases were customarily named after military heroes, and although ultimate responsibility for the choice rested with the War Department, civilian input was allowed and political pressure inevitable. 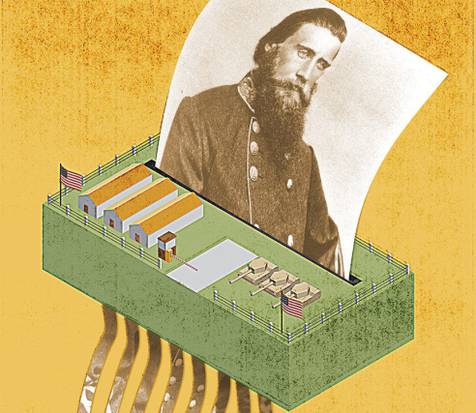 In the 1940s, sensitivities about the Civil War still ran high. Many people still had a personal connection with someone who had served in the war. There remained a need to bind the nation together more closely, and so no one really challenged the appropriateness of naming U.S. Army bases after generals who had led troops against the U.S. Army in battle. “We’re all Americans,” was the line.

Consequently, in Virginia, we still have Fort Lee, named for Robert E. Lee , a man universally admired for his personal integrity and military skills. Yet, as historian Ken Burns has noted, he was responsible for the deaths of more U.S. Army soldiers than Hitler and Tojo . Also in Virginia is Fort A.P. Hill , named for an officer whose peerless ferocity was increasingly undermined by the frequent periods of incapacitation he suffered from a syphilis infection; and Fort Pickett, named in honor of Gen. George Pickett , whose division was decimated at Gettysburg. Pickett was accused of war crimes for ordering the execution of 22 Union prisoners; his defense was that they had all previously deserted from the Confederate army. In the end, he was not charged.

In Georgia, there is Fort Benning and Fort Gordon. Henry Benning was a state Supreme Court justice who became one of Lee’s more effective subordinates. Prior to the war, this fervent secessionist inflamed fears of abolition, which he predicted would inevitably lead to black governors, juries, legislatures and more. “Is it to be supposed that the white race will stand for that?” Benning said in a speech in February 1861. “We will be overpowered, and our men will be compelled to wander like vagabonds all over the Earth, and as for our women, the horrors of their state we cannot contemplate in imagination.”

Like Benning, John B. Gordon was another of Lee’s most dependable commanders. Before the war, Gordon sought secession as the first step to creating a slaveholding empire. Speaking at Oglethorpe University in June 1860, Gordon told the students that if they resisted threats to their “constitutional liberty” — i.e. the right to own slaves — then “the day is not far distant when the Southern flag shall be omnipotent from the Gulf of Mexico to the coast of Delaware; when Cuba will be ours, when the Western breeze shall kiss our flag, as it floats in triumph from the gilded turret of Mexico’s capital; when the well-clad, well-fed Southern Christian slave shall beat his tambourine and banjo, amid the orange-bowered groves of Central America; and when a pro-slavery legislature shall meet in council at Montezuma.” After the war, he headed the Ku Klux Klan in Georgia. He “may not have condoned the violence employed by Klan members,” says his biographer Ralph Lowell Eckert, “but he did not question or oppose it when he felt it was justified.”

John Bell Hood was different from these men: not as good a general as Lee, but better than Pickett and Hill. He was certainly better than the irascible, incompetent Braxton Bragg (Fort Bragg, N.C.) and the indecisive, frequently disastrous Leonidas Polk (Fort Polk, La.), a bishop turned general who personally owned several hundred slaves.

Hood was not a fire-eating secessionist like Benning or Gordon, but he was quite clear-minded about the cause he had joined. (“Regardless of all other causes of difference,” he said in a speech after the war, “slavery …. was the secret motor, the mainspring of the war.”) Basically, he was a dashing, courageous, even romantic figure whose mixed record as a combat general has earned him admiration and criticism in equal measure.

Born and raised in Kentucky, Hood was a graduate of West Point’s class of 1853. He served as a cavalry officer in Texas, where he was wounded in a fight with Comanches at Devil’s River. Not yet 30 when the South fired on Fort Sumter, the striking Hood — 6 feet 2 inches tall, with blond hair, blue eyes and a thick, long beard — tried to enlist in a Kentucky regiment, only to find that Kentucky wasn’t going to secede. He then joined the Confederate army as a lieutenant.

Within a year, Hood was elevated to brigadier general, in command of a brigade of Texans, which became one of the most storied units of the war. Hard-fighting and hard-hitting, members of Hood’s Texas Brigade were known as Robert E. Lee’s shock troops, authors of stunning, table-turning attacks against Union forces at Fair Oaks, Gaines Mill, the Second Battle of Bull Run, Antietam and at the Peach Orchard and Devil’s Den at Gettysburg.

Respected on both sides, the Texans earned their reputation with blood. After Antietam, a fellow officer asked Hood where his division was. “Dead on the field,” Hood replied, and correctly; two-thirds of his brigade were casualties. The division also suffered heavy losses at Gettysburg; Hood himself was hit in the arm, which hung shriveled on his body thereafter.

Hood recuperated in Richmond, Va., where he was warmly received by Jefferson Davis and capital society. One of its central figures, diarist Mary Chesnut , wrote about him in August 1863. “When Hood came with his sad Quixote face, the face of an old Crusader, who believed in his cause, his cross, and his crown, we were not prepared for such a man as a beau-ideal of the wild Texans. He is tall, thin, and shy; has blue eyes and light hair; a tawny beard, and a vast amount of it, covering the lower part of his face, the whole appearance that of awkward strength. Someone said that his great reserve of manner he carried only into the society of ladies. Major Venable added that he had often heard of the light of battle shining in a man’s eyes. He had seen it once — when he carried to Hood orders from Lee.” By September, that fierce light was shining in Tennessee, where Hood again led his Texans in one of their characteristic assaults at Chickamauga. This time Hood lost his leg.

Hood again recuperated in Richmond, where he resumed his courtship of Sally Preston , the beautiful, intelligent, 18-year-old daughter of a wealthy South Carolina family. Buck, as she was known, was staying with Chesnut, and Chesnut very much wanted to introduce Richmond’s It girl to the Confederacy’s Most Eligible Bachelor. Eventually they met on a Richmond street; reportedly Hood studied her and then whispered a comment to a companion, Dr. John Darby . Later, Preston asked Darby what Hood had said. “Only a horse compliment,” Darby answered. “He is a Kentuckian, you know. He said you stand on your feet like a Thoroughbred.”

Hood did court Preston, and the attraction was mutual. Her parents, however, objected; Hood had no money, and was down to two limbs besides. The man who charged the guns of Devil’s Den took no for an answer. Preston said later that if he had proposed to her over her parents’ objections, she would have accepted.

In the spring of 1864, Hood was appointed a corps commander in Gen. Joseph Johnston’s Army of Tennessee. Facing troops under Gen. William T. Sherman, Johnston was practicing a strategy of maneuver that avoided conflict while stalling Sherman’s progress to Atlanta. An exasperated Davis wanted Johnston’s army to attack Sherman, and so he sacked Johnston and replaced him with Hood.

What Davis wanted was what Hood did best. Before long, Hood launched four assaults on Union forces outside Atlanta, one more disastrous than the other. Hood’s casualties were so heavy that he could no longer protect Atlanta, and he withdrew, burning the supplies his men couldn’t carry.

With him went the Confederacy’s last chance at winning independence. Little progress had been made by Union forces that year, and the 1864 election was in doubt. Abraham Lincoln believed he was going to lose to a new administration already pledged to negotiate an ending. But when Sherman took Atlanta, Lincoln was saved.

Hood suffered two more catastrophic defeats at Franklin and Nashville before he was relieved of command. After the war, he ran an insurance business in New Orleans married and sired 10 children. In 1879, a yellow fever epidemic swept New Orleans, killing Hood, his wife and their eldest child. The surviving children were split up and adopted by several families. He was 48.

An interesting figure, no? Gallant, romantic, courageous, tragic — one could think of many worse ways to spend a rainy afternoon than to read a novel based on Hood’s life. And who would deny him the honors earned by his service, his dedication, his sacrifice? One would think that on Confederate Heroes Day, which Texas marks every January, much time would be spent recalling Hood’s many virtues.

But continue to name a U.S. Army base after him? No, that time is over.

When Fort Hood was named, the Army was segregated, and our views about race more ignorant. Now blacks make up about a fifth of the military. The idea that today we ask any of these soldiers to serve at a place named for a defender of a racist slavocracy is deplorable. Can we really expect any of our soldiers to tell Afghans or Iraqis that they are there for their freedom when they have come from a place named for a man who fought to keep people in bondage?

More important, we simply should not name U.S. Army bases after people who fought the U.S. Army in battle. Not Hood, not the incompetent Pickett, not the KKK chieftain Gordon, not the sainted Lee. The gesture honors one man, while it denigrates the struggle and the sacrifice of every U.S. soldier who faced him. It mocks them. It mocks the union they preserved.

There are better choices, soldiers whose service and sacrifice reflect the best of our values, rather than the outdated concerns of our ancestors. During the 20th century, 37 U.S. Army soldiers from Texas won the congressional Medal of Honor. To read the citations of their actions causes one’s chest to swell with pride. Any of them would be a better choice than John Hood.

One of them, Capt. Jon Swanson, whose Medal of Honor was awarded posthumously after exhibiting astonishing courage in Cambodia in 1971, was a native of San Antonio and a member of the 1st Cavalry, based at Fort Hood. I suggest the search begin there.