Earlier in the week, the Texas Senate was paralyzed on the last day of a special session by a 12 1/2 hour filibuster against a bill banning late-term abortions and setting strict standards for abortion facilities. (See the Texas Tribune’s liveblog for a detailed timeline). The primary obstructionist was Sen. Wendy Davis (D-Ft. Worth), but after she was cut off her fellow Democrats continued the filibuster, followed by an uproar from the public watching the Senate which was so thunderous that it halted proceedings. Eventually the bill failed and the session ended.

With the exception of the ending, this filibuster illustrates several themes worth highlighting. But the last point is the real novelty: in the end, this was a citizen filibuster.

Filibustering is not unique to the U.S. Senate. The Texas legislature, in particular, has a long tradition of obstruction. In fact, the Texas Legislative Reference Library has counted more than 100 filibusters from 1939 to 2011. Texas also boasts the longest recorded filibuster in American history: 43 hours vs. Strom Thurmond’s measly 24 hours in 1957. Many readers will remember the 2003 filibusters in the Texas House and Senate in which legislators fled the state to deny the majority party a quorum.

The general point is that filibustering is not a freakish anomaly of U.S. Senate history; it is a general phenomenon which occurs in legislative settings where actors exploit their existing rules and prerogatives to block measures and gain bargaining leverage.  (See also: Rhode Island)

Note that Texas legislators utilize multiple forms of filibustering: quorum-breaking, dilatory motions (votes on procedural motions to kill time), and prolonged speaking. Also, the TX Senate has a previous question motion to limit debate, but that does not mean that filibustering is impossible. As in the U.S. Congress, the previous question motion does not override all rights and can itself be filibustered.

Before this abortion bill came up on the TX Senate floor yesterday, its passage in the TX House was delayed for hours by “chubbing,” in which members of the TX House, whose speeches are limited to 10 minutes, exploit all the time available to them for speaking, and throw in procedural motions as well. As this “Texplainer” notes, TX House MCs often  begin their chubbing on the bills preceding their target measure to delay its arrival on the House floor. In my book on filibustering (pg. 114), I explain this tactic of blocking buffer bills to compensate for the difficulty of blocking the target measure once it is on the floor.

Keep this in mind as the Senate discusses reform measures like the Harkin proposal to lower the cloture threshold over multiple votes on the same issue. It sounds like it would allow a majority to govern the Senate, but in practice it would create an incentive for the minority to “chub” a variety of buffer bills (via multiple cloture votes) to maintain their bargaining leverage.

Unlike the U.S. Senate, filibustering in the Texas Senate requires actual effort, as explained by the Texas Tribune:

During a filibuster, a senator is limited to topics relevant to the bill being discussed and cannot eat, drink or use the restroom during the speech. The rules also prohibit sitting or leaning on a desk or chair under any circumstances when the senator has the floor and is speaking on the bill or resolution.

Filibusters end either when the senator voluntarily yields the floor or after three violations of the rules for decorum and debate. After the third violation, the Senate can vote on a point of order, which if sustained would force the senator to yield the floor, according to the Legislative Reference Library of Texas website.

Davis had some experience filibustering, exercises regularly, and (unlike Rand Paul) planned ahead by wearing comfortable shoes. Still, after eight hours, she resorted to a back brace to maintain the effort of filibustering.

In the end, Davis was removed from the floor by the “three strikes” rule. This is a classic technique for clamping down on individual legislators (see Filibustering, pg. 22).

Note that the fine points of how one filibusters adds or subtracts from the difficult of an active filibuster. It would be easier to filibuster while sitting, or making repeated quorum calls, or sending documents to the chamber clerk to be read aloud. Standing and speaking is a grueling activity. A legislature that allows filibustering can nonetheless limit the power of obstruction by interpreting its rules to make filibustering as difficult as possible, and to make it as easy as possible to call members to order.

4) Germaneness is Hard…and Subject to Interpretation

One of Davis’s three strikes was due to the fact that another legislator helped her put on her back brace. The other two were “violations” of the germaneness requirement for discussing a) Planned Parenthood’s budget and b) a 2011 Texas law requiring sonograms before abortions. “Wait,” you might say, “both those topics have everything to do with abortion and access to abortion in Texas.” That is correct, but the proponents of the bill were looking for any opportunity to object that Davis’s speech was not specifically about the proposed bill.

The custom and precedents of the U.S. Senate, on the other hand, generally do not require senators to speak about the measure on the Senate floor. One exception is the “Pastore Rule,” adopted in 1964, which requires senators to speak about the bill on the floor for the first three hours of legislative discussion at the beginning of a new legislative day. During the mid-20th century, Southern senators blocking civil rights bills made a tactical choice to be “germane” when discussing these bills, but not by Texas standards. Their speeches were often vaguely related to civil rights bills, e.g. discussions of the history of the Constitution & states’ rights, the history of the filibuster, etc. If the U.S. Senate of that era had enforced a germaneness rule it would have been easier to defeat a filibuster.

5) the “official” record is…not so official

As the debate drew close to the midnight deadline, a crucial question was whether or not the votes to pass the bill occurred before midnight or after. As recounted in detail on the Texas Tribune liveblog, the official records first indicated that these votes were finalized on June 26—after midnight. Subsequently, someone edited the records to indicate that the votes occurred on June 25, and therefore were legitimate. After a prolonged caucus meeting, the majority party returned to the Senate floor and conceded.

But what if they didn’t? Actually, the U.S. Supreme Court has weighed in on the presumed validity of legislative journals in U.S. v. Ballin (1892):

[I]f reference may be had to such journal, it must be assumed to speak the truth. It cannot be that we can refer to the journal for the purpose of impeaching a statute properly authenticated and approved, and then supplement and strengthen that impeachment by parol evidence that the facts stated on the journal are not true, or that other facts existed which, if stated on the journal, would give force to the impeachment.

In short, the official record is official. If it has been doctored, well, who are we to judge?

Two days ago, I had not heard of Wendy Davis. Now I have. In the space of twelve hours, her name became a national phenomenon courtesy of social media. CNN notes that there were at least 730,000 tweets about Davis, including this gem:

This is not unusual. Rand Paul gained attention during his March 2013 filibuster. While I cannot claim that this action was the only cause, it likely contributed to his subsequent victory in a straw poll of conservative activists and an early poll of New Hampshire Republicans. Earlier in Senate history, Strom Thurmond’s 1957 filibuster was done entirely for publicity (to the chagrin of his Southern colleagues), and Huey Long made an all-too-brief career out of spectacular filibusters. Robert La Follette’s 1908 filibuster against banking legislation was a cornerstone of his public reputation and was often mentioned as his most prominent action.

If the current U.S. Senate revises its rules to require more “talking” filibusters, it is noteworthy that this will have a profound effect on individual senators and the chamber they serve. There will be a greater opportunity for senators to forge a national reputation by making a carefully selected stand on some issue or another, and we should expect many senators to take this opportunity—often to the detriment of the majority party.

7) The Whole World Is Watching…And Filibustering

The real surprise of this filibuster is that, in the end, it was won by the crowd.

A classic argument for allowing filibusters is that they give legislators time to rally public opinion and get a sense of what their constituents really want. In the 1939 film Mr. Smith Goes to Washington, this is one of Smith’s goals: to give the masses a chance to voice support for their cause. Except, in the 1930s, this is not a realistic expectation:

Mr. Smith hears from “the people”

Smith’s access to public opinion is mediated by a hostile media, and in the end he gets Astoturfed by fake telegrams. In 2013, however, obstructionists have direct and immediate contact with the world.

But the crowd was not just virtual. During the day activists on both sides crowded into the Texas capitol and into the Senate galleries.  (blue = pro-bill; orange = anti-bill) 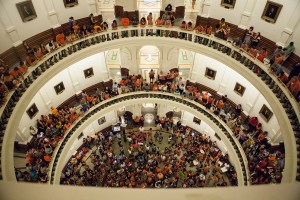 Davis’s filibuster ended around 10 pm when the presiding officer called her third “strike”. Other Democrats stretched out the debate with an appeal of the third strike and a series of time-killing parliamentary inquiries. Nonetheless,  the majority managed to finish votes to end debate, reject points of order, and (it appears) begin voting on final approval of the bill (concurring with the amendments of the House) before midnight.

Here we should note that there are lots of ways for legislators to vote. Thomas Edison developed an electronic voting machine for legislatures in 1869, but the U.S. House did not adopt electronic voting until the 1970s. U.S. Senators still vote by responding verbally when their name is called. In the Texas legislature, the clerk calls out a name and senators hold up one finger (aye) or two fingers (nay).

But what if senators cannot hear their names called? What if the galleries are filled with shouting, screaming, stomping, citizens trying to drown out the voting process? As it turns out, this is not a hypothetical.

As the votes unfolded, the onlookers became part of the filibuster. 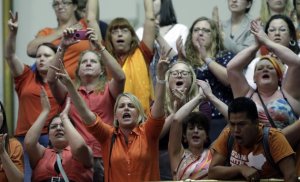 You can hear the audio here starting about the 12:34 mark. The noise was part of the strategy, as the Texas Tribune’s liveblog notes:

The noise continued for nearly ten minutes unabated. At 11:55, a man on the second floor balcony removed a black “Rick Perry Sucks” T-shirt and began waving it as a banner. The crowd somehow began screaming and yelling louder. As every minute passed, activists put up fingers in the air to signify how many minutes were left until midnight.

The senators couldn’t hear, so they couldn’t vote.

While Davis and the other senators helped extend the debate into the final hour, in the end it was the crowd that killed the bill. And that makes it a unique filibuster.