Following the death of Mao in 1976, abandonment of collective farming lifted millions from poverty and heralded sweeping pro-market policies. How did China’s excess in male births respond to rural land reform? In newly-available data from over 1,000 counties, a second child following a daughter was 5.5 percent more likely to be a boy after land reform, doubling the prevailing rate of sex selection. Mothers with higher levels of education were substantially more likely to select sons than were less educated mothers. The One Child Policy was implemented over the same time period and is frequently blamed for increased sex ratios during the early 1980s. Our results point to China’s watershed economic liberalization as a more likely culprit.

Here’s what was going on: 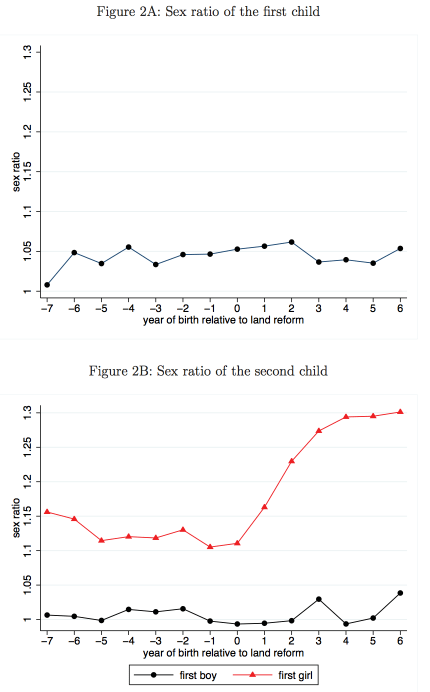 Powerful stuff. I just have a few suggestions on these graphs:

3. I’d prefer to present this as percentage girls (48.5%, etc) rather than sex ratio. To me, the percentage is easier to understand. But I respect that the tradition in this field is to work with the ratio.

4. Label the lines directly on the graph. For chrissake, don’t use a legend, that’s just silly.

Also, please do something about Figure 1 in the paper (not shown here). That sort of double-y-axis graph is at best confusing and at worst misleading. And I don’t really like Figure 3B. I just have an intuition that there’s a better way of displaying this information. Maybe using a series of maps? Finally, I’d replace all the tables with graphs (of course).