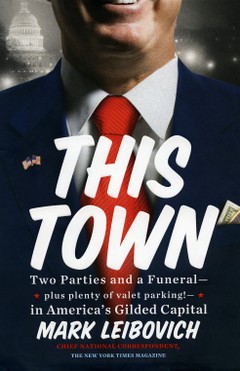 Here is the thing about political non-fiction: those who read it usually know what it will say in advance. Game Change, the 2008 election book by John Heilemann and Mark Halperin, is the archetypal contemporary example: here was a dramatic re-telling of a story that had just been told barely months earlier as it actually happened. What’s left, beyond one or two juicyish scoops, is a rehashing of things that were clear to anyone who’d read the headlines during the campaign: Obama is aloof and a little arrogant; the Clintons relish power and have made some poor hiring decisions, and Bill struggles to keep both his mouth and his zipper closed; John Edwards is a lightweight narcissist with horrible judgment; Sarah Palin is an unstable narcissist whose selection took horrible judgment; McCain is short-tempered and can swear a blue streak; no one likes Romney; the economy collapses; Obama wins and, get this, picks his former opponent as his secretary of state; the end.

So in terms of offering up original material or suspense, books like this are handicapped. They succeed or fail, then, in their ability to advance a larger point or unveil an unseen truth about their subject material, which in the case of this book is its own readership. Mark Leibovich’s This Town: Two Parties and a Funeral—Plus, Plenty of Valet Parking!—in America’s Gilded Capital has been widely anticipated with both glee and girded loins in the capital city, to the point where the publishers saw fit to put a tongue-in-cheek “warning” on the dust cover: “This Town does not contain an index. Those players wishing to know how they came out will need to read the book.” So in this dissection of D.C. culture, does Leibovich, the national correspondent for the New York Times Magazine, manage to offer said players anything they didn’t already know about themselves? And can he offer those on the outside, those who aren’t just reading it to see how well they come off, something worth knowing about This Town?

The critical consensus is still forming. Salon’s Alex Pareene says that “if you hate Washington, you really ought to read this book to hate it with more clarity and specificity.” In his view, it succeeds because its thesis, that D.C. culture is an incestuous, navel-gazing, conflict-of-interest-laden “self-perpetuation machine,” may be obvious to some but not to those most responsible for and deluded by said culture: “These people practice a form of corruption in which the corrupt individual literally cannot understand why anyone wouldn’t consider him or her a stalwart and productive member of society.” David Shribman, Executive Editor at the Pittsburgh Post-Gazette, is willing to assign a little more agency to Beltway people than Pareene but otherwise essentially agrees with his premise in the New York Times, stating to This Town’s subjects that “Mark Leibovich is on to every one of you, and his portrayal of [D.C.] is spot on. Because Mr. Leibovich, perhaps alone among capital insiders, has realized that Washington, once an inside joke, now looks more and more like a bad joke.”

On the other hand, Dylan Byers of Politico, in a meta-review of Shribman’s take (“The worst This Town review yet”), says essentially that yes, actually, it is an inside joke and Leibovich and Shribman are the ones not getting it: “This book isn’t an eye-opener for anyone in Washington; it’s that moment in Casablanca when Captain Louis Renault declares that he is ‘shocked – shocked – to find that gambling is going on in here!’”

I’ve lived in This Town for all of two months now and found nothing in the book to be particularly surprising in the political-intrigue sense. So Byers is not really wrong. But absent from his and the rest of Politico’s defensive crouch and schoolyard deflection tactics in response to the book, epitomized by a bizarre anticipatory “review” that attempted to pre-spin and minimize the book as jejune and unoriginal while reeking of unironically insidery bluster and badly feigned indifference, is any sort of acknowledgement that “how it is” might in fact be problematic. The correct response to an indictment isn’t “DUH.” Critics’ inability to engage Leibovich on the merits of what amounts to a mostly observational book is probably the strongest testament that he has produced something of significance, or at least said something that needed to be said.

And Leibovich says it well. Anyone familiar with his writing for the New York Times Magazine will find This Town’s sprightly prose familiar and, for the genre, refreshing (there is agreement among admirers and detractors of the book’s overall mission and worth that it is at least well-written). A difference: Leibovich’s wry and irreverent humor, which takes the form of exaggeratedly quirky metaphors, winking asides and parentheticals, or feigned shock at some D.C. convention, is on display more in the book than in the Times, and happily so. Without levity, the book would be dourly cynical. With it, it is transformed into something much more palatable (tone is important for a book like this, and Leibovich, given his background, knows this better than anyone). One minor issue: a few awkwardly introductory references to themes and players previously mentioned make it a little too obvious that parts of the book have been stitched together from pre-existing articles. This combined with occasional typos—a dropped preposition here, a mixed tense there—can be distracting, but also gives one the impression that This Town burst forth from Leibovich in a single sitting, in a sort of everyone-is-thinking-it-I’m-just-saying-it fit of bluntness—as such a book probably should be.

This Town has been widely described as a “takedown,” but it is not written in a polemical style. Despite that conveyed sense of urgency, the overall approach is more Heilemann and Halperin than Hitchens. The book is really just a collection of observations and statements of fact; yes, its tone is occasionally mocking and editorializing, and when Leibovich’s B.S. detector redlines, as it does at the insider description of the White House Correspondents’ Association Dinner as “Nerd Prom,” he lets us know:

This is one of those self-congratulatory Beltway terms masked as self-deprecation. ‘Nerd’ implies that everyone would of course much rather me immersed in the deep wiring of some issue, something of weight and substance—they are ‘nerds,’ after all—rather than this obligatory fizz.

But the strength of Leibovich’s critical voice is his very un-Washingtonlike willingness to let events, statements, and personalities speak for themselves without immediately trying to explain to us What This Development Means. It taciturn treatment of the question that gossip columnists would descend on it to definitively answer—“WHY WASHINGTON REALLY IS JUST THE WORST”—is its greatest strength. The version that Leibovich offers asks, rather than demands, of Beltway people: “So. What are you gonna do about it?”

This is in many ways the book for the moment, as the extent of D.C.’s captivation with itself has perhaps never been greater (actual quote: “Today’s Washington media has also never been more obsessed with another topic that has long obsessed the Washington media: the Washington media”). Suspense is not the point, nor is surprise: indeed, the suspense was for this book to be finally written, and the surprise was who would be the one to do it. The humorist Dave Barry once quipped that Washington is populated by “people you hated in high school,” and, writes Pareene, “these people know they’re hated,” even if they lack the self-awareness to quite grasp why. This Town is just the other shoe dropping. For some, like Politico’s Byers, the reaction will be defensiveness and the soothing thought that the “haters” (Politico’s term) just don’t get what the Club (Leibovich’s term) is really all about. For others, This Town will be canonized as part and parcel of the very culture it critiques; one imagines certain subjects treating the number of mentions they receive as humblebrag material at D.C.’s next power wedding or funeral.

But Beltway creatures are not all dumb: they have cleared substantial hurdles to get here, after all. And in seeing themselves thusly portrayed, there may be among a few of them a moment of self-awareness. This Town, if it seeks to do anything beyond just reaffirm cynics’ perceptions of the status quo in Washington, tries to disrupt it—and demand reflection and reassessment among the true believers in the way that only the bluntest criticism can accomplish. In this sense, it embodies public-service journalism in the spirit that the culture it critiques has so emphatically rejected: it insists that its subjects confront hypocrisy and shamelessness and plainly shows them the consequences of refusing this call. Considering their influence (as depicted in the book), if it hits home even for just a few of its targets, it will be the most significant work of political non-fiction in quite some time.

How’s that for a game change?